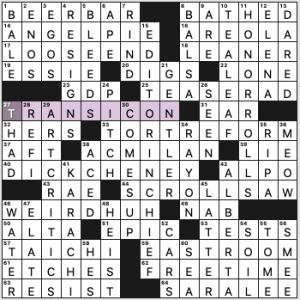 Seemed a tad tough for a Friday puzzle, possibly because I don’t know my biblical geriatrics or the dessert at 14a, and I had ELLEN instead of ESSIE for 19a. [Woman’s name that sounds like two letters of the alphabet]. Took a while to unravel all that!

Not so keen on AFT., SMEE, or that single TEA LEAF.

Theme: Each theme answer is a world location containing three pairs of circled letters which turn out to be three state abbreviations. So they are, in a way, “tri-state areas.” Note there are numerous tri-state areas in the U.S. as listed here. 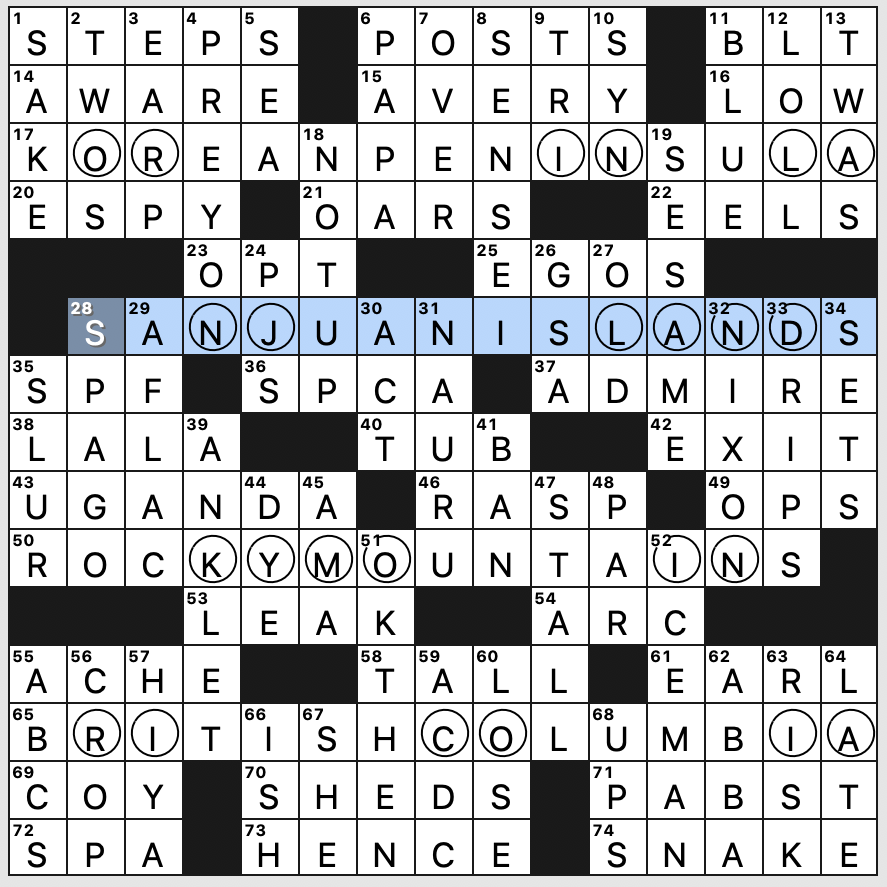 I was really hoping there would only be one instance of each state, but maybe that’s too much to ask for. Otherwise, this was really elegant and enjoyable. It is surprising that TRI appears at 9d when it’s also in the title.

Maybe because there’s so much theme material (two 14s and two 15s), there’s not a single bit of fill longer than six letters. I did like “OK THEN” and UGANDA which I noted has two states (Georgia, North Dakota) of its own.

Not much in the way of sparkly fill in this grid, but I did enjoy the theme. 3.9 stars. 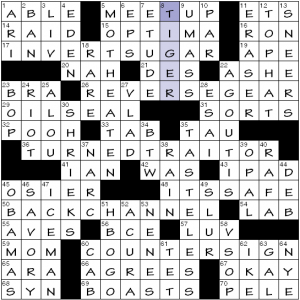 Theme is phrases parsed literally as signals to spell things backward. The answers are common phrases.

That’s about all I have to say. Fine theme, mostly good ballast fill, so a moderately pleasing crossword overall. 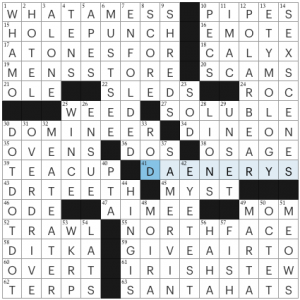 A smooth 68-worder from Patrick to close out the New Yorker’s puzzle week. My favorite entry is DOT DOT DOT, [You can imagine what happened next]. This pairs well with the SEX SCENES on the opposite side, where little is left to the imagination.

Other fave fill: HOLE PUNCH, DAENERYS, NORTH FACE, MOIRA Rose, DR. TEETH, and my beloved ETYMOLOGY. It’s nice to have relatively few (8) 3-letter words in a grid, less risk of ungainly abbreviations. Since this is a Berry, it stands to reason that the 4s and 5s holding the long stuff together will also be entirely smooth.

I suppose a 20-year-old solver might not know fictional WKRP and Mike DITKA, so that K could be a tough crossing. I was an ’80s teen, though, so these were gimmes for me.