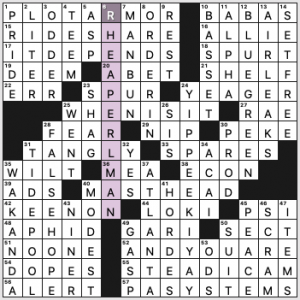 Iffiest crossing: 49a. [Ginger at a sushi bar], GARI meets 24d. [Exclamation popularized by “Die Hard”], YIPPEE-KI-YAY. I’m not entirely confident that the world has settled on one particular spelling for the latter, and the former was new to me (making a mental note of GARI).

Question about 13d. [Caulking might prevent them], AIR LEAKS: I’m familiar with caulk being used to seal water leaks. What sort of caulking applications seal up air flow?

Lots of nice clues, but I gotta run now so I’ll sign off at four stars. 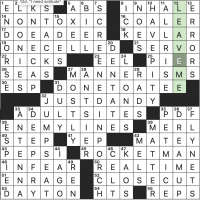 I think I have done one or two other Freddie Cheng puzzles, but it is not a byline I know that well. This one wasn’t too difficult, but there is a nice stack of 9- and 10-letter words in the center, which is what draws your eye to this grid immediately. The corners are also quite wide-open, and this puzzle, in typical LAT fashion, has very little obscurity in this challenging grid. Very well done! Freddie, nice puzzle! Keep ’em coming! 4.4 stars from me.

Off to work of some puzzles during this long weekend! 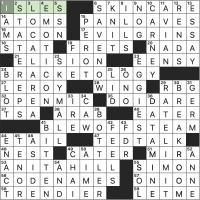 The byline here says “Stock and Vazquez,” which I can only assume is Matthew Stock and Quiara Vazquez, as those names are in the constructor database. Please correct me if I am wrong. This wasn’t too difficult for me, but still a challenge. I think this was just in my wheelhouse. My theory that they are harder during holiday weekend has some holes this time! But I had fun, and that is what matters! 4.6 stars from me.

Everyone have a safe and healthy long weekend!

Title says it all!

THEME: -IT is added to common phrases and wackiness is born. 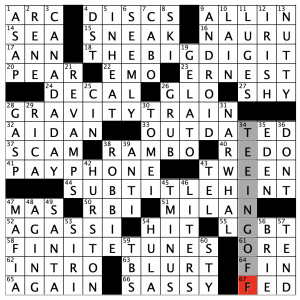 I’ve never heard the phrase THE BIG DIG. Have absolutely no clue what it refers to. An insult? Archeology? Let’s look that up… Oh. It was a highway project in Boston. That’s not as exciting as I was hoping for. Learned something though!

I’m not typically a big fan of cross-references but very much enjoyed the PAYPHONE / OUTDATED reference. Especially because I uncovered PAYPHONE first and thought to myself “Well, that’s outdated….”

A FINE (and FINITE I suppose :) puzzle today. 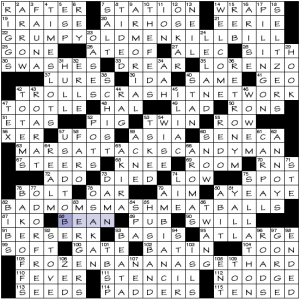 I get that there’s a thing—especially (apparently?) in soccer aka football—called a “marquee matchup” but I can’t help thinking that a better title might be the punnier “Marquee Mashup”:

§ Okay, so right away I knew the general principle of what was going on, but went slightly in the wrong direction. Completing this as GRUMPY OLD MEN AND WOMEN, I figured Ms Thurman was in an adaptation of the Hemingway story Men and Women, but I was wrong on numerous counts. First, the title of that work is Men Without Women, and second, I was probably vaguely thinking of Henry & June. But I soon enough saw the errors of my ways. §

§ Oh hi, me again. I suppose ‘mashups’ wouldn’t be an acceptable title, since (unlike my original attempt, described above, there is no overlap of title words; just concatenation. §

This was an amusing set of theme answers. I appreciate that in choosing actors to represent the films, the constructor and editor made an effort to approach gender parity. 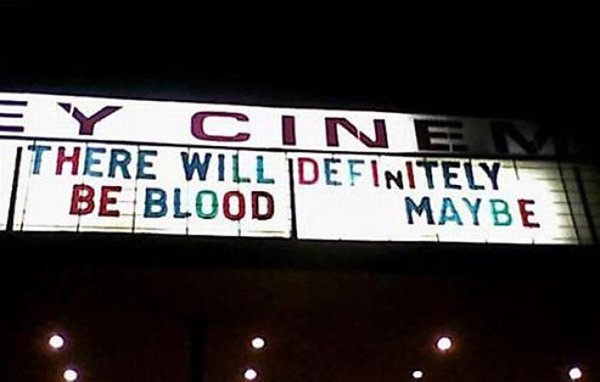 Overall a fun crossword, not bad for a début(?).