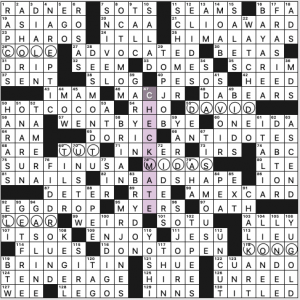 True confession: I went to Wordplay to read the theme explanation. In chess, you can lose via CHECKMATE, clued as 47d. [One ending for a classic board game – another of which (when a player resigns) is represented visually six times in this puzzle]. Apparently when a chess player resigns a match, they knock their king over, and it’s supposed to look like those Down theme answers have caused a king (the king’s name, whose letters are hidden in that longer answer) to be knocked over to the side. If you’re not a chess person, this might not resonate at all as a sensible way for the theme to work.

It bothers me that the theme entries aren’t placed symmetrically; 4d and 106d aren’t paired, and none of the kings appear opposite another grid ruler. Is there a reason the tipped kings all have to appear to the left of the thematic Downs? It also bothers me that CHECKMATE is the revealer when the theme is visually representing an entirely different way of ending a match. DESMOND TUTU and YUKON GOLD potatoes are timeless, though.

Less appealing: MAC JR (a fleeting McDonald’s menu item not currently on the US menu), INKER and TILER, RAP CDS (CDs don’t have genres, just the songs and albums contained on the CD do), GARY IN, the dreadful LENDEE, UNSTOW and UNREEL.

Theme: Familiar phrases whose last words can also be actions performed while driving a car. 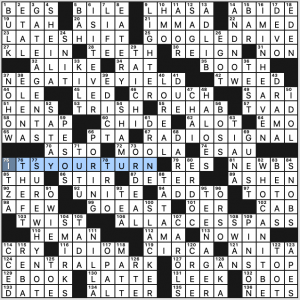 You’ll have to forgive me, I’ve been teaching my daughter to drive even though she’s already a full-fledged adult at 22! Sheesh! (In her defense, we were living abroad during her high school years so we decided to wait.)

Anyway, this was an enjoyable theme. I especially like the consistency in that each word is a verb you perform as part of a typical drive. I also like that the terms are in a relatively logical order. This isn’t an obvious run-of-the-mill theme, and that’s what I like about it.

Impressive grid with a fresh theme (and lots of it) and plenty of sparkly fill. Four stars. 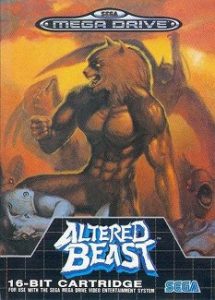 Lest you think that title is “Not a Thing,” you can rest assured that it is indeed. If you’ve solved Evan’s puzzles for long enough (or maybe even just a few?), you’d know he has a penchant for video game inclusion. Any video game. He’s not picky. I mean… look at the cover for this one! That exists!

THEME: Animals can be found scrambled in common phrases 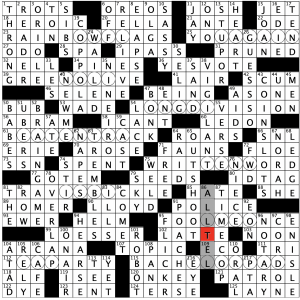 This theme type isn’t my favorite. For me, it doesn’t lend itself to a synergy where the theme and the fill work together to get through tough spots. I solve this type of puzzle mostly as a themeless, and then I figure out the scrambled words later. I noticed FOWL first**, just to make sure I understood the theme. IGUANA stuck out clearly, and ANTEATER was bizarre enough that I stopped mid-solve to figure it out. The others I haven’t looked at yet, so I’ll do those now.  Let’s see… LION, APE, MOLE, IBIS, NEWT… what are those last two? Ah! LEOPARD and DINGO.

As far as execution goes, it’s very solid. The base phrases are all in-language, the animals bridge the two-word themers, and the animals are all well-known enough (although I probably wouldn’t be able to identify a DINGO in a lineup. I just know not to let them near babies).

Had much difficulty in the Southeast of the puzzle. Couldn’t get FOOL ME ONCE for the life of me (needed almost every cross for some reason) and ALLTELL, POACHES, TIMECOP, and CORDON were coming in very slowly. Didn’t know Kiki LAYNE down there either. But a bit of elbow grease and it came together.

**I’m just realizing something right now… In a Birnholz puzzle like this one, there has to be another layer to kick it up a notch beyond a concept that could be employed in a 15×15 crossword grid. Let’s check the first letters of each of the animals in order.

Okay, let’s change FOWL to WOLF shall we?

And just like that, I’m much more satisfied. Did I miss a nudge in the clues that asked us to look at first letters? I would love if that nudge wasn’t there. I’m not going to check.

THEME: Common phrases reimagined as if they’re units of storage. 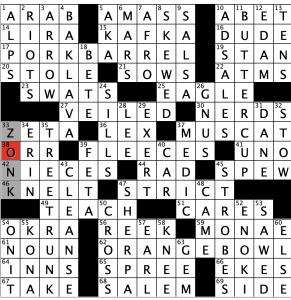 Cute theme here! Tight and consistent. I suppose there are a few more entries one could find to fit the theme, but I enjoyed these choices.

Filled fine. Nothing really caught my attention much, except perhaps the reference to a TikTok starring FETA cheese. I’ll have to look that up. My students finally forced me to download the app. Very easy to see why it’s so addictive.

Mr. Happy Pencil took a few moments to appear. Had to correct ZONK (had CONK) and I’d misspelled VEILED (VAILED). Easy fixes to find though.

Each theme answer is a job title clued – differently. 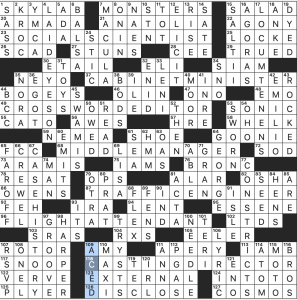 Please please please can we retire ETAIL? Please? Also: ONE L by Scott Turow is not a novel. The subtitle is “The Turbulent True Story of First Year at Harvard Law School.” It’s a memoir. Turow has written novels. This isn’t one.

What I didn’t know before I did this puzzle: that Terry O’Quinn played LOCKE in Lost.