This theme made me smile! I had no idea what was going on until I got to the revealer, which is at the bottom as all good revealers should be. 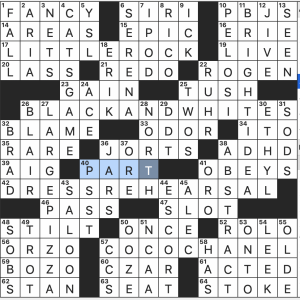 What do they have in common? We find out at 57a. [Fashion designer associated with the item spelled out by the starts of 17-, 26-, and 42-Across]: COCO CHANEL is credited with popularizing the LITTLE BLACK DRESS. Fun! Nothing in the fill slowed me down or jumped out at me as un-Monday-ish.

What I didn’t know before I did this puzzle: that a tie in tic-tac-toe is called a CAT‘S GAME. Is that common knowledge? If not, maybe it shouldn’t be in a Monday, which is a shame, because the rest of the puzzle is a gem. 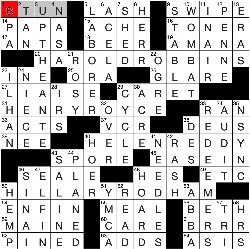 Hope you’re enjoying some HOLIDAY REVELRY today. Perhaps you’re in a HOUSE RENTAL or driving a HOT ROD? If any of these are true, you have a head start on solving today’s LAT. The theme, as revealed in 58D [Personnel depts., and what the personnel in 20-, 31-, 40- and 50-Across have in common] is HRS. Do people refer to human resources departments referred to in the plural as HRs? I’m asking. I haven’t. In any case, all of the theme entries are people whose initials are HR.

I’m not wild about this theme. “Names that have the same initials” is so straightforward that it almost has to run on a Monday, but the set of potential theme entries is so constrained that I think the constructor had to dig a little too deep. HELEN REDDY, awesome. HENRY ROYCE…sure, Rolls-Royce is well known, but I doubt most solvers could give you a first name on either. The novel cited in the clue for HAROLD ROBBINS came out 60 years ago, which would be fine if his books were widely read today, but based on my extremely cursory Googling it sounds like they aren’t. And HILLARY RODHAM has been HILLARY CLINTON for nearly 40 years.

I don’t think the “personnel” bit in the revealer clue is enough to make this puzzle better than it would have been if, say, the constructor had decided to have a long revealer of HR DEPARTMENT, which would then open things up to common phrases like HOTEL ROOM, HUMAN RACE, HEART RATE, etc., rather than just constraining the list to people’s names.

Good morning! Kameron made me think this morning. 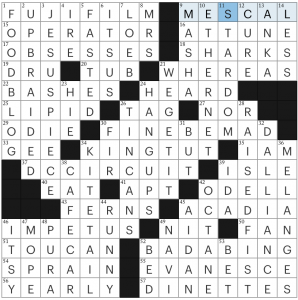 What I didn’t know before I did this puzzle: that KING TUT was Akhenaten’s kid, and that AIDAN Gillen appeared in Game of Thrones. Everything I know about GoT, I learned from crosswords.