This week we’re told, The answer to this week’s contest crossword is an ingredient used by cooks. I initially identified five potential themers: the four long acrosses (RAWNERVES, etc), plus the center entry (EGGLESS). I also spotted the last horizontal grid entry (ROMAN, clued as “Like some numerals”) while solving the grid. One of Mike’s signature moves is to use that entry as an additional clue, which seemed to be the case here, tying back to the title.

There are seven ROMAN numerals: I, V, X, L, C, D and M. I scanned the grid, and noticed my potential themers each contained exactly one, and the “I” and “M” were missing. ROMAN had the “M,” and JOINS (first horizontal entry) had the “I”. That was the only “I” in the grid, which is definitely not normal (frequency analysis suggests there should be 12). Further scanning revealed that each ROMAN numeral appeared exactly once in the grid (and in numerical order), revealing the seven symmetric themers:

Now what? I tried a few go-to meta moves, such as mapping 1, 5, 10, etc., back to the grid. That approach fizzled out quickly (there is no grid square 100, 500, etc). I tried to spell something with the numerals and got noise. Then I took a brief detour to Pudding Lane: 1 + 5 + 10 + 50 + 100 + 500 + 1000 = 1666, the year of the Great Fire of London. And it started at Thomas Farriner’s bakery! That (kind of) matches our cooking theme. I continued my aimless mental stroll through the streets of 17th century London, fruitlessly hunting rabbits. Then I reminded myself: the meta mechanism has be be explained in a couple of  sentences in Monday’s WSJ crossword, and I was miles past that. 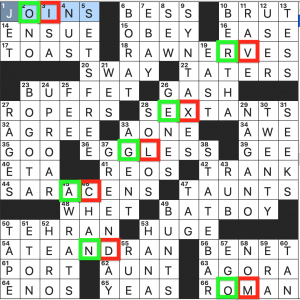 So I put the meta down for a while. Upon return: I tried to use the title (Cooking by the Numbers) to find step 2. My “aha” moment came when I wondered if “by the numbers” meant next to the numbers. Sure enough, the letters preceding each ROMAN numeral spell OREGANO, our contest answer.

Another impressive feat of construction by Mike. Using each Roman numeral exactly once (and in order) in symmetric entries was neat. Creating a grid with exactly one “I” cannot be easy, especially without loading the grid with crosswordese. I thought the fill was… different, but clean. I got bogged down in the southeast corner for awhile, but AGORA unlocked the rest for me. Finally: some rabbit holes are frustrating, but I enjoyed learning more about the Great Fire of London, and I will probably never forget that it started on Pudding Lane. Please let me know about any rabbit holes you found, real or imagined, in the comments. I’ll leave you with my favorite cover of the Grateful Dead‘s 10d, by Los Lobos, off the amazing cover album Deadicated.