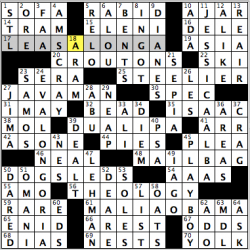 Hello everyone! Just like that, we’re in June! Hope all of you are doing well and that you were able to make the best of your holiday weekend.

There are a number of A-plus women that feature in today’s grid, as each celebrity mentioned in the theme set is a woman whose first name and last name ends with the letter “a.”

I’m also certain that when archaeologists came across JAVA MAN, there were also remnants of coffee grounds nearby (27A: [Mr. Coffee?]). Any pig Latin makes a crossword more fun in my opinion, and now I need to incorporate AMSCRAY more in my everyday conversation (4D: [“Beat it!”]). Only real slowdown for me was initially putting in “doled” instead of DEALT (39D: [Gave out, as cards]). The nickname mentioned in ALI, given her father’s famous line, is one of the best sobriquets in sports (33D: [Boxer Laila nicknamed “Madame Butterfly”]). Crossings definitely bailed me out for entries such as ELENI (15A: [Title role for Kate Nelligan]) and ARAM, though the latter might have been a tough one to get if Lea Salonga was also not in one’s wheelhouse (18D: [William Saroyan’s “My Name is ___”]).

“Sports will make you smarter” moment of the day: PLAYBOY (45D: [Casanova]) – Four years after its founding, the lifestyle magazine Playboy got into the sports game, as it began selecting a preseason All-America football team. Playboy also released a preseason college basketball All-America team, which definitely gave many the excuse that they were reading the magazine “for the articles.” A photo shoot accompanied the All-America team selections, though a number of players who were selected on teams declined to appear in the magazine, a number of them citing ethics concerns. Below is the 1978-79 men’s basketball preseason All-America team, which includes Larry Bird (far right, standing) and Darrell Griffith, a.k.a. “Dr. Dunkenstein” (sitting, Louisville), one of the men who helped introduce the “high five” gesture to the world. Seriously! (Look up the 1980 Louisville basketball team and “high five.” You’ll be amazed!) 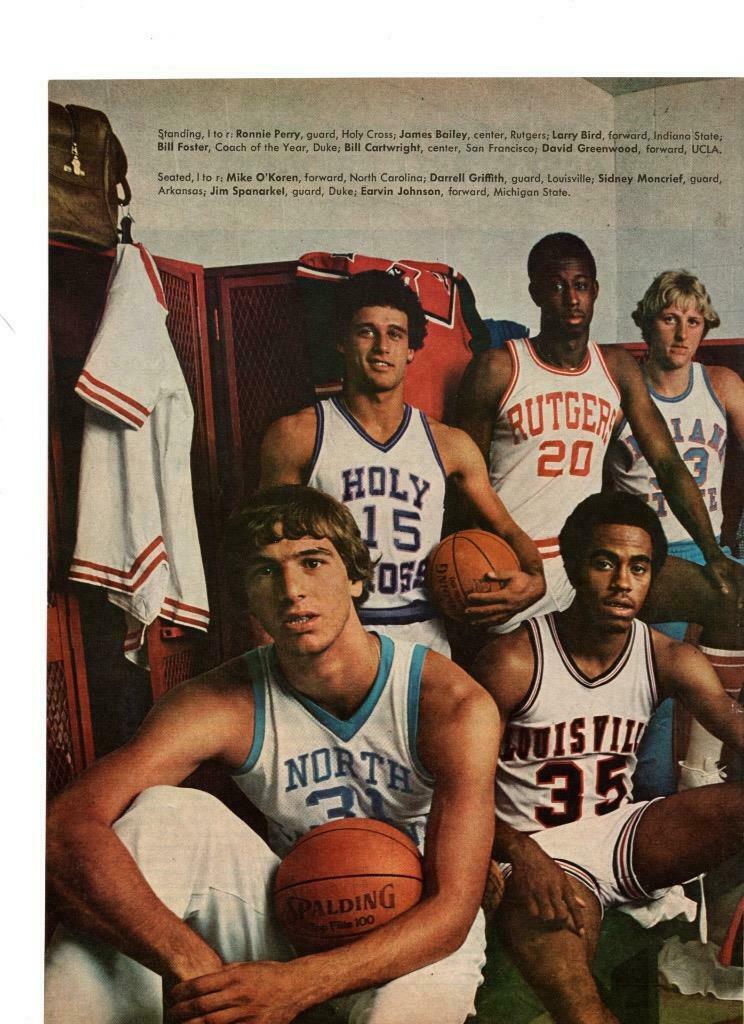 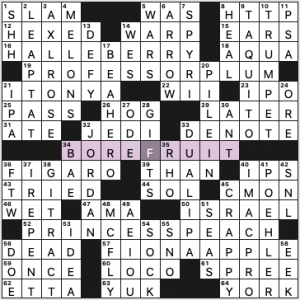 The “names with a kind of fruit in them” concept isn’t new, but Finn’s brought in a different angle for the revealer: 34a. [Turned out successfully … or what the parents of 16-, 19-, 52- and 57-Across did?], BORE FRUIT. With two of the fruit folk being fictional, this parental angle isn’t entirely applicable. Here are the botanicals:

I do like that the theme included two real women. I don’t remotely mind that the PROFESSOR PLUM game character is male while the other three themers are female—too often, seeking thematic tightness has led to all-male theme sets. I’m OK with having a mix. Also OK with including nonbinary people—and curious to see how (and when) the various showbiz awards that split actor/actress or male/female artist into separate categories adjust to reflect reality.

1-Across brought a smile to my face today. Not the clue. Not the entry. The note:

The next few weeks of crosswords were made by LGBTQ+-identifying constructors. Tweet at us using #UniversalXwordPride.

And what a great puzzle to kick off the celebration.

THEME: It Gets Better. 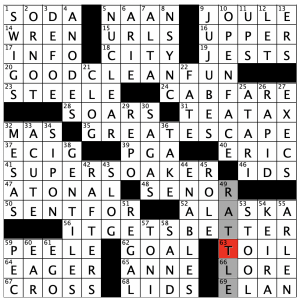 I saw the theme taking shape and was rather surprised when I got to a revealer clue. I thought the theme was just having phrases that start with synonyms for “good” or whatnot. Why does that need a revealer?  I thought. Then, wow. Perfect.

The It Gets Better campaign has had such a positive impact since its inception. I’ve seen its effect first-hand as a middle school and high school teacher, especially being close with many students who are establishing and discovering their individual identities. I love that it’s being celebrated in a puzzle, and executed so well by Emily Carroll, whose puzzles are always a pleasure to solve.

A few other nods to LGBTQ+ today in the fill/clues to introduce the underlying theme of the month:

I’m sure I missed a few. Feel free to point them out :)

Looking forward to the month ahead! 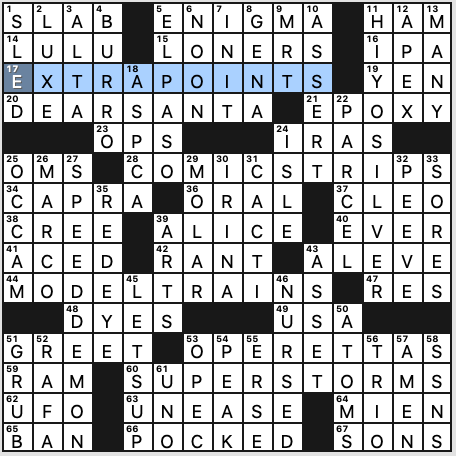 A very nice, consistent set of themers. Both words change meanings in each phrase, and all the changes are made the same way throughout the set. Well done.

4d. [Pack animal]. BURRO. I’m reminded of the scene in Butch Cassidy and the Sundance Kid where the guys are in Bolivia trying to go straight. They interview with a two-bit pack-mule boss who hires them to transport gold over the mountains. This old timer is constantly spitting tobacco and either shouts “Bingo!” after a successful spit or “Dammit!” after a failed one. Of course, you already know the scene I’m talking about.

13d. [Numerous]. MANY. I’m reminded of the end of Butch Cassidy and the Sundance Kid where the guys are about to have it out with what amounts to the Bolivian army. Oh, sorry.  That’s probably enough BCATSK references.

A very nice puzzle all around. And it seems to have inadvertently reminded me of one of my favorite films of all time, so it might be time to rewatch it. Sounds like a plan. Four stars from me. Bingo! 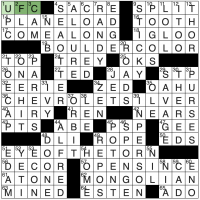 I needed the revealer to see what was going on, since while I was zipping through the solve I didn’t notice it at the time. I had a feeling something was removed from some phrases. I was right!

I figured it out by the time I got to 51-Across. We are indeed removing ADO from Boulder, Colorado, Chevrolet Silverado, and eye of the tornado. Very nicely done. And not too hard, which is nice since it is a holiday week! 4.3 stars from me today.

I’ll stop there. Back to work! 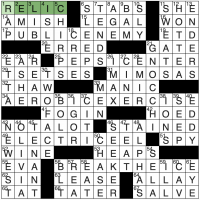 Another new name in the constructor database! Is this a debut? If so, congratulations! Our theme, though, is kinda reminding me of the still lingering cold weather:

Well done! Nice and simple, yet plenty of solving pleasure to be had. Nitpickers will note that they all “break” the same way except for one, but that is, truly, nitpicking. I find not issue with it. There is a nice wide-open grid as well! Not easy to do with several theme constraints. If this is in fact a debut puzzle (as well as a debut collaboration!), then this team can continue to produce puzzles with my blessing! (Not that that is needed!) 4.5 stars.