Theme: Head coverings are hidden in familiar phrases placed in the long Down entries. 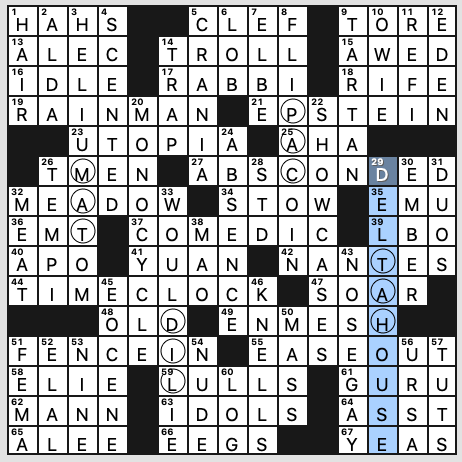 This didn’t do much for me. Three-letter words hidden in base phrases just doesn’t seem like much of a theme. There are so many kinds of hats, there have got to be some that are more than three-letters-long that can be found in other phrases. The entries themselves are nice, but I was disappointed in the gimmick.

It didn’t help that there’s a fair amount of kludge in the fill starting at 1a with HAHS and ending at 57d with TUTS. In between there are T-MEN, LBO, EEGS, the river ELBE, Italian plural TEMPI. I’m fine with APO, since that was part of my address for years, but to most people, it’s probably just crosswordese.

There are definitely nice things here: RAIN MAN, SHOWCASES, TIME CLOCK, MONOCYCLE, UTOPIA, MEADOW, NOSEGAY, and Beatles manager Brian EPSTEIN. But these felt bogged down by the lesser entries above. 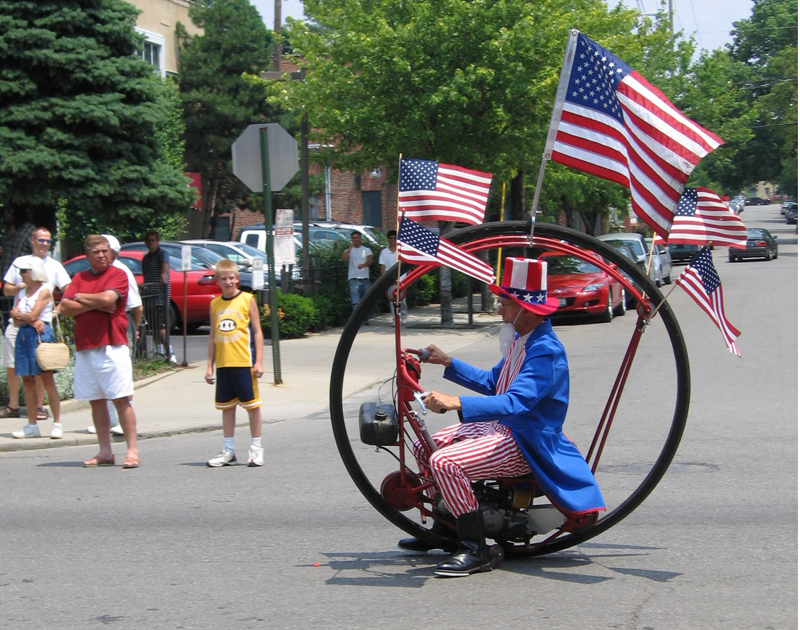 The theme feels rather simplistic for a Wednesday. I would’ve liked to see more interesting types of head coverings here. The fill has a lot of good things going for it, but a lot of bad things as well. 3.1 stars. 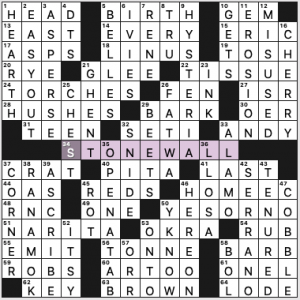 The first Wednesday in Pride Month brings us this homage to the STONEWALL (34a. [Historic inn commemorated during Pride Month, as suggested by this puzzle’s border answers]) Riots, where all the “walls” of the puzzle are filled with ___stones. All the edge entries’ clues are marked with a star so you know something’s up. 1a. [*Graveyard sight] is a HEADstone rather than just a HEAD, for example. The perimeter is filled with a BIRTHstone, GEMstone, CHERRY stone (that reminds me—I need to snack on some cherries and then add cherries to my grocery list!), COBBLEstone, LODEstone, BROWNstone, KEYstone, CORNERstone, and the mystery item, 1d. [*Online card game with over 100 million players], HEARTHstone. Never heard of the game, and before I caught on to the theme, I’d filled in HEARTS here.

With so few entries not intersecting one themer or another, you expect to see some tradeoffs, like that BOL./ONE-L crossing and the CRAT/OAS/RNC heap, but overall the fill was okay. An EASY OUT and SERRANO pepper brought a little flavor.

3.9 stars from me. I’m hoping to see more Pride-savvy themes in the NYT this month—you’d need four of ’em to crack 1% of the year’s NYT puzzles, which is a teeny amount. 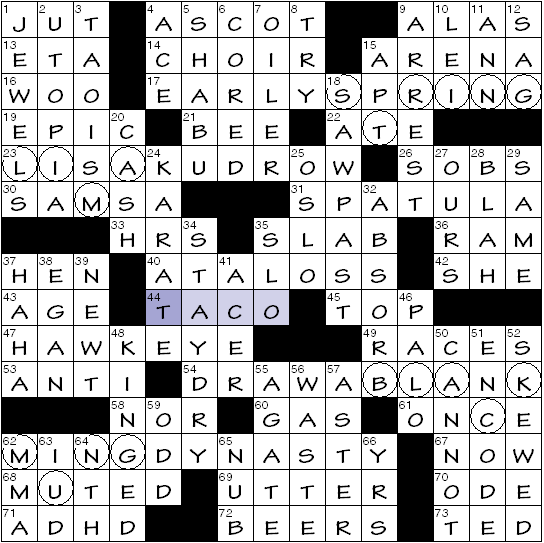 The theme entries contain—with one internal letter off—the name of a type of bean. The correct letter that completes the name appears in the next entry below, in its proper position, so that by ‘dipping’ your eye as you read, it all works. They’re circled, for convenience. (12d [Droop] SAG)

Further, each bean word is a full word in itself: no partials or spanners. Consistency. Slightly more, uh, elevated than your typical daily theme.

Entries relating to the overarching monthlong theme: 4a [Asexual, for short] ACE; 19a [Poem such as “Gilgamesh”] EPIC; 30a [Kafka’s Gregor] SAMSA (according to some interpretations); 11d [Author __ M. Martin] ANN; 59d [Drag queen Vander von __ ] ODD—I’m not seeing the pun here, isn’t there usually a pun? 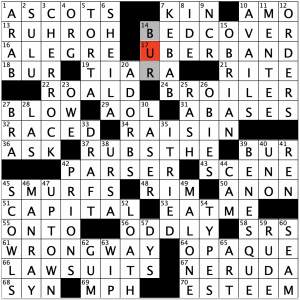 This week’s AVCX is a guest puzzle from Sara Cantor that had some nice AHA moments as I tried to figure out what was going on with it.  First, our revealer for the theme:

There are three clues in the grid that are a little wacky, each with BUR (RUB, the wrong way) somewhere nearby (18A, 39A, 14D):

Taking each nearby RUB and integrating it into these answers, you get the much more standard RUBBER BAND, CHERUB ROCK, and RUBENESQUE.  Spotting RUBENESQUE was easy, but figuring out how the other RUBs contorted to make proper entries was a little tricky. 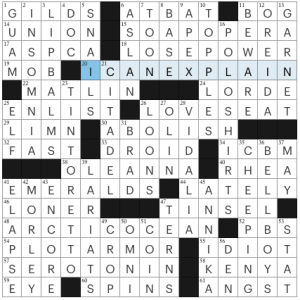 I don’t feel like I’ve been seeing PLOT ARMOR in the real world at all, but this is the third crossword this year that’s included it (the first was a Boswords Spring Themeless League puzzle, if memory serves). The [Main character’s protection against being killed off, facetiously] clue is now a gimme for me. And if you think of all the protagonists who engage in protracted gun battles and never sustain a grievous injury (we’re looking at you, Bond) because somehow the ultra-villains are all terrible shots—that’s PLOT ARMOR, innit?

Overall, smooth puzzle. Fave fill includes LOSE POWER, “I CAN EXPLAIN,” ARCTIC OCEAN, SEROTONIN and INSOMNIA, and the pretty word CITADEL, much prettier than its meaning.

til (“today I learned”) that TINTORETTO is that [Sixteenth-century Venetian painter whose name literally means “little dyer”]. 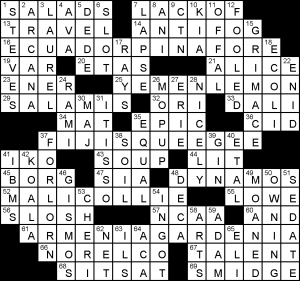 This puzzle’s theme felt unusually simple: names of countries plus words that are feminine rhymes of that country. There are five countries, with the puzzle one square wider to accommodate FIJISQUEEGEE in the middle. MALICOLLIE also sticks out as the two words have a very different vowel sound.

I hope everyone knew NORELCO, because guessing ILS could be dicey…