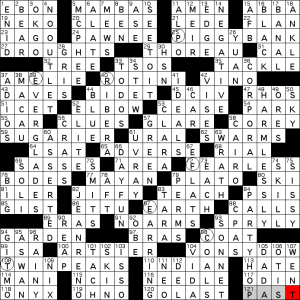 hello and welcome to episode #678 of matt gaffney’s weekly crossword contest, “Ad Campaign”. for this week 4 puzzle, the instructions tell us that we are looking for an eight-letter word whose last letter is A. okay. what are the theme answers? there are none expressly indicated as such in this overlarge (21×21) grid, but there are seven cross-referenced pairs of clues, which is an unexpectedly large number:

identifying these as the theme answers was clearly the first step. i was definitely looking for an eighth pair, based on the instructions, but there kept not being an eighth pair, so i shrugged and moved on.

what’s next? each of the pairs of linked answers are either both acrosses or both downs. and the wording of the cross-reference is curious—across and down are abbreviated as just “A” and “D” in these clues, whereas the second halves are clued as {See 80-Across} and the like, with the word “across” spelled out. so that’s a hint, and in fact, looking at that hint and the first pair (PAWNEE INDIAN) very quickly got me to PAWNEE INDIANA, the fictional town where parks and recreation was set. (indeed, i suspect for most people, this is the more familiar context in which they might associate the term PAWNEE.) likewise, ELBOW PASTA and SKI PARKA are real phrases.

not only that, those phrases can satisfy other clues in the puzzle:

so those are surely important. i kept trying to do the same thing with the downs, but BLACK BEARA isn’t a thing. however, it didn’t take me long to realize that with the downs, i needed to be adding a D rather than an A. these similarly produced real phrases: BLACK BEARD, GREEN CARD, BIG BEND, and RAINY DAY FUND. matching these up with other clues in the grid revealed:

all that’s left to do is identify these seven extra entries in the grid and circle their first letters (as in the screenshot above). from top to bottom in the grid, they spell out PERFECT. as there are, in fact, only seven of them, we must have to add one final A to get PERFECTA as the meta answer. i can’t decide if that last step is elegant (because it repeats the theme mechanism and balances out the three A’s and four D’s) or inelegant (because it’s more than a little arbitrary, and would not have been a natural thing to do without the instructions being worded exactly as they were). it did make the meta slightly longer, if not really any harder. i suppose it’s possible to arrive at PERFECT, not know that PERFECTA is a word, and thereby be stuck an inch from the finish line—but that would be quite a parlay. still, i think i would have very slightly preferred the same puzzle with instructions “the meta answer is a 7-letter word.” better yet, it would have been cool if the final step had turned ADDEND into ADDENDA, since “ADD END A” is exactly what that final step would be.

i found this meta to be extremely tractable for a week 4. every step seemed pretty straightforward, and the only time-consuming part was combing through the 21×21 grid for the entries whose clues would fit the modified theme answers. it’s definitely a cool mechanism, and there were some neat wordplay finds underpinning it, like BIG BEN(D) and ELBOW PAST(A).

the title is very clever in retrospect, with “ad” hinting at both A/D and homophonically at “add”, both of the relevant features of the mechanism. one thing i noticed during the solve was that the central across answer was {Unfavorable} ADVERSE, which made me almost wonder if it was intended as another nudge.