I figured out what was going on with the first theme answer, and the revealer made me smile. Each theme answer has a rebus square with the name of a sweet treat. The rebi are not entirely symmetrical, which made it a bit more challenging. Peter’s grid is easier to read than mine. 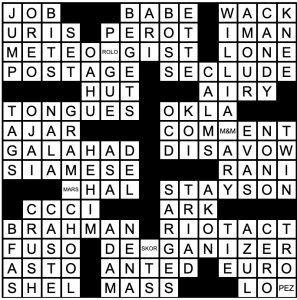 And the revealer: 10d [With 46d, popular phone game….and a hint to this puzzle’s theme] is CANDY CRUSH.

My husband has just presented me with a cocktail (Captain’s Blood), so I’ll skip to “what I didn’t know before I did this puzzle: that the Spy can capture the MARSHAL in Stratego.

I didn’t catch on to the theme until the last revealer. Thus, I was befuddled for most of the way until I finally got the aha. I blame the fact that I’m physically worn out from wrangling what felt like a one TON stone into position at the top of a rise for a waterfall/pond feature I’m installing in the garden. How appropriate for this puzzle since each entry ends in a TON which is “lifted” up in the vertical direction. 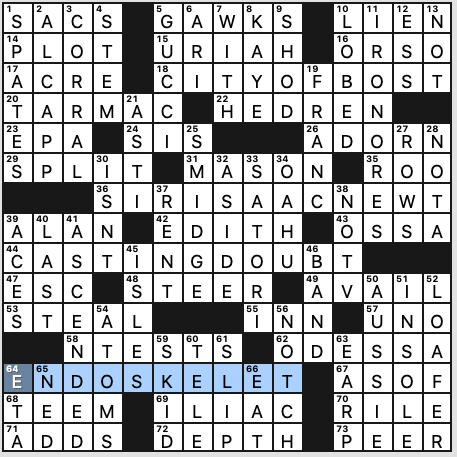 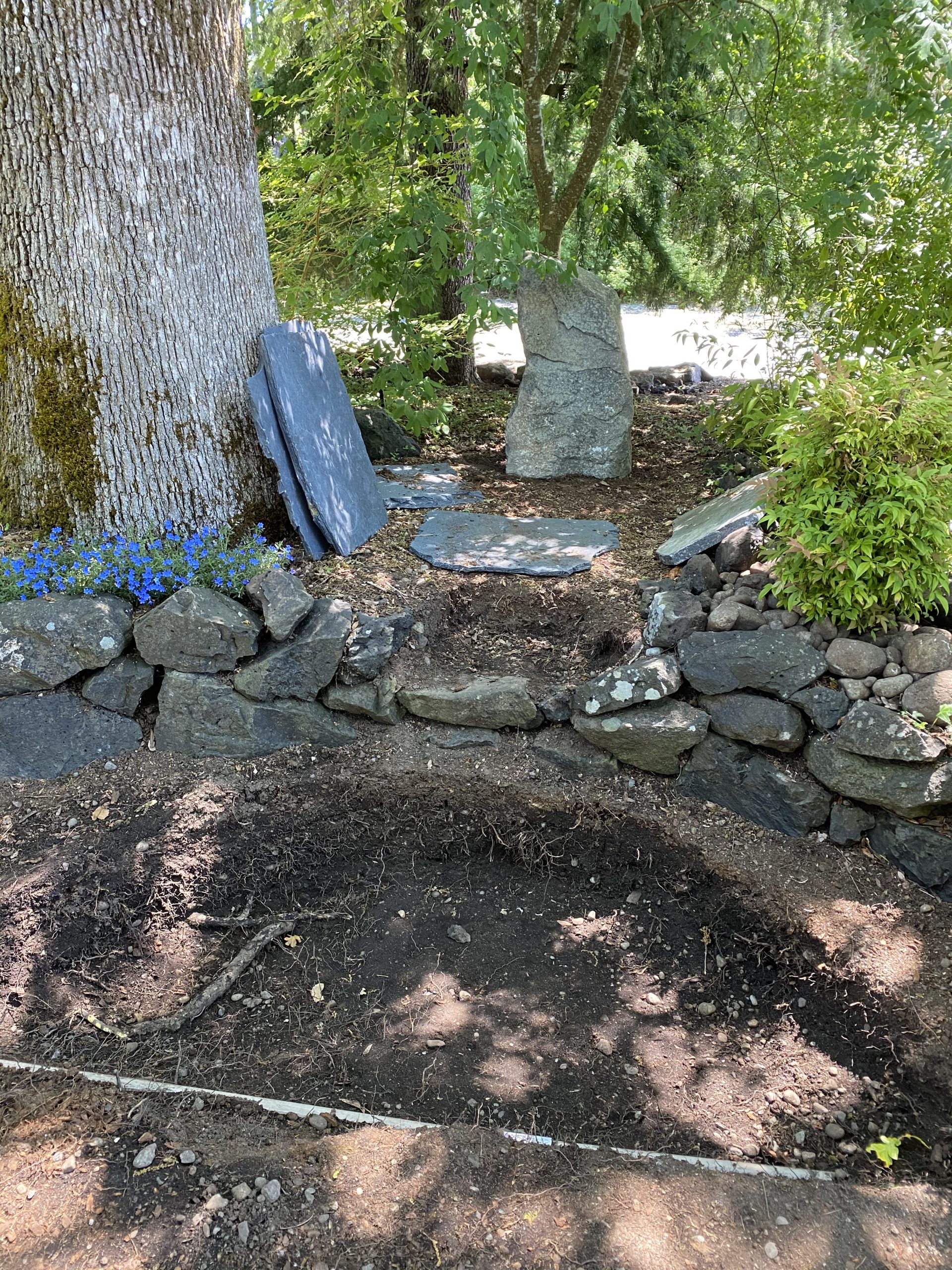 The not-quite-one-TON stone I was wrestling with is in the middle of this picture. I lifted it into position then came inside for a break and a puzzle. (The stone has a vertical hole running up inside it and will be a bubbling fountain feeding into a little stream leading to a waterfall and pond below.)

I enjoyed finally sussing out the answer and then realizing the coincidence with what I was physically doing a half hour before the solve. I just had to smile.

Unfortunately, there’s not a whole lot to smile about in the fill. The long marquee answers are workmanlike (IRON ORES, ASCENDED), and there just seemed to be a lot of fusty entries in the grid (Biblical URIAH, Tippi HEDREN, Danny KAYE, EDITH Head, Mt. OSSA (crossing “NOTA bene”), NO TV, N-TESTS, ODESSA, ILIAC. Meh.

One thing I didn’t know that I was glad to learn was SATORI [Sudden enlightenment]. Wikipedia says, “Satori means the experience of awakening (“enlightenment”) or apprehension of the true nature of reality. It is often considered an experience which cannot be expressed in words.” Maybe we can change “aha moment” to “SATORI moment.”

Nice theme, especially for me. Not much in the fill to get excited about though. 3.4 stars. 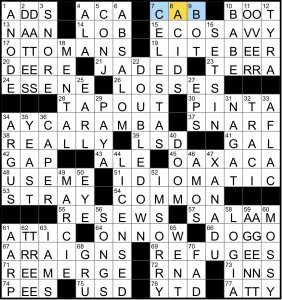 I had an AHA moment on today’s puzzle that was so loud my roommate poked their head out into the living room to ask what was up.  I had noticed there were a bunch of places in the across clues where double letters were being placed in one square, but then I realized they were all converging in the same down squares:

Each of the answers can be preceeded by the word “double” to make sense with the clue — DOUBLE DATES, DOUBLE OVER, DOUBLE AGENT, and DOUBLETREE.  It was such a nice lightbulb moment.

Of the various across words affected by this theme, I particularly like ECOSAVVY, ESSENE, DOGGO, and REEMERGE, all of which helped me realize what was going on under the hood here.

This appears to be a debut puzzle for Abigail Doctor. Congratulations! 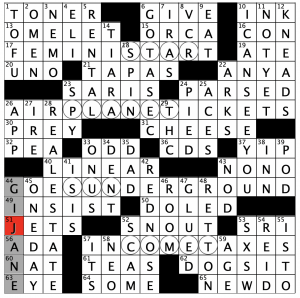 I’ll get my usual gripe about Universal puzzles like this out of the way first: I find it extremely bizarre that the publication is okay with asking solvers to count and mentally circle letters in their widely available publications (in print syndication and on its web applet) rather than updating the program being used to publish their crosswords so it can handle circles. The fact that their puzzles are available on this site with circles through Across Lite seems to be an acknowledgment that the one given to the masses is subpar by comparison.

Nice finds in this hidden word theme. Strong base phrases (though I suppose no one really says AIRPLANE TICKETS, it’s a thing(s). And it’s better than AIRPLANE TOILETS to hide the word PLANET :), the hidden words bridge the phrases, and the words themselves are all strongly related. So it hits all the hidden-word marks.

Enjoyed the fill- GOT A SEC? and I CAN SEE YOU! in particular. I saw G.I. JANE a long time ago when I was in high school. Don’t remember much about it. But boy, that flick has legs in Crossworld.

I was unaware of the spelling “womxn” (in the clue for FEMINIST ART). There’s an interesting article on it here, which now after reading it, I do recall learning of it. It just didn’t sink in well enough the first time. Now it’ll stay there.

Fun fact in 57A! No state income taxes in Alaska or Nevada?!

Anyone else notice COMET shooting right through Rudolph’s RED NOSE? Take that, Rudolph!

Brendan Emmett Quigley crossword (No. 1371), “Keep Your Eye on the Ball” — Jenni’s review

All the theme answers contain the word BALL. 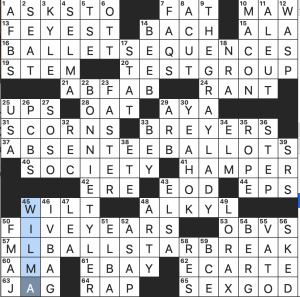 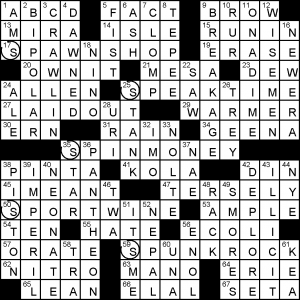 The theme is very basic and nearly infinitely repeatable: add an “S” to the start of the first word and create a “wacky” phrase. So: (S)PAWNSHOP, (S)PEAKTIME, (S)PINMONEY, (S)PORTWINE & (S)PUNKROCK.

The rest of the puzzle played more like an early week. Odd to include BIPOLAR and then clue it as [like Earth]. Is the other meaning considered overwhelmingly negative then?