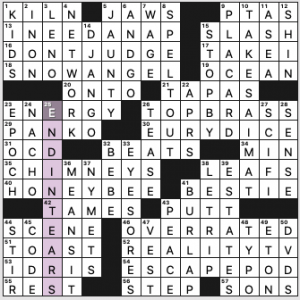 Aaah, so many great entries here! I’m partial to “DON’T JUDGE,” a HONEYBEE, REALITY TV, ESCAPE POD (I need one, please), END IN TEARS, and DJANGO.

I’m procrastinating on writing here, so let me just bulletize: 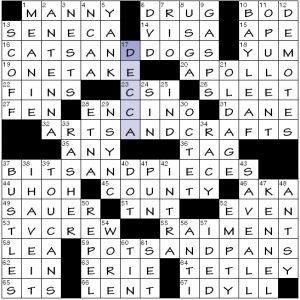 This is sort of a recombinant theme. The clues consist of two two-word phrases; for each phrase there is a word that can be paired with both elements, and those two new words—pluralized—are linked in a common phrase containing the word ‘and’. As is often the case it’s more difficult to explain than demonstrate:

Whew! That’s quite a theme in both concept and execution.

Theme: Using the title as a hint, we see that the bigram BI (meaning “two”) appears twice in each theme answer. If it was me though, I would’ve gone with the title “Two By Two” just for the play on words. 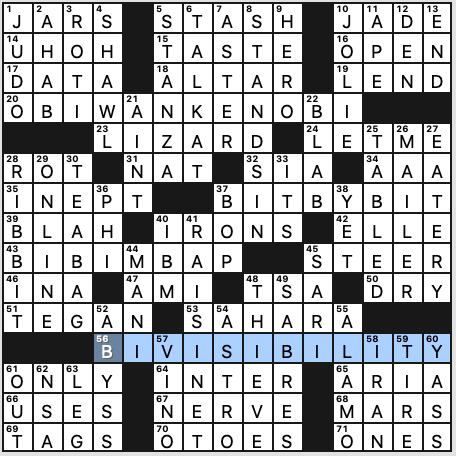 I for one was not aware of this day, but I’m glad to learn it. In that respect, this puzzle does its job of raising awareness. According to Wikipedia, the date was chosen partly because it’s the birthday of one of the organizers, but partly because September is the birth month of Freddie Mercury.

As for the theme itself, I wasn’t sure how the term BI VISIBILITY meant there should be two instances of BI in each themer, but once I made the connection with the title, I was on board. It works well enough for me.

In the fill, my fave entry has to be RIBBIT. I also like RAISINET. Well, I don’t like Raisinets; I’m definitely more of a Goobers guy. But as fill, it’s fun. 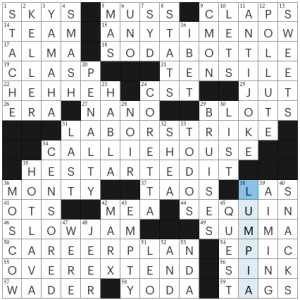 Although the Friday New Yorkers are supposed to be the easiest, this one felt a tad tougher than I was expecting. Not any harder than the typical Fri NYT, though.

First off: LUMPIA! These deep-fried [Filipino spring rolls] typically contain pork, so I don’t eat them at restaurants. Friend of mine makes his own banana lumpia, though, and I would go for that but I don’t want to deep-fry at home. (There is so little Pinoy stuff in crosswords. Of course it’s Erik who brings this bit of representation, because he’s so intentional about such things.)

Did not know: 34a. [Leader of the National Ex-Slave Mutual Relief, Bounty, and Pension Association, chartered in 1897], CALLIE HOUSE. Just read a bit about her here. She was campaigning for reparations over a century ago. Do you think she would be surprised that in 2021, the concept was finally finding some hints of approval from the white majority, but that little had actually come of it?

Feel like the clue for 34d CENSORED has it backwards. [Like the line “I have had it with these monkey-fighting snakes on this Monday-to-Friday plane!”] says that this non-sweary alternative to profane movie dialogue (with Samuel L. Jackson’s delivery, “motherfucking” is golden) is what’s CENSORED, but I would say that the original profane dialogue is what was censored. Yes? No?

New to me: 11d. [Its punchline is designed not to land], ANTI-JOKE. Apparently these are things where the expected punchline is abandoned and instead you get a logical answer. Here’s a list of anti-jokes.