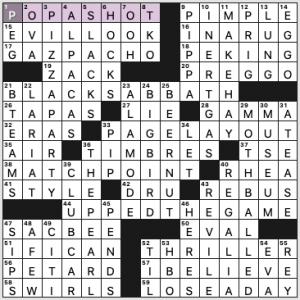 Yeah, okay, this one might be clued too easy. It’s got a pervasive sports vibe and I still finished it in a Fridayish time? I sure don’t know the arcade game name POP A SHOT (seen it plenty, didn’t know what it was called). ERAS is clued as the baseball stat, MATCH POINT crossing LET brings the tennis content, UPPED THE GAME presumably originated in sports, and there’s also TKO and B-TEAMS.

Fave unsports fill: GAZPACHO, BLACK SABBATH, PAGE LAYOUT, PIZZA PARTY, BIG BIRD, the double scoop of A LA MODE and SWIRL, MOTHBALLED, and Steinbeck’s THE PEARL, which I read for English class maybe around 8th or 9th grade. I remembered nothing of it and just read the plot summary at Wikipedia, and boy oh boy, is that dark.

Four stars from me. On to the weekend!

Well this was unexpected! 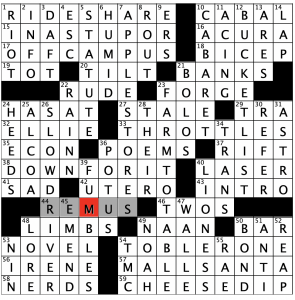 Lots to choose from here….

Were it not for the NW I might’ve broken my record for a 15x. I flew threw everything but really got hung up in that whole section, spending an equal amount of time there as on the rest of the puzzle. I forgot the spelling for RAINN Wilson (crossing a cast mate, ELLIE Kempter!) Had something like UBER RIDES for 1-Across. It was ugly. Confidence in APPLE STORES (bit of an odd plural) and ESC helped unsnarl the whole mess, but it was like the highway was suddenly full of speed bumps and I was a SLOW DRIVER.

Is this Universal’s first themeless? I’m thinking it is. I mix it up with Puzzle Society crosswords, which did publish themeless puzzles if I remember correctly. Does the title suggest that perhaps we’ll see more? I hope so! 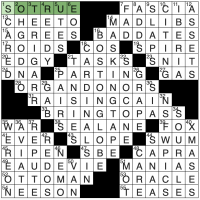 My buddy Jeff Chen has this week’s LAT themeless challenger, and look at that wide-open center! Very nicely done! There is an entry or two that I need to check and make sure they are in my word list! I am going to try my hand at themeless puzzles one of these days; it will take a while to make some this good. Lots of fun stuff in here, and nothing too obscure, as usual for the LAT. One of these days I will see Jeff in person again! 4.7 stars from me.

That’s all for now. Off to do more puzzles! And hopefully enjoy some of the warm weather! 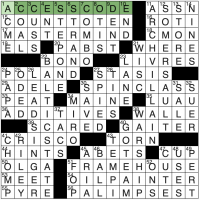 I will be honest: I LOVE Stella’s themeless puzzles! So it is always a serendipitous joy when I see her byline on a weekend puzzle! This one is no exception. Not quite as tough as the fare on her site, but still a challenge. Got this one done in less than ten minutes, but that is likely because compared to the puzzles on her site, this one is a piece of cake! Hope you enjoyed this as much as I did: 4.7 stars from me. 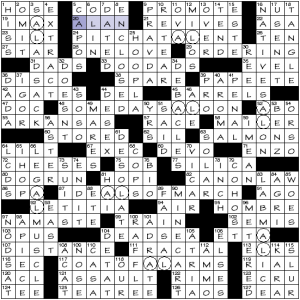 Title for this one is intended to be parsed as “AL add-in”, for that bigram is introduced to phrases with the intent of causing mischief. I’ve circled the letters in the solution grid for clarity.

Not the most inspired theme, but it certainly gets the job done.

Okay. No David Bowie, and no Paul Simon (though I’m tempted). So I’ll honor my favorite of the theme entries with what it sort of reminded me of: