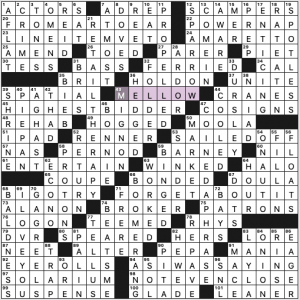 Ah! An oversized themeless can feel like a slog, but in Robyn’s capable hands, there’s enough spiffy fill and fun clues to keep me happy. Those two pageant sashes full of 6-letter entries are smooth as hell, though held together with the help of a lot of past tense -EDs. Those two corners with criss-crossing 8-letter trios are gorgeous, too.

Fave fill: grinning FROM EAR TO EAR, COSIGNS (though I prefer the contemporary social-media vibe of using cosign as shorthand for “I agree/I endorse this opinion”), HIGHEST BIDDER (without going over! Wait, that’s only on The Price Is Right), EYE-ROLLS, “AS I WAS SAYING,” NOT EVEN CLOSE, RETAIL THERAPY, BOOMERANG, COINED A PHRASE, and the dreaded DURSLEY name. 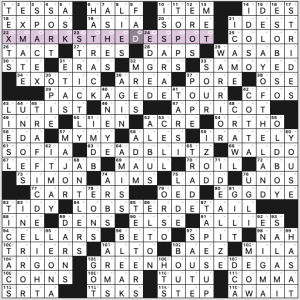 Good morning! The sun is shining, the birds are chirping or cooing or squawking according to their nature, and I have a cup of lovely French-press coffee here on my porch. Life is good and so is this puzzle.

Each theme answer has DE added as a prefix to one word in a familiar phrase.

All the base phrases are solid, all the theme answers are amusing, and I like the variety with some DEs added to the first word and some to the last. I don’t know why it pleases me when there are theme answers going both across and down, but it does!

What I didn’t know before I did this puzzle: that LEONA Lewis recorded a song called “Run.” That’s not the one I’ve leaving you with.

This puzzle was definitely tested before it was published. 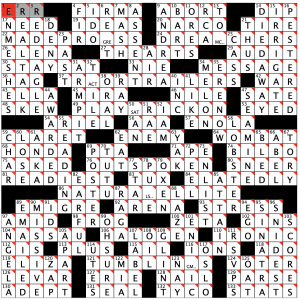 Well, I’m about as knowledgable about different abbreviations for standardized tests as I am about all the different types of degrees one can earn (which reminds me of this fantastic puzzle). That is to say tests are not in my wheelhouse, no matter how often I’ve come across them in crosswords.

It did, however, make for a fun puzzling experience. Unlike many rebus puzzles, with this one you didn’t quite know the number or order of the letters being confined to one box, so it took more puzzling out. For me, I uncovered SCORES about mid-solve, and it was very helpful in at least determining where the rebus square might be on entries that gave me difficulty like NATURAL SATELLITE and TUMBLING MATS. Plus, I mean, the added Birnholzian layer (in this case, SCORES being spelled out like that) is always pretty danged cool.

Theme: Words that can take the prefix COM- are paired with the prefixed version of that word resulting in crossword wackiness. 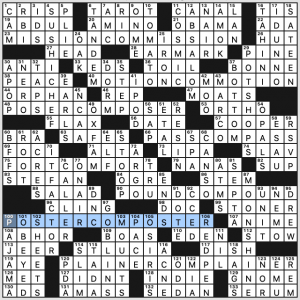 These work best when the pronunciation doesn’t undergo a change as it does in the two middle entries (PASS and FORT). I also generally preferred the entries where the first word is two-syllables long, since they sound more lyrical. Reading the entries as a list, you get into a flow until PASS COMPASS interrupts that flow. I’d enjoy it more if those two middle entries were replaced with a single entry (PADRE COMPADRE, perhaps?). Of course, then POUND COMPOUND would stick out as different.

As it is though, there’s a lot of repetition in this theme, which I didn’t necessarily find as a bad thing. It definitely helped in getting me to plop in entries left and right in speedy fashion. There’s little chance of your 21x grid turning into a slog when the solver can plug in theme entries relatively quickly.

The rest of the grid is very nicely filled with a load of sparkly entries: SUSHI CHEF, MOONSHINE, POT SHOPS (and a STONER to boot), IT FACTOR, GOBLINS, ST LUCIA, ABSALOM, EARMARK, COSMIC, TAHINI. Nice job on the fill!

The repetition in the theme made this a quick solve, and that’s not a bad thing. The fill makes the grid sparkle. 3.8 stars. 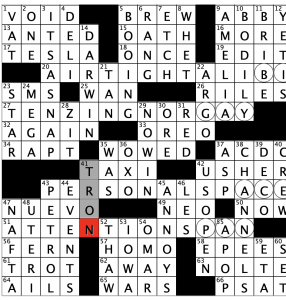 THEME: Sexual identities are at the ends of common names/phrases

I’ll keep my gripe about circled letter themes in the Universal minimal today. Just still feel the need to mention that it’s odd that Universal publishes two different versions of the same puzzle: One with circles available on this site only, and one for the masses that doesn’t feature circles. This one doesn’t suffer that much from the discrepancy. Time for an update to the software, Universal!

Fun theme. I skipped the title today and was wondering what the revealer was… then AHA! Clever!

TENZING NORGAY. Needed every (fair) cross, and still wasn’t sure where the fist name ended and the last name started. Also, if climbing Everest is one your bucket list, please reconsider.

Thanks for this one! Nice finds.