This is Erika’s NYT debut. In the constructor’s notes on Wordplay, she says it came on her 40th birthday – I’m not sure if that was 6/6 when the puzzle dropped or 6/7 on the official pub date, but either way, happy birthday! Thanks for giving us a present. I didn’t know what the theme answers had in common until I got to the revealer. 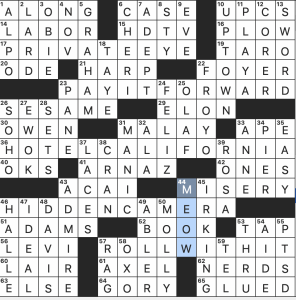 And the revealer at 57a [Be willing to accept whatever…or a hint to the ends of 17-, 23-, 26-, and 16-Across]: ROLL WITH IT. EYE ROLL, FORWARD ROLL, CALIFORNIA ROLL, CAMERA ROLL. Everything is solidly in the language and the theme is consistent. A very nice debut! I look forward to seeing more from Erika (especially if she uses her punning expertise in her themes).

The puzzle gave me an earworm and it may not be the one you expect. 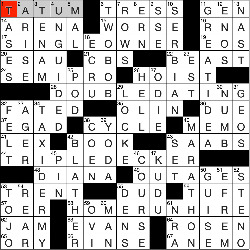 It’s June, so it must be time for a baseball puzzle, right? As 38A [With “the,” rare batting feat whose components begin the answers to starred clues], CYCLE, tells us, this puzzle is about the four hits that are part of “the cycle” if they’re hit by the same person in the same game: SINGLE, DOUBLE, TRIPLE, HOME RUN.

Overall: Not my favorite. Baseball themes have been done enough times that it’s hard to find a fresh take.

Theme: UPLIFTS (25d, [Elates, and a hint to this puzzle’s theme]. The other theme answers (in the Down direction) are comprised of phrases that hide the word LIFT when parsed from the bottom up. 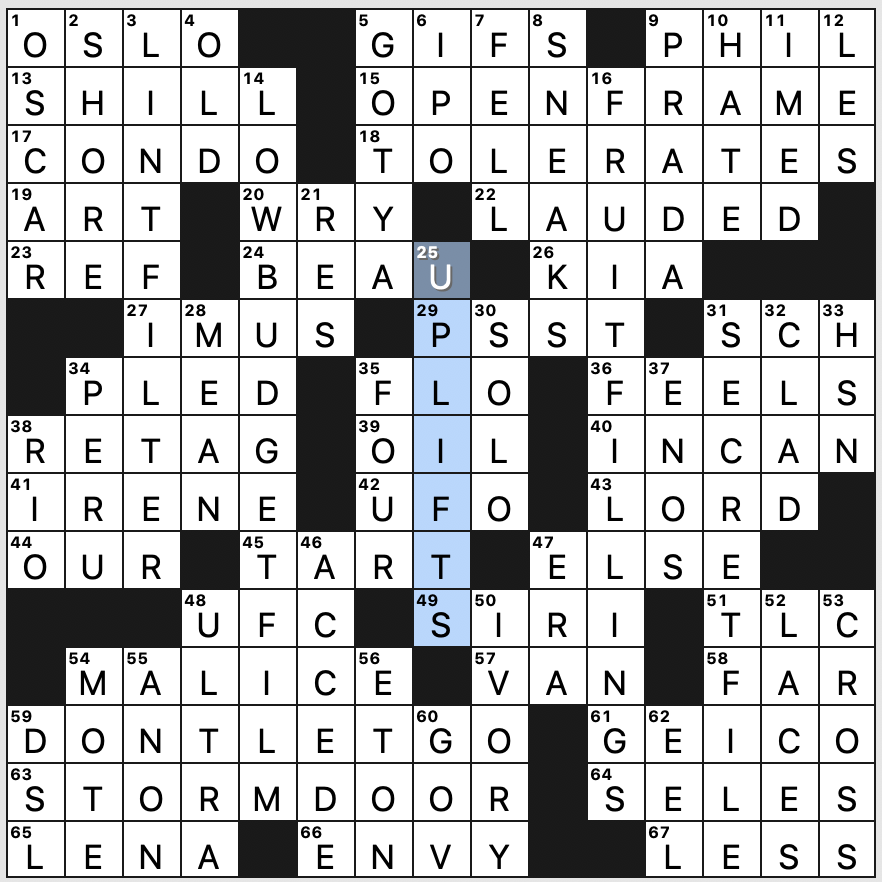 Meh. I know it’s Monday, so this is probably good for the newer solver, but having the same hidden word in each entry is a lot less interesting than when the words are all different.

Further, the fill feels rather staid as opposed to the typical Burnkel grid, starting with “GOT YA!” [“Oh, now I see”] which most people would write as “gotcha!” Elsewhere, there’s IMED, IMUS, ANON, INCAN, and DSL. In the long fill, STORM DOOR is nice and “DON’T LET GO!” is fantastic, but for me, those don’t make up for the minuses. Maybe it’s not fair, but I’ve come to expect a lot of sparkle when I start a Burnikel puzzle.

Being Monday, clues were on the straightforward side throughout. I did like the KIA clue [Seller of Souls, Sorentos and Sedonas] which makes you think something devilish is going on at first.

Not my favorite puzzle from ZB, but maybe it’s good for the new solvers. 3.3 stars.

Ari Halpern’s Universal crossword, “Rise for the Cause” — pannonica’s write-up 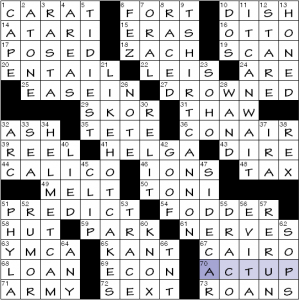 Explicitly naming the clues and asterisking them? That’s like wearing suspenders and a belt, or [insert STD prophylactic reference here]

The ACTs rise by 2 rows, 3 rows, 4 rows, and 4 rows again, but the slope looks different than that sounds because of the column spacing. 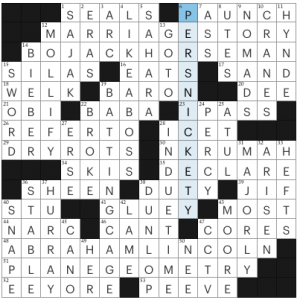 Natan’s stair-step corners allow him to anchor the grid with 13s and 14s, and these long entries are all terrific: the MARRIAGE STORY movie, the animated series BOJACK HORSEMAN, ABRAHAM LINCOLN as a literary character in Lincoln in the Bardo, and PLANE GEOMETRY citing Euclid’s Elements. I like that common thread through these four, all referring to things that were written. That written vibe continues through George Eliot’s SILAS, a Lawrence WELK bio, songwriter/actor ICE-T, Milne’s EEYORE, songwriter/rocker Chrissie HYNDE, singer/songwriter Justin BIEBER, Walker PERCY, doctor/writer ATUL Gawande, poet Marianne MOORE (here’s “Poetry”), Latin CANO from The Aeneid, the film HER. Now, you know me, I enjoy puzzles packed with names because I tend to know the references. There will be dissenters who shriek that this crossword is a “trivia quiz” if they happen to not know the names and titles.

Other fill I liked: LIKE A BOSS, BATTING CAGE, and these lively bits of vocabulary, PAUNCH, PEEVE, MOLLIFY, and PERSNICKETY. Are those last four not great words? Love ’em.

Harder than usual! Just me? 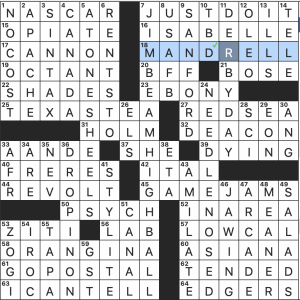 There were some things I just didn’t know and some I found difficult to figure out, and when two of those crossed, I struggled. I’m not sure JIM BEAM HIGHBALL is a thing. I’d be willing to do the research and report back. Here’s the grid. I was on call last weekend and I’m signing off.

What I didn’t know before I did this puzzle: never heard of GAME JAMS.