Title: “Triple Switching Hour”
Prompt: The meta for this puzzle is a rock band.
Answer: The Replacements 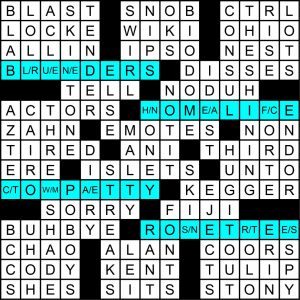 So many rabbit holes traveled down before finally regrouping, taking a deep breath, and finding the answer fairly quickly thereafter.

We have four theme entries, identifiable by their mysterious parentheticals:

OK, so the first thing I looked at with “Triple” in the title was the three-letter entries, of which there are only five. A highly suggestive number, since it’s both very low for a 15×15 grid and exactly one more than our four theme entries. Surely the answer lies through performing some mechanism four times on each of the theme entries using one of the three-letter words, and then the meta answer is derived from performing that same mechanism using the last remaining three-letter word on a famous rock band.

But no, those five three-letter entries turned out to be completely irrelevant. What!?

Next, in some order:

Did you know that Chad Hugo is half of a hip-hop producing duo (along with Pharrell Williams, whose name has three sets of double letters, which also cost me 90 seconds) from Virginia, and that CHAO is in the grid, one letter off from CHAD, and HUG IT OUT is an answer, which contains HUGO? Did you know that Nine Inch Nails is an alternative rock band from Ohio, and that NIN is found in the THE SHINING at 11-Down and that NON is one of the puzzle’s five three-letter entries? Did you know that the Isley Brothers are a famous R&B trio (originally a trio, at least) and that ISLETS is in the grid?

And on and on like this, finding patterns in the noise…OK, so time to do the old take-a-deep-breath-put-the-puzzle-down-and-when-you-come-back-you’ll-see-it-right-away trick…

And it worked. Took a half-hour break, came back, said: “Wait a second — why is he using these specific entries here?” I’d done everything except…you know, look at the theme entries. Once I did, TOM PETTY emerged from COW PATTY with three letters changed. He fits the parenthetical “famous rocker” and is, as the title suggests, a “triple switch” away from the original entry.

The others work the same way. All four in grid order are, with changed letters in bold:

I admit I had to look the RONETTES up. Of course I know who they are but changing three letters in an eight-letter word with all common letters leaves a ton of possibilities.

Anyway, so those replacement letters spell…RE-ENACTMENTS? Is that a band? I Googled it and came up empty. Weird, since I thought I was going to be getting the REPLACEMENTS as the answer since 75% of that works from the theme entries and it would be spot-on perfect as a meta answer.

Was puzzled for a while, but then I thought: let’s do the theme trick one more time. Pretend that RE-ENACTMENTS is a theme entry, replace three letters and get…meta answer the REPLACEMENTS. Lovely.

So simple in retrospect, but so hard to see, and the final twist of having to perform the meta trick one last time was an amusing final hurdle.

Novel meta idea, marvelous execution (can’t have been easy to make this work — would love to know the construction time), and that funny and fitting final touch.

What more do you want from a meta? 4.90 stars. Bravo to the constructor.