This week we’re told, The answer to this week’s contest crossword is a two-word phrase. Sometimes the meta gods smile upon you, and you lock into the meta frequency almost immediately. Sometimes the opposite happens, and you spend days exploring dead rabbit holes. Fortunately: the gods were kind to me this week.

There are four long symmetric themers:

“Pardon My French” is the obvious alternative to the title, so I began looking for a French Connection. When it comes to parsing or speaking French: my hovercraft is full of eels. That, plus the parenthetically-numbered clues gave me pause. But fortunately for me: C’est simple comme bonjour !

11d (BLINDALLEY) stood out to me: I wondered if Matt was using the classic meta mechanism of writing clues that could be applied elsewhere. Despite struggling to pass junior high school French: I happened to remember a bit of French trivia: cul de sac literally means “bottom of the bag” (not relevant here), and also happens to be another definition of a “road with no outlet” (very relevant here). I spotted DEATHBLOW next, leading to coup de grace. PSEUDONYM fell next (nom de plume). MASTERWORK was tougher for me, so I Googled “masterwork in French“. That lead to chef d’oeuvre, which…. kind of matches the other three themers (which had a “this de that” pattern), but not exactly.

It’s one thing to find alternate answers that fit meta clues; I needed to find the mechanism that locked them in (and would hopefully lead to the answer). I noted some odd fill as I completed the grid, and spotted 19a (GRICE). That seemed to point to Coup de GRACE (swapping the “I” for GRACE’s “A”), I quickly saw 68a (CORP, swapping an “R” with COUP’s “U”), and I was off to the races:

I couldn’t spot any grid entries that worked with chef d’oeuvre, so I was pretty sure I had that one wrong. I decided to see if I could solve 75% of the meta by applying the numbers, and it fell together quickly: DEATHBLOW/COUP de GRACE (2/6), used CORP’s “R” as the 2nd letter and GRICE’s “I” as the 6th: continuing that process for the three entries revealed ?RE?BIEN. 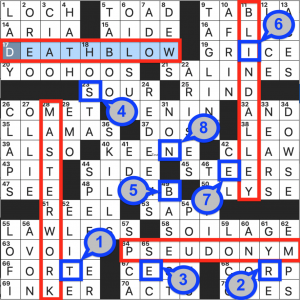 The answer was clearly “tres bien,” so I backsolved the rest by scanning for T’s and S’s in the grid that would work for MASTERWORK (4/1): I saw FORTE, leading me to TOUR de FORCE, with the matching grid entries (S)OUR/FOR(T)E. That supplied the missing fourth and first letter, locking in TRES BIEN, our meta solution.

Let me know if and how you made the French connection in the comments. In the meantime, here’s Sunday Girl by Blondie. This is the French-language version, sung by Debbie  Harry.