Note to commenters: Comments that are basically just complaining about the Universal crossword’s Pride Month series on sociopolitical grounds are subject to deletion. This site chooses to show love, not hostility, towards our LGBTQIA+ friends and family. 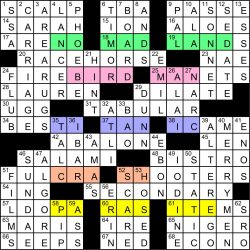 Hello everybody! First and foremost, hope you all are staying cool! It is hawt almost anywhere you turn in the US right now!

The 2021 Academy Awards are in our rearview mirror, but that does not mean you can’t create a grid that talks about Oscar winners of the past. In this grid, five separate FILMS are mentioned when filling in the circles, though each of its titles are “cut” by at least one black square and continue into the next entry to its right (51D: [Cinephile’s interests…and a hint to this puzzle’s theme]). Initially, I did think that each of the movies had its director win the Oscar because of the presence of “director’s” in the title. As a matter-of-fact, four of the five movies in the grid did have its director win the Academy Award for Best Director, as Crash is the odd man out…though it did win the award for Best Picture (2005). 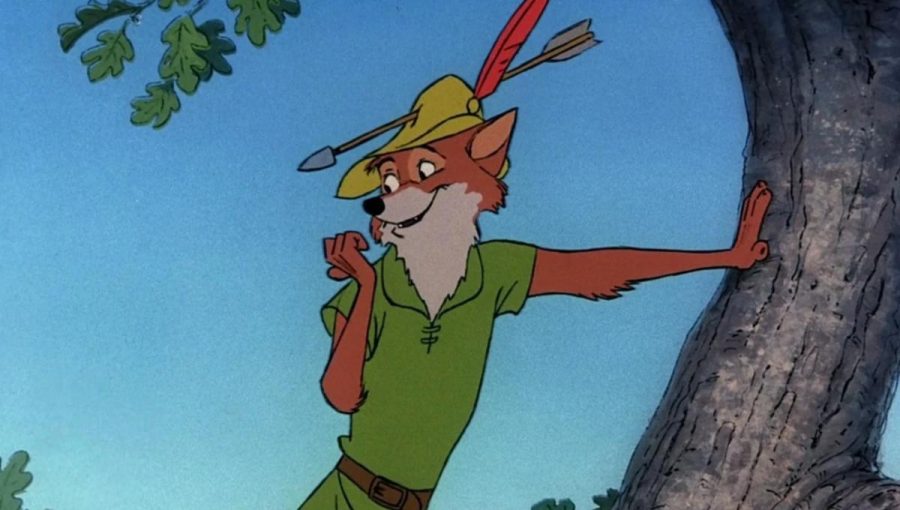 RACE HORSE seems pretty timely given the running of the Belmont Stakes this past Saturday, a race that the legend mentioned in the clue won by a staggering 31 lengths in 1973 (20A: [Secretariat, e.g.]). So wishing “utli” was a thing, then we could have had “tubular” instead of TABULAR and I can mention the couple of times I actually heard someone say “tubular” while out in California, confirming to me that that wasn’t just slang that I had heard in movies (31A: [Arranged in columns, as spreadsheet info]).

“Sports will make you smarter” moment of the day: LANCER (4D: [Mitsubishi sedan]) – Definitely dug deep to get this edition out to you, but if you wanted to clue this in the most impossible way, just do this: [Any athlete at California Baptist University]. The CBU Lancers made the move to the Division I level in 2018, and currently are a member of the Western Athletic Conference (WAC). The stupid transition period rule the NCAA has in its books will cause the school to not be eligible for postseason tournaments until 2022-23, but back in their Division II days, the CBU men’s basketball team did make the Elite Eight (the showcase of Division II’s NCAA Tournament, a la the Final Four in Division I) in the spring of 2018, their last season in Division II. The school is located in Riverside, California. (Now that I’ve written this, I went back to the grid and noticed that I could have easily written about current US Women’s National Soccer Team member and World Cup winner Crystal DUNN! Next time, for sure!) 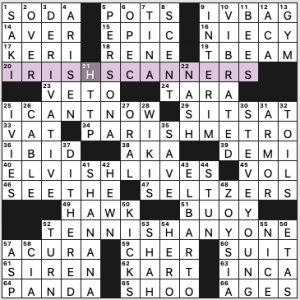 Our theme today adds an H to the end of -IS words to create new words that change the meaning of the familiar base phrases:

I didn’t pay attention to the theme during the solve, but this turned out to be a word ladder going from LEAD (the metal) to GOLD (hence the title). But unlike the typical word ladder found in crosswords in which the changed words are standalone entries, here they’re part of existing familiar phrases. 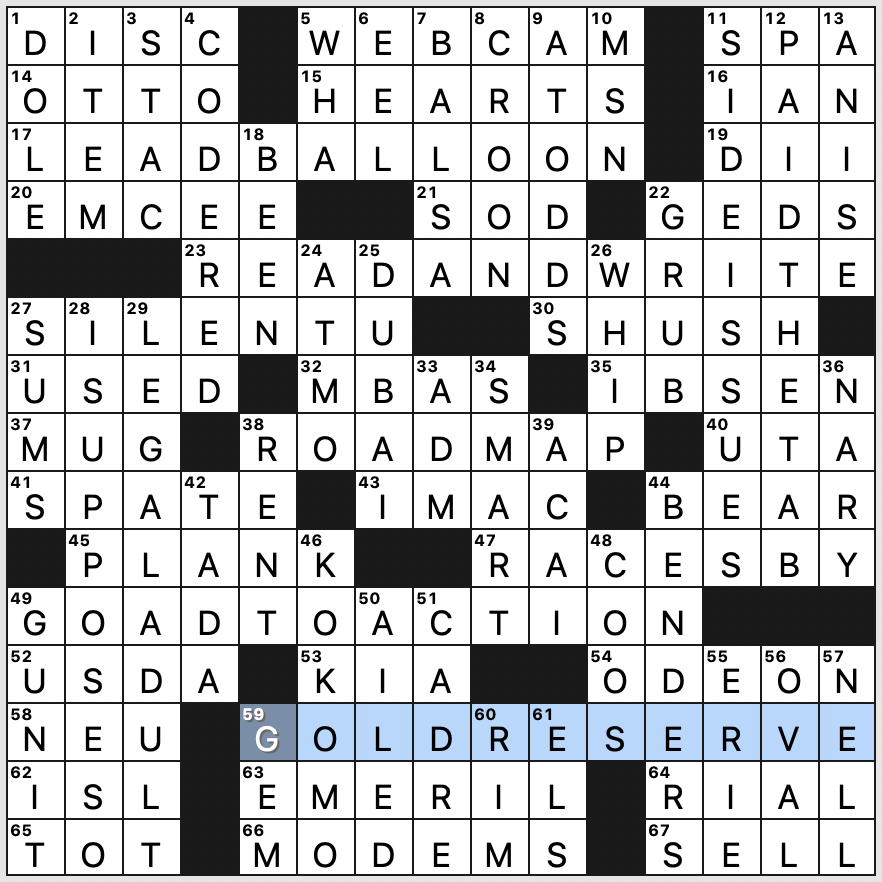 I for one don’t mind word ladders, especially when something interesting is done with them, and to me, this qualifies as interesting. Turning a LEAD BALLOON into the GOLD RESERVE is a fun idea.

Fill highlights: CODE RED, LEGAL ADULT, “I SUPPOSE SO,” PAID THE TAB (I wanted PAID IN FULL), and KOKOMO (watch the video here if you’re so inclined). A number of crosswordesey entries (DII, STAC, NEU, ISL, ATMO, etc.) threatened to scuttle the grid, but I think there were enough positives to outweigh the negatives.

A nicely themed grid. I wish the fill was a touch smoother, but there’s some good stuff to be found throughout. 3.75 stars. 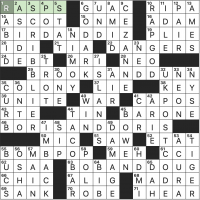 As is usually the case with Jonesin’ puzzles, I’ll bet the brainstorming session here was a hoot! All of the themers are pairs of people that have the initials B and D, hence the theme. How many more, if any, can YOU think of?

Perhaps a better question is: how many did you KNOW? I knew two. Turns out the most obscure trivia in this week’s puzzle is in the theme answers! Even though challenging, all gettable and fair. Perhaps your knowledge wheelhouse is different than mine; that is one thing I learned from appearing on Jeopardy! We are all different, and all of us are still learning! 4.5 stars from me today.

That is all! Another Jonesin’ review coming next week! 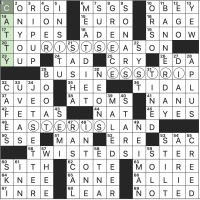 We have circles! What do they mean? It took me a minute, but the revealer is stellar!

I like it! Now I have “We’re Not Gonna Take It” echoing in my head! Guess what I now HAVE to post at the end of this video? Yes, I saw the jumbled letters, but I couldn’t figure out what was happening, so the revealer was nice to encounter. Not too hard of a puzzle, but it IS Tuesday! Nice puzzle, Jeff! 4.3 stars from me.