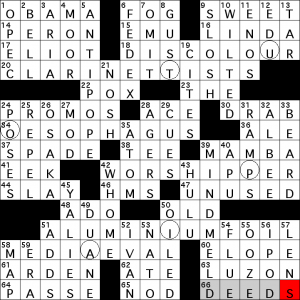 hello and welcome to episode #679 of matt gaffney’s weekly crossword contest, “More to Read”. this week 1 puzzle is a guest puzzle by the incomparable patrick berry, recently awarded the 2021 merl reagle award for lifetime achievement in crossword constructing. anyway, i attempted this puzzle without the instructions, as usual on a week 1. what are the theme answers? the six longest across answers all featured a british english spelling in both clue and answer:

in each case, the british spelling of the answer contains exactly one extra letter that needs to be removed to recover the american spelling. taking those letters in order gives UTOPIA, which … well, at least it makes the title make sense, as it’s a philosophical novel by thomas more. is there some other, cleverer connection between UTOPIA and the theme of the puzzle? i don’t know. i do know that more was an english author, and that “utopia” is derived from the greek for “no place”. maybe america is the utopia where these useless extra letters do not need to appear in our orthography.

in the fill, i enjoyed seeing {Competing claimant to the Diocese of Rome} ANTIPOPE, especially since it showed up as a memorable correct answer in last night’s jeopardy! episode involving fellow fiend blogger derek allen. (derek played great, but alas, he was not the contestant who got that clue right for $2000.) {Get-together with Mr. Spock?} MIND MELD was also fun.