This looks to be a debut for Jeff’s partner, so congrats are in order. Let me also go on record as being jealous of a last name which I think translates to “love child.”

The theme attempts to mimic SUBWAY DOORS (53a, [They slide shut, as pictured by the circled letters]) where the other theme answers each have the letter pairings DO and OR in circled letters, and taken as a whole, those pairings seem to come together as the solver moves down the grid. 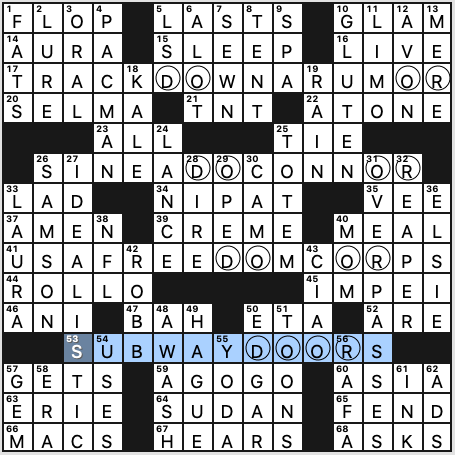 I was a little surprised at SUBWAY DOORS since I figured non-city-folk would be more familiar with a simple SLIDING DOOR, but then I noticed both halves of DOOR move inwards incrementally with each theme entry until they come together at the end, and this would be more in line with a subway door than the typical sliding door. Also notice that each bigram moves inward by the same amount each time and that the DOOR structure is perfectly symmetrical in and of itself, though not with the grid as a whole.

That would be my only gripe. The little perfectionist in my mind wants the DOOR to be symmetrical with the grid, but obviously that can’t be because of where DOOR is in the phrase SUBWAY DOORS.

Given that, it’s impressive that our constructors found phrases with the DO and OR in the exactly correct positions, and that they were able to place each phrase two lines down from the previous phrase and with everything in symmetrical position. No doubt, Jeff’s experience with left/right symmetry came heavily into play with this grid. In sum, an impressive construction.

The last thing still vexing me is the title. I’m having trouble making sense of the capitalized CASE. Give us your take in the comments.

The marquee Downs are IDEALISTIC and OVERPASSES, not bad considering they cross three themers each. PACMAN and GLUTEN add a little sparkle in the North.

Impressive grid. Four stars from me. 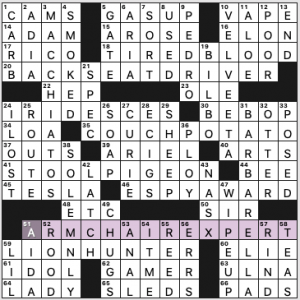 Sit down and make yourself at home. This puzzle offers four options:

It actually took me a while to see what the theme was, since I don’t see a revealer and there are a bunch of 8- to 10-letter entries that could pass for themers based on their size. You’ve got your TIRED BLOOD (right here!), an ESPY AWARD, MACCHIATOS, and the power duo of VELVEETA and BARBARELLA. 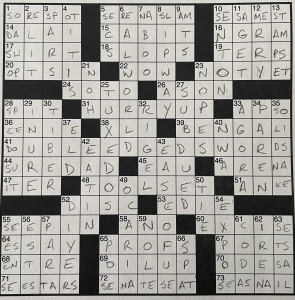 Today’s AVCX is a guest puzzle from Alex Eaton-Salners, and comes with a 5/5 difficulty rating that it absolutely earned.  I started solving this one digitally and switched over to solving on paper with as much is going on in this grid.  Looking at the revealer explains why:

The Youtube comments on “EENIE Meenie” say that the song never gets old, but it very much sounds like a “2010 Kingston/Bieber number” to me.

Other nice grid bits that intersect with the frame of rebus squares: NOT YET, BENGALI, SEEP IN, OTITIS, OCARINA, and The Mandalorian’s Nick NOLTE. 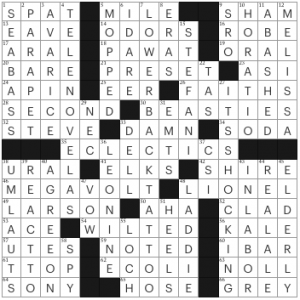 Not sure IT’S SHOCKING is truly a crossword-worthy phrase.

Did not know REAL ALE was [Beer stored in barrels and pumped without the use of carbon dioxide]. Is this the same as cask ale?

Fave clue: [À la Nala] for LEONINE, Nala being a lioness in The Lion King.

3.25 stars from me. It’s always nice to have a themeless puzzle to do on a Wednesday, though! 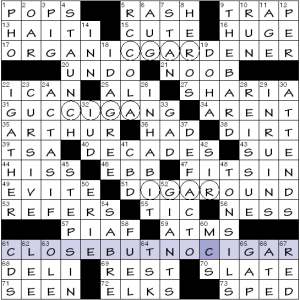 And finally an explanatory revealer:

In each instance the four letters span two words in a phrase.

So. You know what I’m going to point out, right? You can feel it, yes? 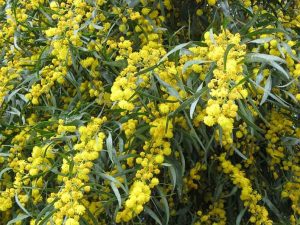 There’s a variant missing: CI–AR. So let me introduce you to the swamp wattle, also known as water wattle, wirilda, mimose de quatre saisons, and everblooming acacia. Its scientific name is Acacia retinodes. There are other options for the CIAR tetragram, but this was among the most entertaining to me.

So, good puzzle with a fun little theme and— 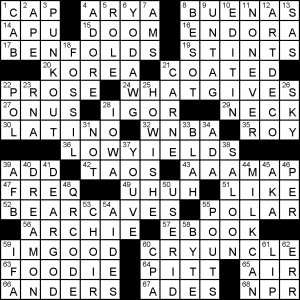 I had a few fake outs on the way to figuring out the theme of today’s puzzle by Julian Lim. The first entry was BENFOLDS and I thought the lack of FIVE might be thematic. It wasn’t. I then noticed the repeating final plurals, which in the case of LOWYIELDS and, to a lesser extent, BEARCAVES was a tad awkward. However, reaching CRYUNCLE, I first spotted UNCLEBEN; however the clue says look at the last words, not the first: FOLDS, GIVES, YIELDS and CAVES are words of surrender. No mas!

The long entries were definitely striving for their own voice: YODAWG, QRCODE (but crossed by FREQ), HOWISHE and PUNKOUT stand out. I’m guessing HOWISHE is a bail-out giving it crosses three theme entries.