I BEFORE E (60a, [Part of a spelling rule, and a hint to this puzzle’s theme]) makes for a cute revealer and basis for adding an I to certain phrases. I’m imagining someone learning that rule and then rampantly applying it whenever they encounter an E. 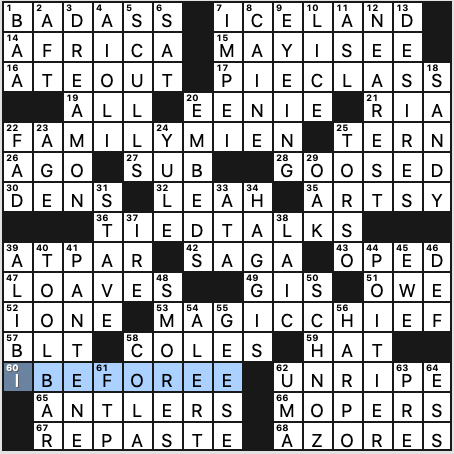 I wanted to like this, I really did. I think the revealer makes a good basis for a theme. But each of these entries has its own problem. And while I appreciate that the pool of potential entries is limited because extraneous E’s must be avoided, there have to be better choices than these. (How about AIR BASIE [Big band leader’s line of basketball shoes?] just for starters?)

The fill is quite nice. I especially like starting off a grid with BADASS. Elsewhere, I spy “MAY I SEE?,” “DREAM ON!,” HAGGIS, TOOLBAR, POITIER, AZORES, and SCHNOZ. Fun entries. REPASTE falls on the blah side.

This could have been a fun one, but the theme entries were problematic. Three stars.

I had no idea what was going on here. I wandered around the grid kind of at random until something started to make sense. The clues to the theme answers form part of the first word of each two-word phrase and the second one meets the definition. That’s confusing. Here, let me show you with Peter’s grid. 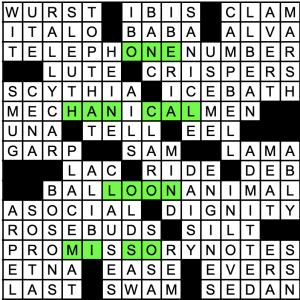 I haven’t seen a theme like this before. I’m not sure what I think of it. It was challenging but not all that much fun to solve. I do like the one/two/one/two pattern of the answers.

What I didn’t know before I did this puzzle: that SCYTHIA was a region north of the Black Sea during the Iron Age. 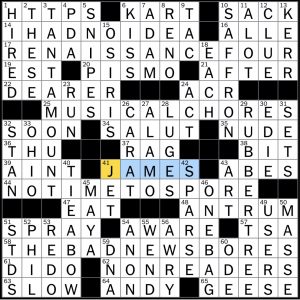 This is a pretty straightforward Thursday NYT, as far as these things go, with some phonetic fun going on:

The “A” sound of RENAISSANCE FAIR, MUSICAL CHAIRS, NO TIME TO SPARE, and THE BAD NEWS BEARS becomes the phrases above.  Done and dusted.

The theme is pretty straightforward, but there’s a lot to like elsewhere in the fill, too.  HTTPS, I HAD NO IDEA, PISMO Beach, Port SALUT cheese, DIDO, GEESE going across, and OSIRIS, SAFFRON, TANTAMOUNT, and RUBBER TREE going down.

**Unless I’m mistaken, this appears to be a debut from both of these constructors. Very rare to see a collaboration with two debuts! Congratulations. 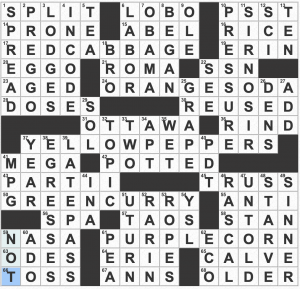 And in ROY G. BIV order to boot!

Fun theme today… though I must say I feel like I saw a colored food theme very, very recently. Hmmm. I think it was a Burnikel puzzle. Let me check that…

Yup! About a month ago.

I rather enjoy coincidences like that, though I’m sure it causes distress for some constructors when they see a similar idea published soon before their own. Plus, both of these were enjoyable on their own merits. This version had the added bonus of rainbow order and included the colors in your original Skittles package (there’s a nudge to remind you of the Skittles connection in the last theme clue if you didn’t make the connection from the Skittles slogan in the title).

Thanks to Stella’s #crypticlueaday on Twitter, I’ve dipped my toe in the cryptic waters. I’m still in the wading pool. I can finish the Puns and Anagrams puzzles, though, so that’s a win! I don’t know if I’m noticing more cryptic-ish clues in standard crosswords or I’m more aware of them now. Brendan isn’t cryptic at all about this theme. I knew there were anagrams somewhere and pretty much ignored the theme until I got to the revealer. 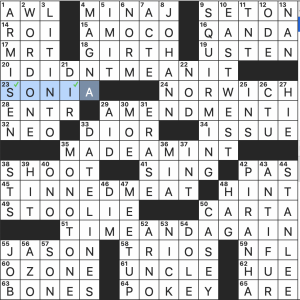 And the revealer: 51a [Repeatedly, or if read a different way, a cryptic way of signaling a letter bank for the other theme answers] is TIME AND AGAIN. As I said, I’m still a cryptic newbie; here’s my take. “Read a different way” would be TIME AND, AGAIN – all four theme answers are comprised of only those seven letters. I know more cryptic-savvy commenters will let me know if I missed something! I liked the idea of this theme despite my grumbling about AMENDMENT I.

What I didn’t know before I did this puzzle: see above re: SONIA and her crossings. I’ve also never heard of JASON Statham. 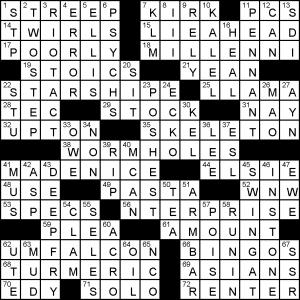 Kind of mix-and-match theme today. Two quintessential mid-20th century live-media Sci-Fi spaceships: STARSHIPE/NTERPRISE and MILLENI/UMFALCON and pilots thereof: KIRK/SOLO. Then WORMHOLES shoehorned in to justify breaking those ships in half?? A weird twist to be sure.