A double debut! Lisa and Ada are upstairs/downstairs neighbors. I hope we see more from them because this one is really good.

Each theme answer is a word or phrase amusingly clued – and we have circles. 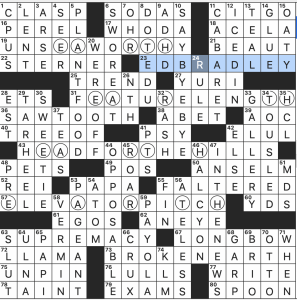 And the revealer at 73a: [N.K. Jemisin series that won three consecutive Best Novel Hugo awards….and a hint to this puzzle’s circled letters] is BROKEN EARTH. Each set of circled letters breaks up EARTH differently. I love this theme. I love the pun in the title. I love the appreciation of Jemisin. I love the funny clues for the theme answers. So many layers, so much extra fun!

What I didn’t know before I did this puzzle: that ED BRADLEY was the first Black television White House correspondent. I’m horrified to realize that was 1976. I shouldn’t be surprised. 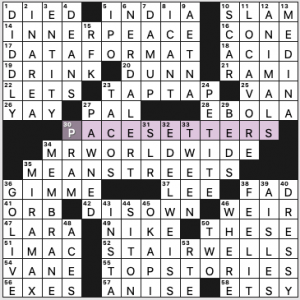 I enjoyed the heck out of this puzzle! Finding enough long answers I could pop into the grid instantly is always fun, isn’t it? We all like to feel smart, and puzzles full of stuff we don’t know can interfere with that (unless, say, it’s a Newsday Stumper we eventually triumph over).

Shout-out to my marathoner spouse for teaching me about 30a. [“Rabbits” in a race], PACE-SETTERS. Rabbits basically get paid to run their fastest for a portion of a marathon, going all out since they need not save energy for the last few miles, coaxing the (other) elite runners to amazing performances. Sadly, costume bunny ears and tails are not part of the gig.

Fave fill: INNER PEACE, “TAP, TAP,” MR. WORLDWIDE (did not know this was a 34a. [Sobriquet for international hip-hop star Pitbull], but I know he’s been huge in Latin music), MEAN STREETS, our TOP STORIES, DIDDLY-squat, “NERD ALERT” (response to “I run a crossword blog”?), EDELWEISS (my 1st-3rd grade school song was to the tune of “Edelweiss”), LOCAVORE, and FEEL IT. And Johnny WEIR!

4.5 stars from me. Keep them coming, Matthew!

Theme: Road signs in phrases. The revealer at 61a is SIGN HERE [Instruction on many official documents, or a hint to the starred answers’ starts]. 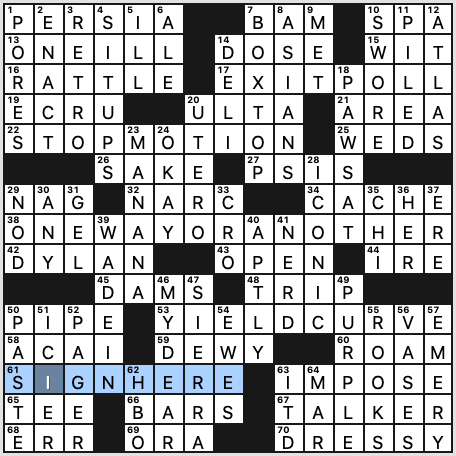 Hey, that’s a nice theme! I wasn’t paying attention until I got to the revealer, then I looked up and said, “Cool. That works.” Always nice when that happens.

On the negative side, there’s not much sparkle in the grid. In fact, I’m not seeing any entry longer than six letters apart from the theme answers. But there are a lot of 6s and some of them are quite nice: PERSIA, SIT-UPS, BOX TOP, MAÑANA, “MY DEAR,” and PURPLE. And there’s not much to gripe about beyond plural PSIS, so I’ll take a clean grid even without some long Downs, as long as the theme is good. 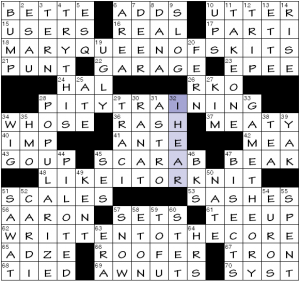 A 16×15 grid and left/right symmetry accommodates this vowel-shift theme.

Referring to the International Phonetic Alphabet, what’s going on is ɒ → ɪ. That is, an open back rounded vowel becoming a near-close front rounded vowel.

Each case necessitates an additional spelling change to a non-vowel part of the word, so we’ve got that consistency.

Nothing amazing, but a perfectly serviceable and entertaining crossword. 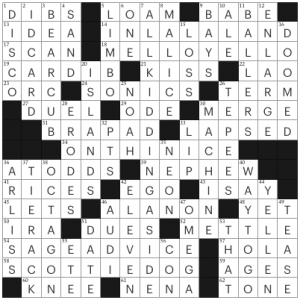 I’m languishing today with a headache, so quick recap.

Fave fill: IN LA-LA LAND, MELLO YELLO, CARDI B, ON THIN ICE, SAGE ADVICE, SCOTTIE DOG, BEAR CUB (my aunt and cousins encountered some cubs in the Great Smokies this week!), “ALL KIDDING ASIDE,” BALLERS, Janet YELLEN, and “WAY TO GO.” Also appreciated BRA PAD in a puzzle written and edited by women. It’s a common thing! Just not a thing dudes generally pay attention to.