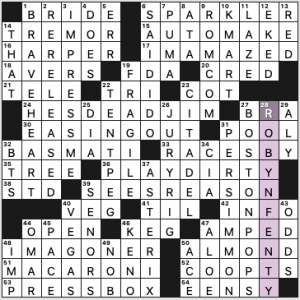 Waaaait a minute. What’s with this standard crossword rotational symmetry? Brooke is branching out in this collaboration. Nary a 12- to 14-letter entry to be found! But you know what? These 7- to 10-letter entries are SPARKLERs, too. (P.S. I hate 4th of July sparklers. Don’t drop it on the ground and go barefoot!) 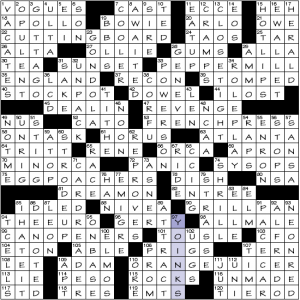 Theme-adjacent material, though only one is clued in culinary fashion: COOLER, APRON, DISH. (7d, 69a, 78a) 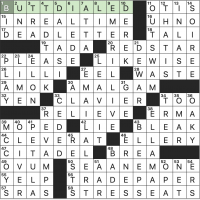 Fun times! Not overly quick today, but definitely a fun solve. Lots of fun stuff in this one. Did I mention I had fun? I am not too familiar with Kurt Krauss’ byline, but I think I have seen it a few times before. If I was really stats inclined, I would start some sort of database of all the constructors I have blogged, but that would take a bit since I have blogged probably 1,000 puzzles or so by this point. Who has that kind of time?? (Now that I say it out loud, I am kinda curious now!) Nice puzzle, Kurt! 4.5 stars from me. 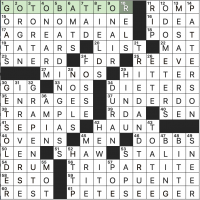 Full disclosure: I solved this while watching TV! I don’t think this is overly tough, but it also isn’t easy. I think Stan might be finding a sweet spot of difficulty, although I think I am in the camp of I like them hard. Fair, but difficult. Part of my joy of solving is getting lost in my thoughts. “Vibing,” as Paolo Pasco would say. That did not happen here! But still a fun solve. 4.3 stars today.

My suspicions last week that there would be more themelesses to come were correct! Woo hoo! 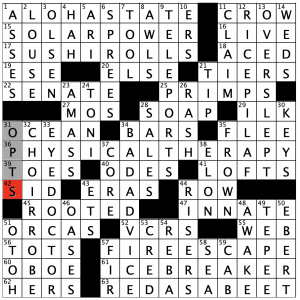 Not much to grimace at. Really nicely crafted puzzle. The only nit I have is the clue for TIP [Reward for a waiter]. I don’t think of that as a reward. It’s a waiter’s pay that they earned for working. Reward carries a different connotation for me.

I have a feeling the Saturday themeless streak will continue for at least this month. Perhaps beyond? Fingers crossed!