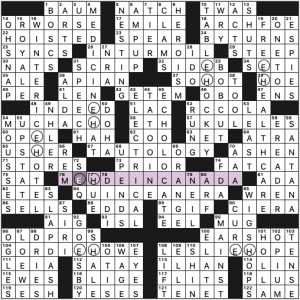 Fun puzzle, but it should have been saved to run in two or three weeks, closer to Canada Day. The theme is 76a. [Like all the answers with pairs of circled letters, punnily], MEHDE IN CANADA, with that “eh” standing in for a long A in made, and a circled EH appearing naturally in a bunch of Canadian names and phrases:

Nice grid overall, with plenty of longish fill and very little in the way of junk. Seven things: 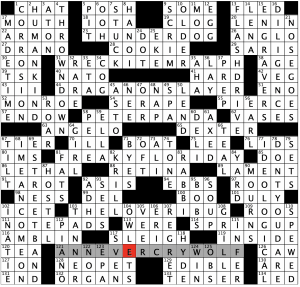 I haven’t tried to look for the meta yet. I bet if you take a look at the letters added that’s either the answer or a strong hint. I’ll go back and highlight those now and take a look.

Never heard of a couple of the base phrase titles (Never Cry Wolf, Dragon Slayer, and Underdog to be specific), but the Birnholzian staple wackiness+ in the clues made it easy enough to figure out.

This is one of those puzzles that can please both parties: Those who enjoy metas and those who do not, so I hope the gripes about metas are minimal :) Also, it’s one of the easiest metas that the WaPo has featured, which is great for introducing this puzzle genre. Often, with this type of theme, there would be a revealer saying something like [Disney Plus hit… and what’s spelled out by the added letters in the answers to the starred clues] leading the solver to THE MANDALORIAN.

Fill felt pretty standard today. Not too new-name heavy! I’m familiar with DEXTER Gordon, though I suppose that might be new for a lot, but the name is super inferable.

Not too much else to say about this one other than I enjoyed it! Now, off to DRAG all those NON-SLAYERS in my neighborhood.

Theme: Phrases whose first letters are a note on the musical scale, have those letters replaced with the next note up on the scale. Crossword wackiness ensues. 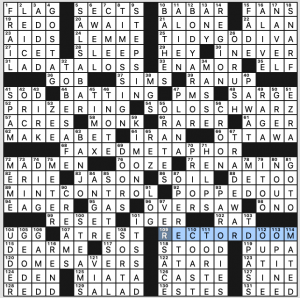 I quite liked this. It’s well-conceived and expertly executed. The title is so concise yet perfectly suited to describe everything that’s going on, and the entries are ordered such that as you look at those opening letters of each entry from the bottom of the grid going up, you travel up the musical scale. Unfortunately, most people solve from the top down, but that’s neither here nor there. It makes sense to have DO at the bottom and move up to TI. A very elegant touch, that. Plus there’s a good amount of humor present. A couple of those entries are certainly chuckle-worthy.

So let’s see. What are our long non-theme entries? TO BE SAFE, TRADE WAR, SALSA BAR, PARODIES, TIMES SIGN, OPERETTAS, STEPS IN, VERSACE, MAKES A BET, BODY ARMOR, STATE SEAL, PRIZE RING, POPPED OUT. I’m not so sure about those last two. I don’t think I’ve ever heard the first one (clued [Boxing match site]), but then I’m not one for watching boxing. And the second is clued [Suddenly emerged], which sounds more like POPPED UP to me. But on the whole, very nice long fill.

Elsewhere, I like the pairing of quaint “I NEVER!” and “DEAR ME!” which are in symmetrical positions in the grid. Cute.

The “wise” of the title is a pun on “y’s.” Each theme answer has a Y added. I like the theme idea; I have some issues with the execution. 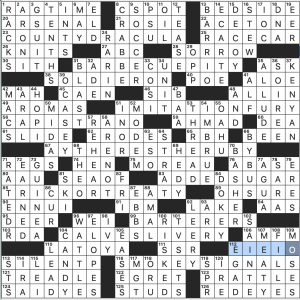 I realize I’m being very picky about the sound-alike thing, and I can let that go. The sudden switch to Y at the beginning doesn’t please me.

What I didn’t know before I did this puzzle: that Nicole Kidman was born on OAHU.

THEME: Phrases that start with homophones of BYE. 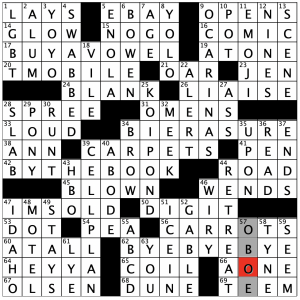 Cool theme! I’m surprised I haven’t run across it before. The N-Sync title almost screams “Make a crossword out of me!”

Bi-ERASURE was a new term for me. According to GLAAD, it is defined as “…a pervasive problem in which the existence or legitimacy of bisexuality (either in general or in regard to an individual) is questioned or denied outright.” There’s an interesting article about it here. I must say I did find it odd to have an entry about sexuality erasure while the Q seems to have gone missing from 1D.

Some excellent cameo appearances from the hilarious Tig Notaro (clued in 16A), BOWEN Yang of SNL, JEN Kramer (who was a new name for me), and TYNE Daly.

Thanks for this one.