This week we’re told, The answer to this week’s contest crossword is a five-letter noun. The grid took me a while to complete. Once done: I only spotted two potential long themers: GIFTOFGAB and ARKANSANS. Looking for more, I noticed 70d, the last horizontal entry: DOT (“E, in Morse code”). Scanning for E’s I spotted five, matching the “five-letter noun” mentioned in the notes. Five was also mentioned in 56d (STAR, “Shape made by five connecting points”). And five E’s is quite low from a frequency distribution standpoint

So we’re looking to “connect the dots” (meaning the E’s) in a STAR pattern. Next question: how? I tried to draw a STAR on the grid using various techniques, which was challenging because the E’s were somewhat consistently spaced, but were not actually symmetric. 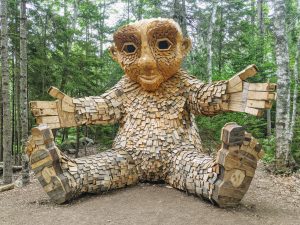 Lilja the giant troll has nothing to do with this meta, but just wanted to say “hi”

I decided to sleep on it, and gave the puzzle a quick glance in the morning before heading to Boothbay Harbor to see the Giant Trolls created by Danish artist Thomas Danbo at the Coastal Maine Botanical Gardens. While driving: I realized I was probably missing another themer, and thought about 55d (NODE, “Point where two lines intersect”). I could see a star with five intersecting lines in my mind’s eye, was confident that this was the final step, but I didn’t have the puzzle with me in the car (and my mind’s eye wasn’t sharp enough to see the actual letters), so I had to wait. The feeling of a nearly-completed meta itched at the back of my brain, but we had a wonderful day hunting for trolls in the beautiful gardens. 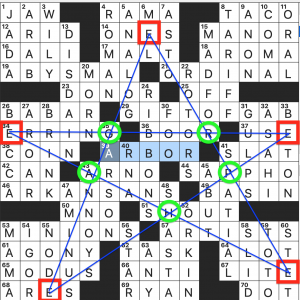 Upon return: I drew lines connecting the E’s, which formed a STAR, with the two lines intersecting on five letters spelling GRAPH, our meta solution.

NODE helped push me over the finish line, but the puzzle would be solvable (albeit harder) without that entry. NODE also made the solution cleaner by removing the ambiguity of non-intersecting lines (forming a pentagon around the edge). The MGWCC has a predictable week 1 through week 4/5 difficulty increase, but the WSJ meta doesn’t, so I wonder what factors into Mike’s decisions on whether to include entries like 55d. Impressive construction either way. We drew a big star on the grid, so we’ll end with Big Star’s Thirteen, which Alex Chilton famously called “one of my almost-good songs.”