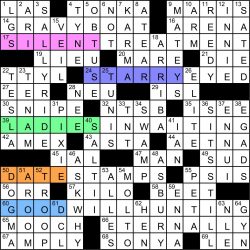 Hello everyone! Hope you all are doing well as the official start to summer is right around the corner.

Some hot and sticky nights are ahead, but the nights mentioned in this grid are a whole lot of fun. Each of the first words in the five theme entries is a word that can come before the word “night.”

The intersecting non-themed long entries in the northwest and southeast were beyond delightful, from the history-making SALLY RIDE (3D: [First American woman in space]) to GRAVY BOAT making me think of Thanksgiving a few months early (14A: [“Saucy” Thanksgiving Day serving dish]) to SITS STILL making me a little dizzy when typing it in given its palindromic nature to the first seven letters (36D: [Doesn’t fidget]). Initially put in “Etna” for ENNA, which would definitely make for a, um, interesting (and hot) time at that particular resort (59D: [Sicilian resort]). Some sports crosswordese to clarify if you’re not aware, but NLE would stand for “National League East,” the division in which the Mets currently sit atop of at the moment (63D: [Mets and Marlins div.]). Of course, I’m typing up this blog entry inside of the press box of Citi Field, home of the Mets…and the team they are facing is from Amy’s neck of the woods, the Chicago Cubs. Can’t make this up…

“Sports will make you smarter” moment of the day: MOOCH (65A: [Be a parasite]) – About a quarter of a century ago, former NFL head coach Steve Mariucci was considered a young hot-shot of a head coach prospect. When Brett Favre started his Hall-of-Fame career in Green Bay in 1992, “Mooch” was Favre’s quarterbacks coach there. Mariucci became a head coach at the University of California for one season before being hired as head coach of the San Francisco 49ers in 1997. In six seasons in the Bay, Mooch compiled a 60-43 record, including an NFC Championship Game appearance in his first season in 1997. After being fired after the 2002 season, Mariucci became the head coach of the Detroit Lions, where he was less than successful in three season (15-28). Over the last number of years, Mooch has been a television analyst at the NFL Network. 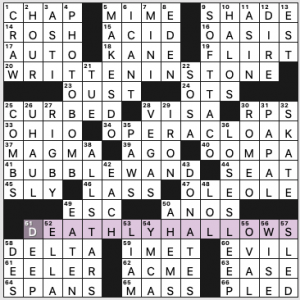 I’ve seen the Harry Potter movies (I think all of them? there’s a chance I missed one or two in the series) but I’m not at all an obsessive, so this theme didn’t magically assemble itself in my grid. Theme revealer DEATHLY HALLOWS is a 51a. [Set of legendary objects from the Harry Potter series found at the ends of 20-, 34- and 41-Across]. Those three entries end with a STONE, CLOAK, and WAND:

Theme’s all right, but going the Potter route doesn’t feel particularly new or fresh, an OPERA CLOAK is sort of an oddball item to include, and one of the three themers is an adjectival phrase rather than a noun.

Ah, that’s better after yesterday’s distasteful grid. AES is here to put us back on track.

The revealer is BED / SPREAD (65a, [With 66-Across, cover of sorts, and a description of this puzzle’s theme]). In addition, there’s a pseudo-revealer at 62a SIZE [One of four in this grid]. The other theme answers are familiar phrases that include bed sizes in circled letters and spread out from first letter to last. 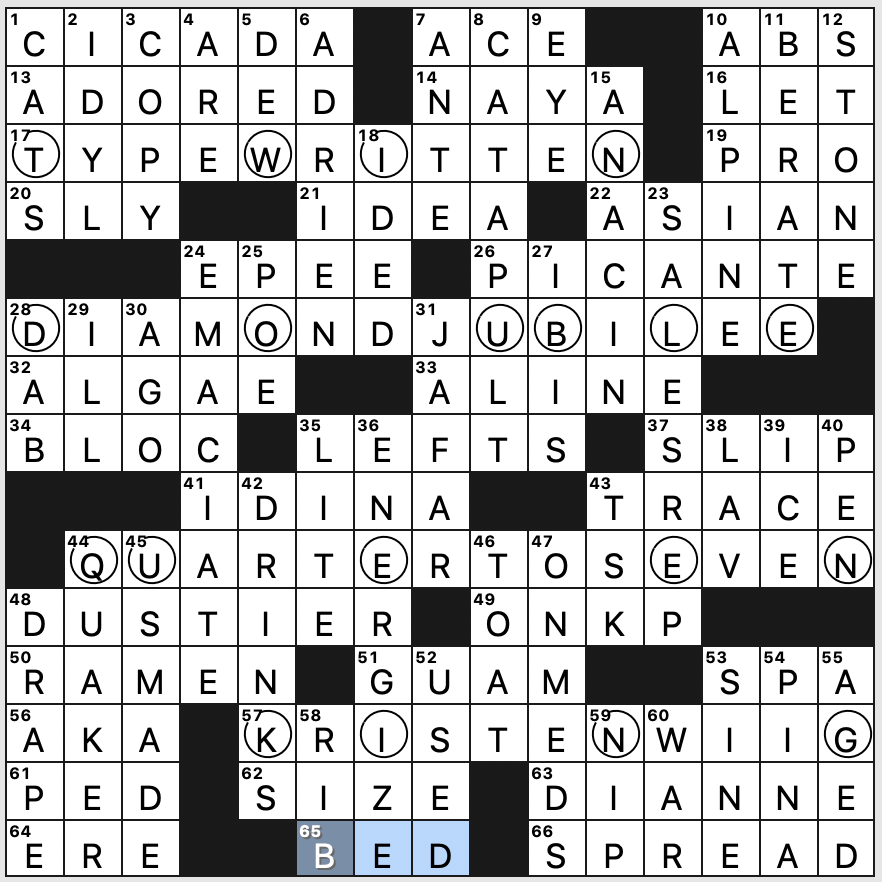 All in all, very nice, and just right for a Tuesday outing.

Top entries in the fill have to be CATAPULT and “ENERGIZE” clued geekily as [“Beam me up!”] with SALES REP and EMACIATE rounding out the long entries. PICANTE adds a little spice, and JAFAR and QUAKER make for nice Scrabbly entries. Starting off the grid with a fun CICADA is a nice touch as well.

I’m not so sure about cluing LEFTS as a verb [Turns across traffic]. I’d stick with something like [Southpaw punches].

I have to mention GUAM [“Where America’s Day Begins” island] which is where Alex was born and which is my ancestral home (I lived there for a year when I was a kid but both my parents are born and raised Chamorros). In the notes to his recent AVCX puzzle from last week, Alex gave me a shout-out and linked to the series of puzzles we collaborated on with GUAM themes for the island’s daily newspapers. This seems like a good place for me to do the same. There are four of them in total. Knowing a little bit of Chamorro is helpful, but not required. We titled them Island Time, Travel Advisory, Seal of Approval, and Home Base. 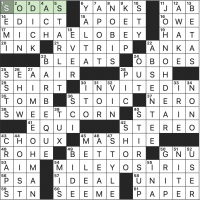 It actually took me a minute to figure out the title, not the theme. But it all makes sense once you think a second. Here are the themers:

As you can see, Matt has taken some famous people’s names and add an “O” sound before the surname, as in O’Leary or O’Connor, popular Irish names. But it is only in a phonetic way, as the ensuing names leave plenty of room for Jonesin’ puns. A smooth Jonesin’ solve this week, and I didn’t find too much obscure trivia either. Maybe other solvers might disagree! 4.4 stars from me.

Only a few notes: 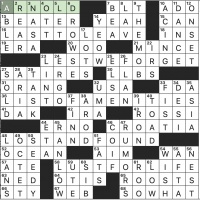 Is this a debut? This byline was not in the constructor list on this site. If so, congrats and kudos for a clever puzzle. We have a clever theme today! Here are the theme answers:

So we have all of the vowel iterations of L?ST that have the vowel in position two. As a side benefit, all of the theme answers are three words, which is also a nice touch. So simple it’s genius! Very well done, and looking forward to more puzzles from you, Darryl! 4.5 stars from me. 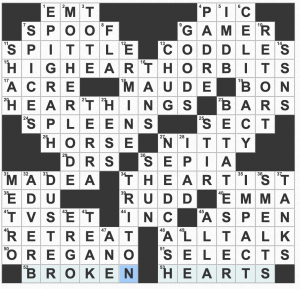 Always fun to open up a puzzle and balk at its shape. In this case, it’s not entirely symmetrical at all in order to accommodate the heart-like shape with a slash down the middle. Or at least that’s what I see. Kinda has a Rorschach feel to it. If you told me it was a four leaf clover I’d probably say “Oh yeah… I can sorta see that…”

In the fill, liked:

MOTHERLODE, BETA TESTER (fun clue!), and ALL TALK. Interesting to see RUDD as we are watching the 1996 version of Romeo + Juliet in my 9th grade class on the last day of school, and RUDD plays Paris. It’s quite remarkable how little he has aged in the past 25 years.

This appear to be a debut puzzle for Evan Mulvihill. Congratulations! Bold concept for a debut :)

Overall enjoyable- the revealer was a nice AHA. Even if the execution felt a little wobbly to me.