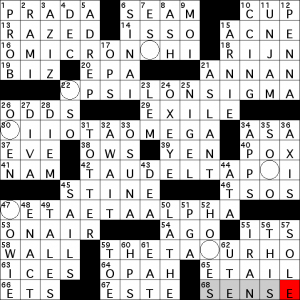 hello and welcome to episode #680 of matt gaffney’s weekly crossword contest, “Split Decision”. for this week 2 puzzle, the instructions tells us that This week”s contest answer, which is six letters long, is where you’ll find this puzzle’s missing clues. what are the theme answers? the six longest across answers all have the same clue, and a string of 2-3 greek letters for the answer:

so presumably there is a logical way of disambiguating each of these pairs of letters to find the unique solution. my first thought was that taking one of the options for each pair might spell out a six-letter word. but looking at C/P, E/U, P/X, H/S, B/Z, M/N doesn’t look promising, since it would have to end with an outlandish four-consonant cluster. trying a similar approach by choosing one of the two greek letter options instead of roman letters has the same problem.

my second thought was that perhaps a clue elsewhere in the grid might be able to be reused for the missing down clue in each case. there are some things that look like they might almost work, like {Taste or touch, say} SENSE for ESP, or {“___ is the last straw!”} THIS for ESO, but those match the answer better than the clue.

another idea is that perhaps the first letters of the clues spell out the missing clues, acrostic-style. that would be neat… but that does not appear to be what is happening in this puzzle.

where else can the missing clues be hiding? i certainly considered both the email with the puzzle and the mgwcc website, but didn’t find anything unusual in either of those places. so it really must be somewhere in the puzzle itself—either in the grid or in the clues.

let’s go back to the grid idea, because ESO/THIS and ESP/SENSE were the most promising things i found. is there another possible one-word (or one-entry) clue for either OXEN or OPEN? i don’t think OXEN are particularly {Spielbergian creatures} ETS, and there’s also nothing i can find that might work for either HOMES/HONES or SOHO/SOSO.

what about the title? “split” makes me want to combine either two clues or two entries to make each missing clue. something + SENSE could be ESP, and something else (presumably something indicating spanish) + THIS could be ESO. but i’m really not seeing it. i would love “sixth” to go with SENSE because everything about this meta comes in sixes, but nothing else seems to work that way.

oh hey, OPEN is right here in the clue for OSUNA: {Rafael ___ (Mexican tennis player who won the U.S. Open in 1963)}. and the next clue, {Downloads for phones}, hides HONES. are all these hidden? … no, there’s definitely no BOWIE or ZOWIE hiding in the clues.

well, it’s pretty frustrating to be stumped on a week 2, but i am well and truly stumped. i’m going to submit SIXTHS as a wild guess, but i’d love to hear in the comments what i missed.