This puzzle has the Patented Peter Gordon Very Long Clue as well as the correspondence between the first and last answers, so it’s a Very Fireball Themeless. I did not find it blazingly hard. Definitely enjoyable! 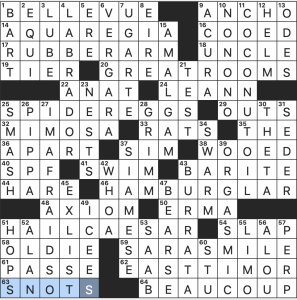 What I didn’t know before I did this puzzle: that BURRATA is made from mozzarella and cream. I did know that it’s delicious.

Theme: ON THE ROCKS (56a, [How three circled words are served in this puzzle]). Those circled words spell out types of alcoholic drinks that sit atop other entries that all share the nickname, “The Rock.” 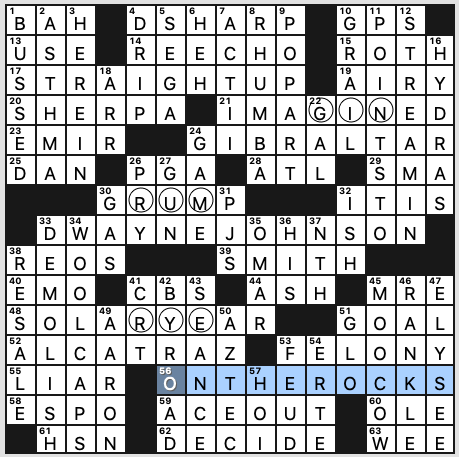 This was a fun theme with a very nice aha moment. Truthfully, I can’t recall if “The Rock” is an actual nickname for GIBRALTAR or if it only goes by its full name, “The Rock of Gibraltar.” But I have a feeling the locals use the former.

Oh hey. I just noticed 17a STRAIGHT UP clued [The opposite of 56-Across]. Nice, theme-adjacent entry helping to keep things somewhat symmetrical in the grid.

The only thing that irks me about the theme is the title, “Make It a Double.” I realize that’s a standard phrase when ordering a drink, but it implies something is doubling in the grid, and that’s not the case. Since the wordplay revolves around “The Rock,” it makes sense for the title to be something to do with rocks, without saying “rocks.” Perhaps, “Stoneware” or “Stonework” or even just “Stoned” might work.

Top fill: WOOL CAPS, MOO COW, SHERPA, RHUMBA, ELYSEE, HYDRAS. Plenty of good stuff to like, although there does exist REECHO [Sound yet again] which looks crazy in the grid. Other kludgy bits: SMA, REOS, ESPO, ERTE, HOI. But frankly, I enjoyed the theme and nearly forgot about this stuff. 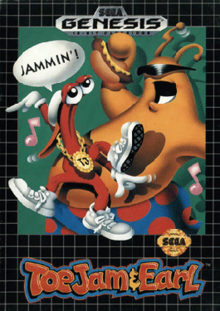 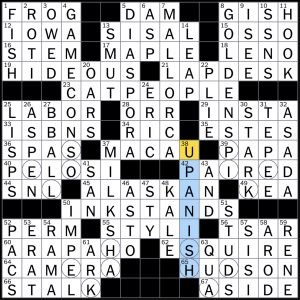 I really like how the full theme on Blake Slonecker’s latest for the NYT slowly revealed itself as I filled in more of the grid.

Working with crossings, I was quickly able to get a revealer that each set of circled squares in the grid represented a FISH HOOK (1D/11D), and from there it wasn’t hard to fill in SOLE, PIKE, HAKE, and SHAD.  If that was all that was going on, it’d be nice, but not quite at the full level of a Thursday NYT for me.  That’s where the answers that lead into each of those HOOKs lead:

Each of those FISH HOOKS is required to finish the answer — we’ve got GAME CONSOLE, GOLDEN SPIKE, MILKSHAKE, and UPANISHAD.  It was a satisfying resolution to what was going on.

In things I learned from the puzzle today: the FROG is an Egyptian fertility symbol, MACAU is the source of the Portuguese creole language Patuá, and “Accouchement” is another word for LABOR.

THEME: Rather tall dishes are running downward in the grid. 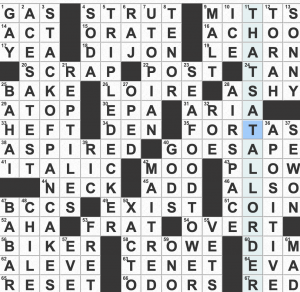 I had wrongly assumed that the revealer was the title today, which happens here and there with Universal for me. I just assumed it was foods going down. So I was wondering what was so special about the themers and why they were chosen in particular before I hit that last themer and had a nice little AHA moment. Mind you, I didn’t cry “Aha!” as the clue for 52A might lead you to believe (a Universal staple is to make meta references to crosswords in the clues, which often feels forced to me). But it really was a nice way to pull those together. It also had me think of the themers “going up” in a sense rather than coming down as the title suggests. 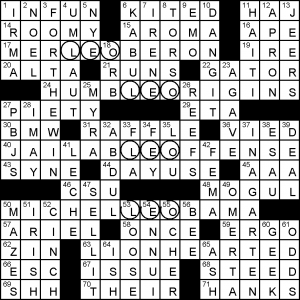 Today’s puzzle by August Miller is LIONHEARTED: specifically LEO, the celestial lion. The puzzle played very easy for me, but perhaps was bumped to Thursday due to the double name action of MERLEOBERON (only the dimmest recognition of the name) & MICHELLEOBAMA. HUMBLEORIGINS is idiomatic, while JAILABLEOFFENSE, well that’s something of a loaded gun.

This puzzle seems to be a matched set with today’s NYT. Each theme answer spans an entire row, connecting what look at first glance to be two separate entries. 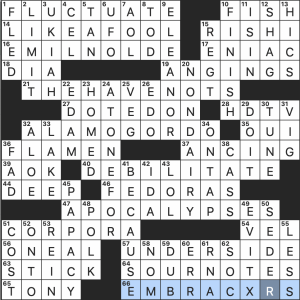 There’s a revealer: 10a [With 63-Across, classic kid’s lunch, and a visual description of this puzzle’s theme]: FISH/STICKS. Definitely more fun to solve that they were to eat! I enjoyed this puzzle – and I think I would have enjoyed it even more if not for the eerie resemblance to the NYT which gave it a deja vu quality.

What I didn’t know before I did this puzzle: that a bailaor is a flamenco dancer.