It’s a delight to see Lynn Lempel’s byline here. She doesn’t have too many WSJ-published grids, but of course she’s long been a mainstay over at the NYT with nearly 100 printed puzzles—the vast majority of which fell on Mondays and Tuesdays.

Using the title as a hint, we see that OP has been added to familiar phrases. 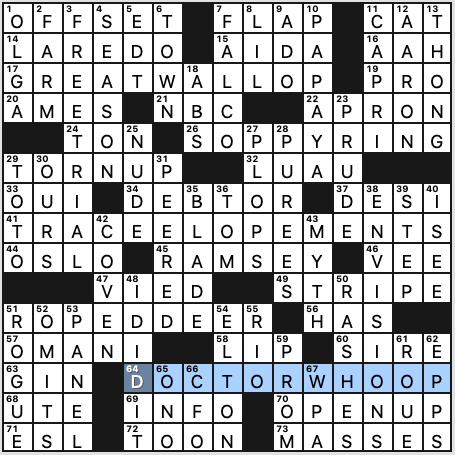 Solid and cute. Just a tweak on the one clue would do it, methinks.

PAPAYA the CAT helps with a puzzle

Fave entries are the aforementioned FREE TRIAL “I DID IT!,” and PAPAYA since that’s the name of my sister’s CAT. 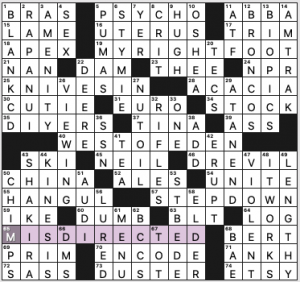 In this 16×15 grid, Finn reimagines the term MISDIRECTED as referring to both film directors and directional words, with movie titles having the wrong direction in them. The revealer’s clue is 65a. [Led astray … or like the films at 19-, 25-, 40- and 57-Across?], and here are those four:

My kingdom for a suspenseful South by Southeast. 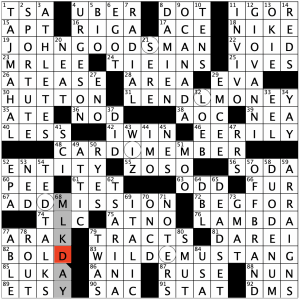 Editor Ben Tausig has today’s AVCX!  I thought the theme was cute yesterday when I solved it, and I thought it was even cuter once I realized an additional layer to how it worked.:

I thought this was cute when the way the circled letters curved into DMS was a representation of how you can SLIDE into someone’s direct messages on Twitter.  Then I realized that each letter of SLIDE slides in between the letters DM in the theme answers.  It is, as clued, “oh-so-smooth”.  Well done, Ben!

A few other nice grid bits: TAJ MAHAL clued as “Noted Muslim mausoleum” and OFF-BRAND clued as “Like Prongles and Unbelieveable This Is Not Butter” 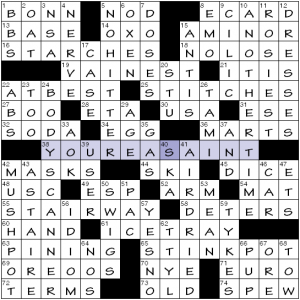 Fine theme, but not particularly exciting. Similarly, the solve felt as if I was mostly filling in a lot of entries by rote. 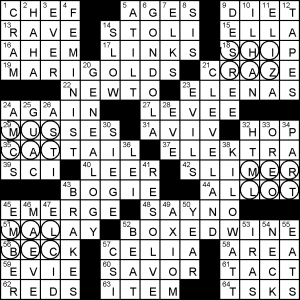 Dana Wilson is not a name I recognize. If this a debut or near debut, it really shows a lot of polish!

Today’s theme celebrates chateaux cardboard, aka BOXEDWINE. However the four wines packed in 2×3 boxes are a bit larnier: SHIRAZ, MUSCAT, MERLOT and MALBEC. I found MUSCAT first, and was expecting a capital city theme for a time.

I admired the choices made regarding black square placement. The puzzle is a tad more boxed in than normal, but that is good given the stacked theme squares. The longer entries were mostly one-word, but still an interesting selection: FEMINIST/GENEALOGY, CATTAIL, GONDOLA, KILOWATT and a couple of names I don’t think I’ve seen before: ILHAN and SLIMER. 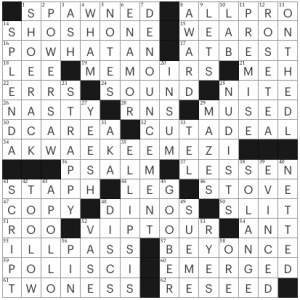 Lots of inclusivity in this puzzle, always nice to see.

New to me: AKWAEKE EMEZI, [“Freshwater” author]. There was a stir in literary/Nigerian circles recently when Chimimanda Adichie wrote an essay complaining about younger writers who’d called out her transphobic comments. Emezi is nonbinary and transgender, and the novel Freshwater came out in 2018.

Tons of good clues, as you expect from Erik, but it’s late and I want to get this up so I’ll sign off with 4.25 stars.