It’s an Inkubator themeless! I found it a bit easier than an average NYT Saturday and still chewy enough to be fun. 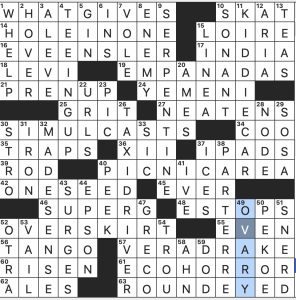 What I didn’t know before I did this puzzle: see above re: Inbee Park. I also did not know that auditorium seating on the ground floor is the PARTERRE. 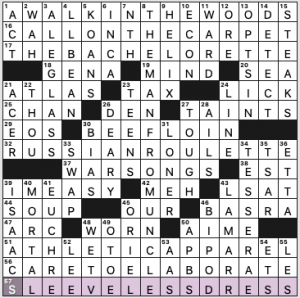 Feels like it’s been a minute (that is contemporary slang for “a longish while”) since we had a punchy pair of triple stacks in the NYT. This puzzle has trios of 15s at the top and bottom, plus a middle Across, all connected by a vertical 15. And they’re a lively batch of entries! The Bryson book A WALK IN THE WOODS, CALL ON THE CARPET (I tried READ THE RIOT ACT but it’s not long enough) and THE BACHELORETTE are in the attic, with ATHLETIC APPAREL, the great “CARE TO ELABORATE?”, and a SLEEVELESS DRESS in the basement and retro THE MAN FROM UNCLE as the elevator past RUSSIAN ROULETTE. You can carp that SLEEVELESS DRESS is there only to provide lots of S’s and E’s, but it’s far more a thing than, say, some noun formed by adding a -LESS and a -NESS.

Now, the price we pay for juicy 15s is typically iffy crossing fill. I’m not wild about WAH, ALE GLASS, and crosswordese ORIEL, but hey, the rest of the crossings range from fine to quite nice. Congrats to Mr. Larsen on the results of his (undoubtedly protracted) efforts. 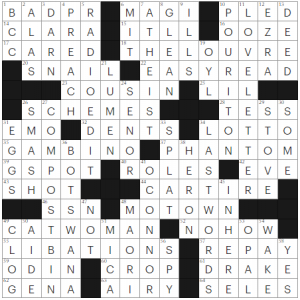 As described, this is a ‘lightly challenging puzzle’. It’s a themeless, as I believe all the New Yorker offerings are.

We get a nice, flowing grid with smooth fill. There was never a moment where I needed to slow down or anything.

If you’re interested in listening to the complete album, the playlist is here. 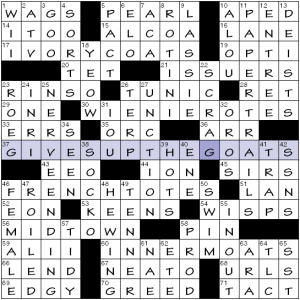 Phrases ending in –ST have that sound transposed to –TS, to wacky effect. In some cases, homophonic spelling adjustments are made.

Theme entries are familiar phrases whose first words sound like letters of the alphabet. Collectively, these “letters” spell out “LGBTQ.” 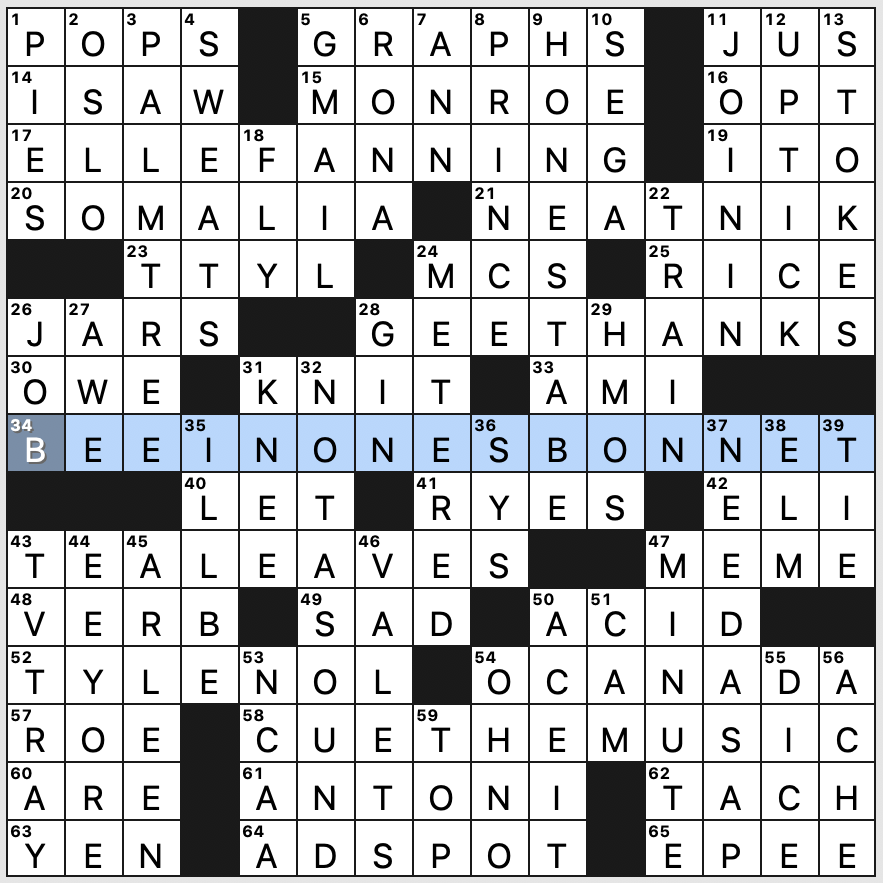 Given the title, I was expecting a listing of historical events, so the actual theme turned out to be a little bit of a surprise. I’ll be honest, once I caught on to it, it felt a little light, but it’s kinda cool that each of the letters has a word homophone. I suppose the theme could even be extended with EYE CHART and ET VOILÀ, or something similar.

Cute theme and clean grid. Strong fill all around. 3.7 stars.