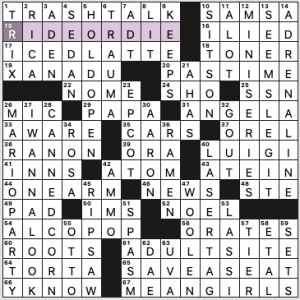 Sophia’s one of those bright, new faces in Themelessland, and there’s plenty of fun stuff in this puzzle. That top stack! RIDE OR DIE sandwiched between TRASH TALK and an ICED LATTE, with a dash of Olivia Newton-John (you don’t fool me with that [Literary utopia] clue for XANADU). That bottom stack, with the great SAVE A SEAT between an ADULT SITE and MEAN GIRLS. And then the other two corners have stacked 10s; SEEMS LEGIT.

Clue angles I don’t think we would have seen in an NYT crossword just a few short years ago: 18a. [Sephora product], TONER, to refresh and tone your skin, of course. 49a. [Tampon alternative], PAD. I’d love to be compensated for all the years of OTT by a similar quantity of unashamed-of-menstruation clues. 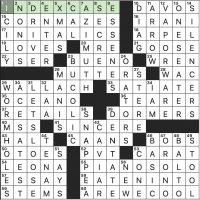 My work has been hectic the last couple of weeks, so I feel literally stupider as I solve. So either that was the case, or this was a tad thornier than normal. But I will take a time of 7 1/2 minutes, considering the background info I just told you! Haven’t seen a puzzle by Pawel in awhile, so it is nice to see his byline again. I enjoyed this solve, even if there were just a couple of thorny spots. I solved a lot of this while watching some of the US Track & Field Championships that just started; it should be an interesting week for sure. 4.5 stars for the puzzle, though!

Going to try and find some time to do some puzzles later today, but its a busy day for us! (Who am I kidding? Of COURSE I will do more puzzles later!) 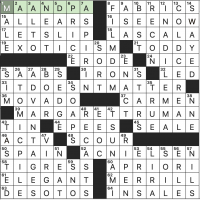 I thought the Anna Stiga surname (“Stan Again!”) were slightly easier? Or, maybe I am just losing my mind after a busy day at work? The lower half was easier; I finished in the NE and then lastly the NW corner. This was solved over a couple of sessions (I paused the timer!), so some entries pop out to you after looking at something else, so that was surely the case here. But kudos to Stan for a wide-open grid with nothing too difficult in here, just tough clues! 4.6 stars.

Some stuff I enjoyed: 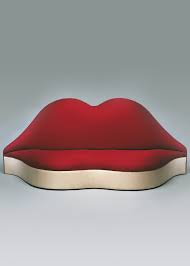 Totally forgot that today was going to be a themeless (as it will be next week, I’m sure). So still a pleasant surprise for the 3rd week in a row. 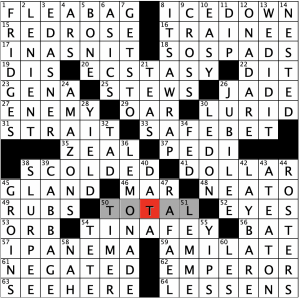 Got myself in a fun jam in the SE corner. Had TOTEM for 50A [Lowest number?], which makes no sense. OVERATE instead of ATE A TON, TOO LATE? instead of AM I LATE? and YAPS instead of YIPS. Really slowed down there, but it was a delightful untangle. 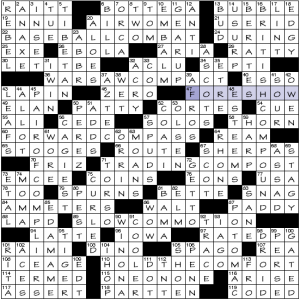 Not too much of a poser here. Simply drop in the trigram COM to alter the meanings of common phrases.

A solid but to my mind not an especially compelling theme.