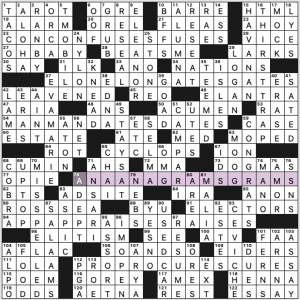 The theme takes a word, splits it into two words, wraps it in its own components, and clues the resulting confusion as a plausible sentence:

Fairly solid theme. What’s the funniest such phrase you can create?

Noticed a smattering of crusty fill in the mix—NEBS, OREL for the second day in a row (Russian city yesterday, Hershiser today), ESTES, old REO, NEBS, … and did I mention NEBS? If NEBS was new to you, know that this is old crosswordese, meaning [Birds’ bills] or beaks. 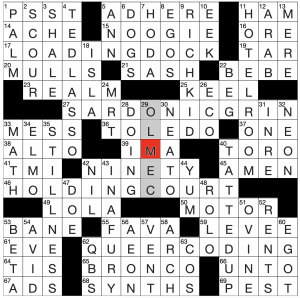 THEME: The word CODING can be found scrambled in common phrases.

QUEER CODING is a new term for me. It refers to a viewer’s perceptions of a character as portrayed in media. I’m rather impressed that the word CODING can be found mixed in this many phrases. I wonder how many more our constructor found before settling on these.

I appreciate the lack of circles (and therefore lack of confusing directions to count letters in the widely published version, which I can’t seem to find online today…) I much prefer this over the circle “workaround.” It’s a better AHA moment too, finding the hidden word without the nudge.

I got held up on SARDONIC GRIN and nearly needed every cross there (the unfamiliar-to-me TED LASSO wasn’t helping, nor was OLMEC :) I really, really wanted the entry for [Wide, mocking smile] to be SHIT-EATING GRIN. That’s what I know it as.

I grokked the theme with the first entry and struggled to parse two of them because, apparently, I am not fully awake. 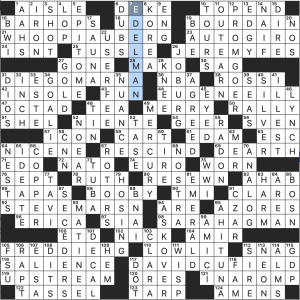 IRON, SILVER, GOLD, TIN, MERCURY, COPPER, RADON and NEON all appear in the grid, which is how I went back to the grid and figured out 31- and 44-a. I like the theme. All the theme answers are solid and consistent. I don’t understand why all the clues cite awards of some kind except for Eugene O’Neill. He was awarded a posthumous Tony and a posthumous Pulitzer. Oh, yeah, there was also the Nobel Prize for Literature. I wonder if David and/or Rich considered the Nobel too obscure for a clue? Whatever the reason, it makes the clue set very odd and inconsistent and it annoys me.

What I didn’t know before I did this puzzle: that Julian EDELMAN was the Super Bowl LVII MVP.

A little PSA before getting into the puzzle: If you solve in Across Lite, there is an update here. While this may or may not affect the solve experience for some users today, it definitely helped on the latest version of my Mac, which was not playing nice with the older version. The lag that I’ve been dealing with for quite some time is now entirely gone.

Also, here’s a slightly edited note I received from Evan, so if you were experiencing a problem during your solve (or if you haven’t solved it yet), this may solve it:

The .puz file that’s going up at Fiend is a trimmed-down version that doesn’t have all clues rendered as I originally intended them. That’s because there isn’t one .puz version available that can be supported in all solving programs. HOWEVER, we are going to make the .puz files available. The URLs are in the Notepad in the .puz file at Fiend. They should be at these locations:

THEME: Entries that are “clueless” are aptly hinted at elsewhere. 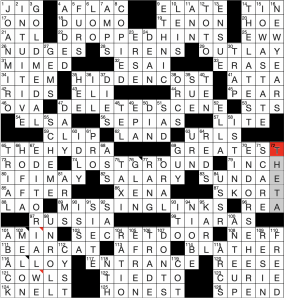 And as if the curveball in the puzzle wasn’t excellent enough, there’s one more Birnholzian layer: The first letters to the unclued entries spell out NO CLUE in this 20×21 left/right symmetry puzzle.Awesome.

I hadn’t noticed something truly unique about this puzzle until it was pointed out to me. Typically, Across Lite solvers would see a dash or a period or something in place of a “blank clue.” Here, assuming you’re solving the correct version of the puzzle with the correct software, the clue is legitimately blank. That’s because it appears that Across Lite is now able to read unicode symbols (if I’m reading between the lines correctly, Alex Boisvert figured this out). And there is a unicode symbol that will result in a clue being “blank”: Â

You’ll also notice that the clue for 72D features an actual theta.

Anyway, I flew out of the gates at the onset (or so I thought… had AETNA instead of AFLAC which was tough to erase), but I was quickly slowed down. It seemed the further south I got, the more challenging it became. Blank clues can be dangerous to play with since the solver has to rely more on the crosses, and that’s where I often got hung up, but there is a synergy in this theme type (for instance, MISSING LINKS helped me uncover URLS) that I very much enjoy. At the end of the day, Mr. Happy Pencil popped up, so it’s tough to complain about it being… tough. I mean, a puzzle, by nature, should be puzzling (and solvable), right? Well, this one was.

Toughest area by far for me was the SW. I could not for the life of me see EDITORIAL WE, which was crossing Adam AMIN, a name with which I am unfamiliar. Seen COWLS in crosswords a bunch, but couldn’t cull it forward. So I futzed around there for quite a while before it clicked.

Loved the clue for XENA: [TV character who once said to Ares, “You’re soft, like all the Olympians”].

Stuff I faltered with: DUOMO, the spelling of EWW (I never know how it’s going to be spelled), OUTLAY (not a word I’m all that familiar with), ATTA (finally clued differently rather than [Lead in to “girl”]  or something), PEAR (as clued), the spelling of MIRO in JOAN MIRO‘s name, TENON, DEAN (as clued… I filled in DEAD!), SUE Monk Kidd, Andy DALY, GLEN Weldon, and EFREN Ramirez. Also, wtf is a zonkey and where can I get one?

The revealer is STARTLING REVELATION (113a, [*Dramatic disclosure, and what the starred answers’ first words amount to?]). Each starting word of the theme answers builds upon the previous one by adding one letter until the word STARTLING is fully revealed. 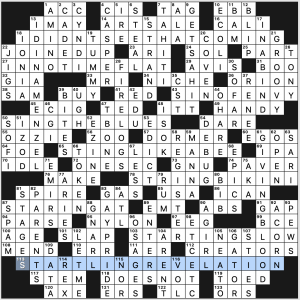 I guess that’s pretty cool. I certainly wasn’t expecting it. I wonder how common it is to be able to do this with your average nine-letter word. My gut feeling is that it’s probably not that common. So to be able to do this and still find interesting phrases that can be placed symmetrically is an impressive feat of construction. So if an entry or two are not quite up to par, well, that can be forgiven.

Some sparkle in the long fill: IDINA MENZEL, GIVING BLOOD, GAY PRIDE, FIRELOGS, and PARENTS—speaking of which, Happy Fathers’ Day to those celebrating today.