This is a cute theme with a revealer that seems to kind of miss the mark. Each theme answer has the same structure. 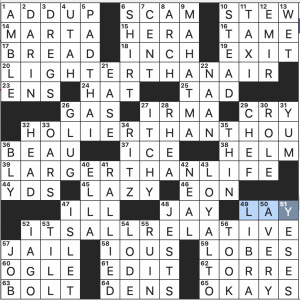 The revealer is 52a [“Let’s put things in perspective”…or a title for this puzzle] – IT‘S ALL RELATIVE. Maybe it’s just me; this doesn’t seem quite right. I know comparisons are relative….I guess it works.

What I recently learned that relates to this puzzle: Martin Luther King Jr’s “Letter From Birmingham JAIL” was written in response to “A Call For Unity,” an open letter published April 12, 1963 and signed by eight Birmingham clergy who called for local activists to negotiate and petition the courts for redress rather than participate in protests “directed and led in part by outsiders.” The same group previously published “An Appeal For Law and Order and Common Sense,” which tells you that some things have not changed in the intervening 58 years. 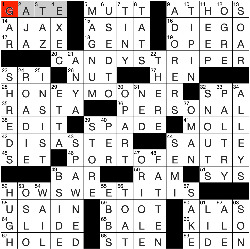 Looks like we have a debut in the house, and it’s a sugary one. The revealer at 52A [Jackie Gleason catchphrase … and a hint to the starts of 20-, 28-, and 46-Across] is HOW SWEET IT IS, and something sweet is indeed at the beginning of each of the theme entries:

I enjoyed seeing HUGH clued as the House star Hugh Laurie and OPERA with reference to La Scala (since the last night of my last trip abroad involved a performance of Verdi’s I Masnadieri there).

Despite my quibbles above with consistency issues in the theme, this is pretty darn good for a debut construction. I know I committed far worse sins in my debut back in 2002! 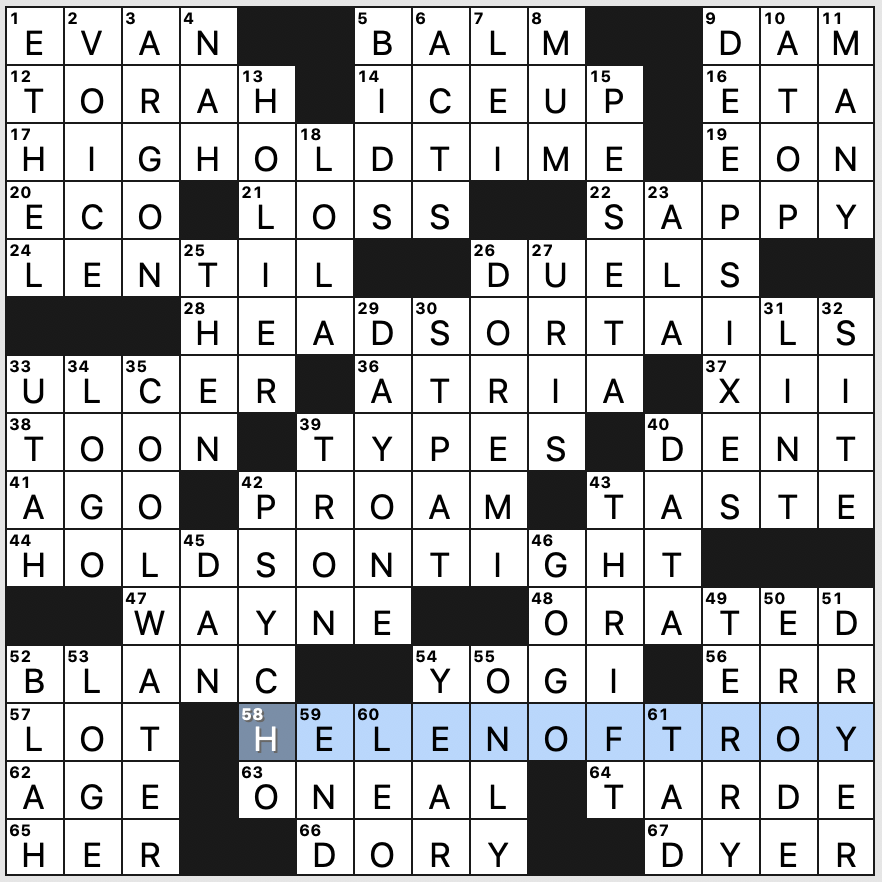 However, like the first theme answer, a lot of the fill feels aimed at solvers in the 60+ demographic. DEEP SIXES [Gets rid of, for good] is also some pretty old slang, but it does maintain enough currency to be fun.  COOL WATER [1948 hit for Vaughn Monroe] is probably unknown to anyone under 50, though I believe it was featured in the Coen Bros. The Ballad of Buster Scruggs. Oh yeah, here it is. More old timey slang: DO RE MI for money.

In the more modern era, there are references to Dear EVAN Hansen, The Connors, and TRON (if you want to call that modern). But the grid definitely feels skewed toward older solvers, with the likes of ETHEL Merman, PSYCHO, and GOGO dancing.

A straightforward grid with an easy-to-get theme. A broader range of clues would be welcome, though. 3.5 stars. 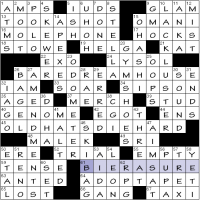 … and its theme is relevant to that subject.

Solid puzzle and theme. For what it’s worth, there are no occurrences of ‘BI’ in the grid, save for the revealer.

I found this one a bit harder than usual, possibly because my brain is a bit overwhelmed at the moment. 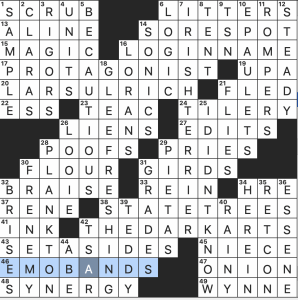 What I didn’t know before I did this puzzle: that LARS ULRICH was the first Dane inducted into the Rock and Roll Hall of Fame. 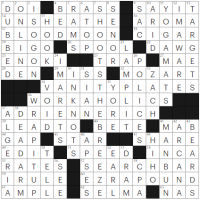 I’m writing this up on short notice a day after the fact, so there isn’t time to do justice to this chewy, challenging themeless.

The flow was good, the fill nice and varied, the cluing frequently oblique, and the obstacles  enough to make it a minor workout.

I kept thinking I was going to be stuck, but each time there was a toehold or fingergrip to get me just a bit farther, until the whole thing was complete. That’s how a crossword should work, as far as I’m concerned.