This week we’re told, The answer to this week’s contest crossword is a five-letter word. There are five long themers, each containing an odd compound word: 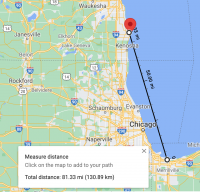 Step 1: each word contains city, but there is ambiguity, for example is it CALGARY or GARY? Racine (Wisconsin) helped me nail it down: Google Maps shows that it’s 81 miles from Gary, Indiana (across Lake Michigan). Protip: during my various map-related searches I discovered that you can right click-on Google maps, and choose “Measure Distance.” I was stuck on ROME (Italy) for a while, and then realized ROME (New York) is close to UTICA. I thumped along for awhile, and worked out four of the five city pairs, but BASELINEBONNET proved challenging. BASEL (Switzerland) and BONN (Germany) were the obvious pair, but they are 22o miles apart (as the crow flies), not 302.

So I punted and set the meta aside. I tried applying the title word “sail” the next morning. In hindsight: I made step one overly challenging by initially missing that fact that each of the four city pairs were connected by the same body of water (so you could “sail” between them). BASEL and BONN are connected by the Rhine, which does not flow in a straight line. My Googling didn’t reveal a site that measures the sailing distance between the two (I’m sure there’s one out there), but driving distance is about 300 miles. That reveals the five cities (and most of the corresponding bodies of water):

Now what? I tried to make 3-letter words from the O in ORAN and the N in NICE (mapping to 61a, “OWN”), but that approach fizzled out quickly. Also: UTICA and ROME seem to be connected by two bodies of water: a river and a canal. I figured the Erie Canal was more likely (since we already had the Rhine River). I put the meta down for an hour and went for a walk. Upon return: what if I made three letter entries from the bodies of water (and not the cities)? My “aha” moment came when that approached worked:

The middle letters spell WATER, our meta solution. Turns out I had the right idea (map to three-letter entries), but tried to apply it at the wrong step. The Erie Canal/Mohawk River ambiguity was resolved by the E.C entry (with none matching M.R).

Whew! That was a workout. This meta was a grinder, but I thought it was very fair. Each step flowed logically to the next, and the answer tied everything together (in fact, it does that so well that I predict a bunch of successful Hail Mary guesses). There was zero ambiguity once I completed all of the steps. Metas come in all shapes and sizes, and this one paid off for folks who were willing to roll up their sleeves and get to work. Al Green will now take us to the river, with a little help from some friends.