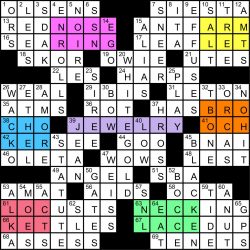 Hello everyone! First and foremost, hope you all are staying cool, and definitely hope those out in the West Coast are coping OK with the nasty heatwave that’s descended upon many of the states in the area.

Today’s grid breaks out the good JEWELRY, as each of the circles in the grid form a box, and the letters inside of them, when read from the top row to the row below it, end up spelling out some type of bling (39A: [___ boxes (places for valuables…and an alternate puzzle title)]).

Given the theme, love the WHITE GOLD entry right down the middle of the grid (20D: [Platinum substitute used in baubles and bangles]). The middle left section of the grid could have twisted some solvers in knots, especially since I looked at the clue for WACKO as an adjective and initially put in “wacky” (26D: [Screwball]). Had a feeling “YLETA” was not going to be the entry going across, so getting the “O” right in OLETA ended up not being too difficult (46A: [“Get Here” singer Adams]). Definitely one of the benefits of more people being outside safely is going to the parks, and can’t wait to come across Bryant Park once more to see people playing BOCCE (52D: [Game similar to lawn bowling]). I know there’s a pallina and eight other balls, but I can’t say I’m an expert in the game…far from it. Anyone out there play/have played some bocce and want to share their experiences?

“Sports will make you smarter” moment of the day: NO-HIT (34A: [Like some Nolan Ryan games]) – Not only does Nolan Ryan have a Major League-record seven no-hitters during his career, he also has an MLB record-tying 12 one-hitters. (Cleveland legend Bob Feller also had 12.) Speaking to his incredible longevity, Ryan’s first no-no came in 1973 as a member of the California Angels and his last no-hitter came in 1991, at 44 years old, as a member of the Texas Rangers. 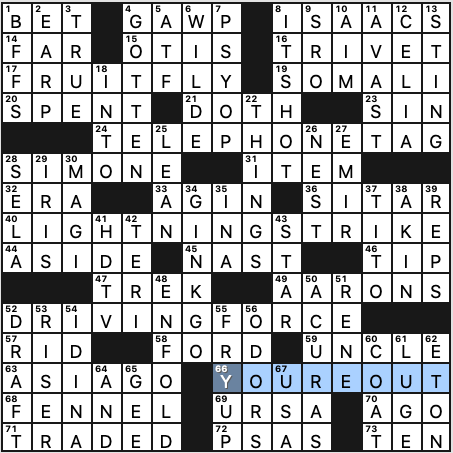 As you can see by my comments, for one who doesn’t follow baseball, this felt a little loose. But then I realized each of those words can precede “out,” i.e. fly out, tag out, strike out, and force out. That’s a much cleaner theme, and probably the constructor’s intent, even though it’s not spelled out (haha) in the revealer clue.

There are no long sparkly bits in the fill, but GINKGO is pretty crunchy and a good challenge if you’re not totally up on its spelling. The ASIAGO and FENNEL pairing make for a good stack, and IT’S HOT is apropos for a lot of Americans right about now. I also like FRY UP [Cook quickly, informally] which could also be a hyphenated noun to a Brit.

I had trouble with PSYOP [Military propaganda, for short] which is normally seen in its plural form “psyops.”

You don’t have to be a baseball fan to solve and appreciate this puzzle, but it helps. It took a little while for me to come around on the theme, and some sparkly (non-baseball) fill would have been welcome. 3.5 stars. 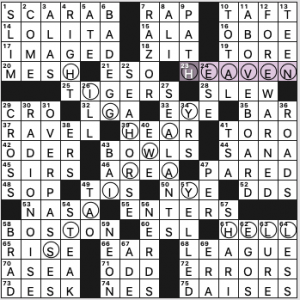 The theme pairing was familiar to me (Jeffrey Harris combined the two songs for a Crosswords With Friends puzzle), but the visual angle here was new. Led Zeppelin’s “STAIRWAY to HEAVEN” occupies part of this asymmetrical theme, with the stairway angled upward towards HEAVEN, and AC/DC’s “HIGHWAY to HELL” the other, with the HIGHWAY going straight (well, at a 45° angle) to HELL. These 8- and 7-letter diagonals intersect in the center, and 29d/36d spells out CROSS / ROADS. It’s cute, but it is really a stretch to consider a STAIRWAY a ROAD of any kind.

I do like that the number of theme squares is kept small, as jamming in more thematic material when there are triply checked squares in the diagonals would make for too much ungainly fill. Nice to see SCARAB, almost-thematic OVERPASSES, a SEAHORSE, ABOVEBOARD, and FOREWARNED in the mix. The fill is mostly pretty smooth (if a bit packed with 3s), though I don’t love the ODER river or the less common spelling SANA instead of Sanaʽa. And then there’s 43d. [Antioxidant juice brand], BAI, and I really wanted that BOWLS clue (43a. [Offerings from Pottery Barn and Chipotle]) to be a bit more obvious (I’ve never bought dishes from Pottery Barn and feel like Chipotle’s burritos are better known than their “bowls”), just because BAI is a big ask. I’ve seen the brand, yes, but that ain’t juice, honey, it’s artificially sweetened water drinks. FOWLS and La BREA crossing FBI is maybe worse overall, but would dodge the “figure out BAI” issue. 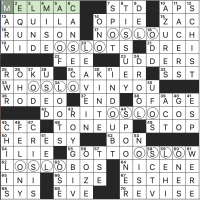 I didn’t read the title before solving. Perhaps I should have! The title gives you the best idea of what is going on with the theme. The circled letters all contain the letters OSLO:

Perhaps the addition of an entry of OSLO as an answer would simply be overkill. Also, in looking at the grid, where would you put it? This reminds of Bill Gates’ obsession with obtaining a Nobel Prize. I suppose if you’re that rich, you have to work towards something, don’t you? Especially if you have any type of ego, which I am sure he does? Not that that is a bad thing, but I doubt you could be that rich for long without acquiring one at the very least! But I digress: we are back to a typical Jonesin’ this week, with some fairly obscure trivia for you, or at least for me! But perhaps you will learn something! 4.4 stars this week.

The Ini Kamoze song is a little racy, so here is a safer earworm for you! 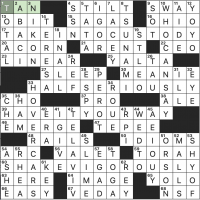 Two of my friends have teamed up for this Tuesday’s LAT puzzle! We have a revealer at 45D:

Nice job! Now it would be super-elegant to have each of the vowels including Y only appear once, but that is nitpicky. What IS happening is the six letters all appear in alphabetical order in each theme entry. This is hard enough to do without striving for this feature. There is a Facebook group called Supervocalics, which ARE words and phrases that feature all five vowels just once, but very few of those have the vowels in order, and to find enough to fill an entertaining puzzle might not be possible. They even got the revealer to span two theme entries! Does that silence the nitpickers out there? Great! 4.5 stars from me.

*This puzzle is part of Universal’s Pride Month Series*

Joke’s on me. For the first time, I absolutely cannot complain about Universal’s inability to include circles in its grid. And this puzzle is teeming with absent circles.

THEME: Circled letters (and what they stand for) 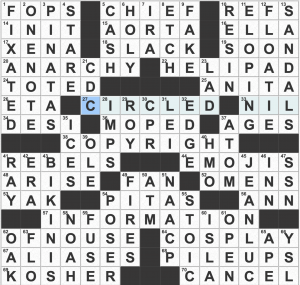 This puzzle nailed it. From the concept, to the grid design (Left/Right symmetry to accommodate all that theme!), to the fill, to the cluing. This was really fantastic.

A sign of a really good puzzle, and a likely memorable one, is when the theme can’t really be replicated using a new set of entries. I can’t think of anything else this could really include as far as circled letters go. And while I don’t think of a circled X as meaning CANCEL, it doesn’t strike me as far fetched or over-reaching. Just something that is likely over my head at the moment that I’ll probably come across later today (haha or right now as I hover my mouse in the corner of my screen and see a circled red X if I wanted to close out this tab).

COSPLAY! OF NO USE! ONE NOTE! FLOATIE!

There’s literally nothing about this puzzle I didn’t like.

And, of course, my favorite feature being the (unintentional?) nod to this publication’s lack of circles in its grids.