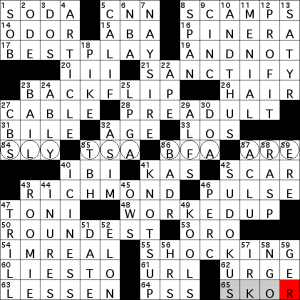 hello and welcome to episode #681 of matt gaffney’s weekly crossword contest, “Crazy Eights”. for this week 3 puzzle, the instructions tells us that This week’s contest answer is a four-letter word that’s encoded somewhere in the grid. okay. what are the theme answers? well, i’m once again blogging a meta i haven’t solved, so i’m guessing here, but my suspicion is that the eight 8-letter across entries are relevant, both because of the title and because they are actually the longest entries in the grid. those answers are:

in addition, there are four circled entries, all three letters long, across the central row:

the fact that there are four such entries certainly suggests that each one encodes one letter of our four-letter meta answer. but how? and how do they relate to the eight-letter answers? i’m still working that out.

“crazy” suggests anagramming, at least in a cryptic crossword sense, so perhaps that’s what we should be doing, but the only one of these with even one decent anagram is ROUNDEST, which anagrams to UNSORTED and TONSURED. so that’s probably not it.

BFA, the most arbitrary of the circled three-letter answers, are three of the eight letters in BACKFLIP. that was mildly interesting to me, and you can also find the letters of TSA in both BEST PLAY and SANCTIFY and the letters of ARE in PRE-ADULT, but there’s no such luck with SLY. so that’s not it.

what does “encoded” somewhere in the grid suggest? perhaps we need to use some kind of cipher, like morse or semaphore or something. or even binary—you can turn eight bits into a byte, and thence to a character in ASCII. okay, this is definitely interesting. for any given letter, you can check whether it appears in each of the eight theme entries in turn. (the fact that all eight of them are isograms—no repeated letters—is a mild confirmation that this line of thinking might be relevant.) you can assign a 1 for yes and a 0 for no to build a sequence of bits that can be interpreted as a byte.

for example, S appears in BEST PLAY, SANCTIFY, ROUNDEST, and SHOCKING, but not in BACKFLIP, PRE-ADULT, RICHMOND, or WORKED UP. so this would correspond to 11000011, which … okay, here’s where it breaks down, since all of the alphanumeric characters (and standard punctuation) in ASCII start with a 0, not a 1. so that might not be it.

in fact, almost all of the letters in SLY, TSA, BFA, and ARE are in BEST PLAY; only F and R are missing. that does suggest something, although what that something is, i don’t know. not ASCII, i guess.

what else is there? the fact that we have 8 theme entries of 8 letters each means we could lay them out in an 8×8 grid, which is the same size as a chessboard (and we know how much matt likes chess):

but of the many, many things you could do with a chessboard, none of them are suggested by anything in the puzzle. it doesn’t mean this 8×8 grid idea is wrong, but there’s no aha here yet.

the circled entries themselves are, i suspect, quite specifically constrained, based on how much crud surrounds them in the fill: awkward entries like IBI, KAS, BADR, AS I’M, and ALFS, all in that middle section nestled between the circled squares and the eight-letter theme answers. BFA in particular is in a very clunky patch of grid.

all right, as much as it pains me to miss two weeks in a row, i have to once again admit defeat, because i have nothing, and i can’t escape the nagging feeling that maybe i never even got close to the right idea. oh well. those of you who did get this one, my hat’s off to you and i hope to hear from you in the comments.