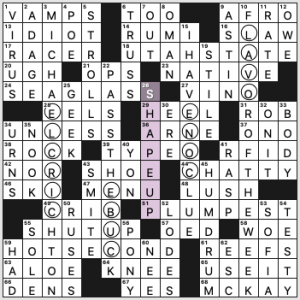 This theme is solid. No, wait, one of the shapes is 2-D rather than 3-D, so the theme is good. The revealer is 26d. [“Get it together!” … or a hint to the highlighted letters]. “SHAPE UP!” and the four longest Downs contain the names of shapes spelled upwards in the circled/shaded squares:

Fave fill: SEAGLASS, PLUMPEST clued via peaches (it’s not yet peach season in the Midwest but the South is cranking ’em out), HUMDRUM.

Theme: A food fight is imagined by replacing words in familiar phrases with their food homophones. 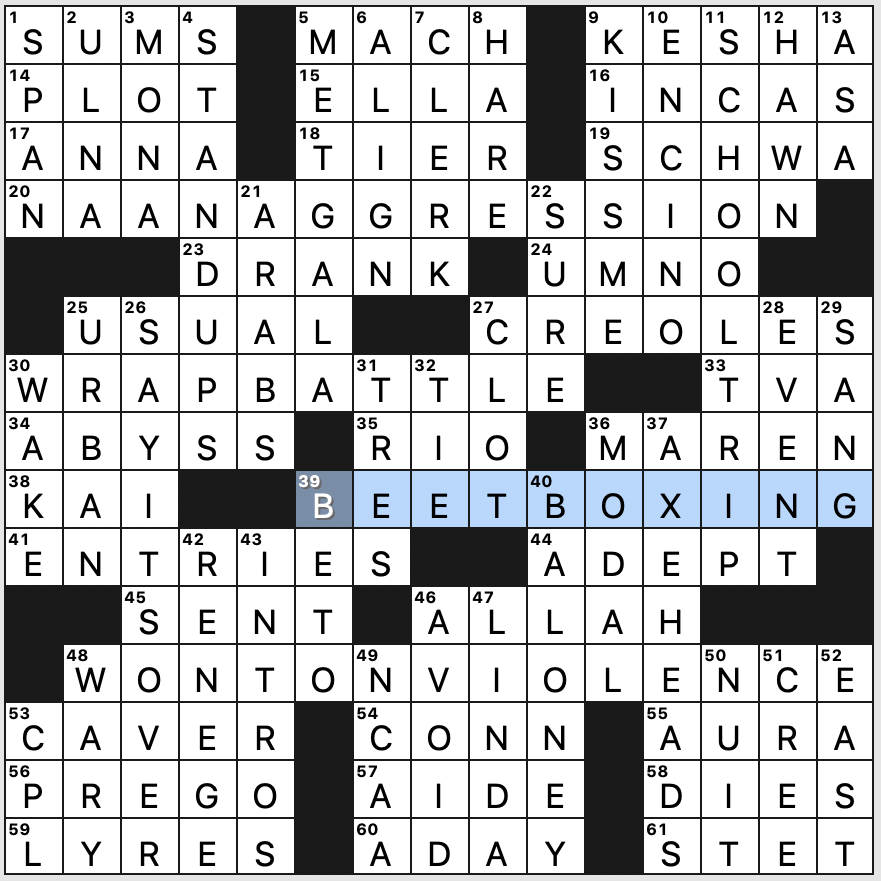 Cute. I enjoy a good pun, and these felt rather fresh. Tying everything together in an imaginative scenario is a big plus, too.

I struggled in the greater SE area since both BALONEY or AXE HEADS had opaque clues, and MODAL and MAREN were new to me. Finally getting ALLAH helped put things in their proper place.

I gotta run. I hope your Wednesday is going swimmingly. 3.75 stars. 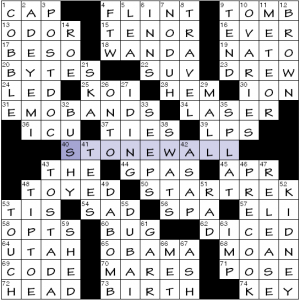 … and its theme is relevant to that subject. 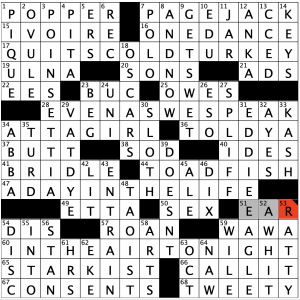 Byron Walden’s got today’s AVCX, and rather than circling or shading anything in the grid, the revealer at 66A points out that it applies to “the four longest grid entries”.  Let’s take a look at those, first:

The rest of 66A asks for a “Phrase for which the “heads” of the four longest grid entries can all be “tails””, which turns out to be CALL IT — CALL IT QUITS, CALL IT EVEN, CALL IT A DAY, and CALL IT IN THE AIR. 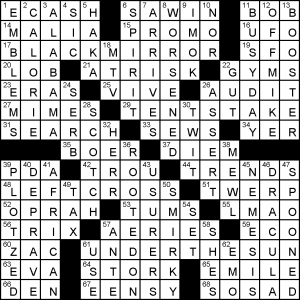 Today’s puzzle celebrates the legendary DRACULA and his aversion to (BLACK)MIRRORs, (TENT)STAKEs, (LEFT)CROSSes and (UNDER)THESUN, but not garlic because there aren’t many phrases with garlic in them… The article in the last entry is an excellent grace note.

ECASH is something of a dud 1A answer… Not sure it’s even real. I had no idea TRIX was colourful, I thought those were Froot Loops? Who can resist the word PLOTZED though?

The BUSYDAY ([Reason to skip lunch, maybe] – I call that a day around here; I’ve long since stopped packing lunch or imagining things like coffee breaks exist), OFFMIKE, BOOSTER section was my favourite. I must say the clue for BOOSTER seemed off, the seat or the vaccination seem much more legit clueing angles than an [enthusiastic supporter]?

There’s nothing like a Patrick Berry crossword. It doesn’t matter what the difficulty level is – they’re all smooth and solid and fun to solve. This was a lovely way to end my day, especially sitting out on my porch in delightfully cool and non-humid weather. 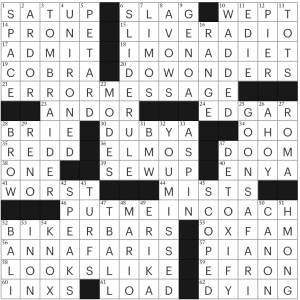 What I didn’t know before I did this puzzle: that there’s a documentary about “Troll Movie 2” called “Best WORST Movie.” Now I’m curious.