The theme of this puzzle is “make up a sentence composed of two-letter words and create a grid around it.” I knew that before I downloaded the puzzle, because this appears in the Email: The clue for 14-Across is quite long, so for those solving in Across Lite, it’s pasted here. [With 24-, 41-, and 54-Across, resigned declaration about whether you and another person had any preference between slaying one yoked animal over hatcheting your father (who hasn’t yet divorced your mother) during his scheduled time for walking past you both [with this enumeration: 2 2 2 2 2 2, 2 2 2 (2 2 2 2 2) 2 2 2 2 2 2 2, 2 2 2!] ] 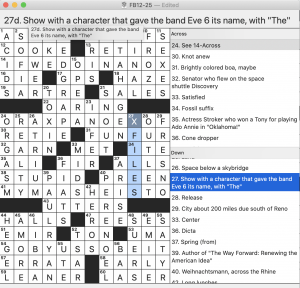 There you have it. And there you can leave it, as far as I’m concerned. I’m not a big fan of stunt puzzles. I want my puzzles to have either amusing wordplay or a high level of difficulty or both. This one has neither. I’m sure someone out there enjoyed it, and it certainly takes the Patented Peter Gordon Very Long Clue to another level. I tried to think of a two-letter word to sum up my opinion, but I needed three: meh.

What I didn’t know before I did this puzzle: that the band Eve 6 got its name from The X–FILES.

Theme: The trigram OFF is dropped into the vertical direction from familiar phrases. 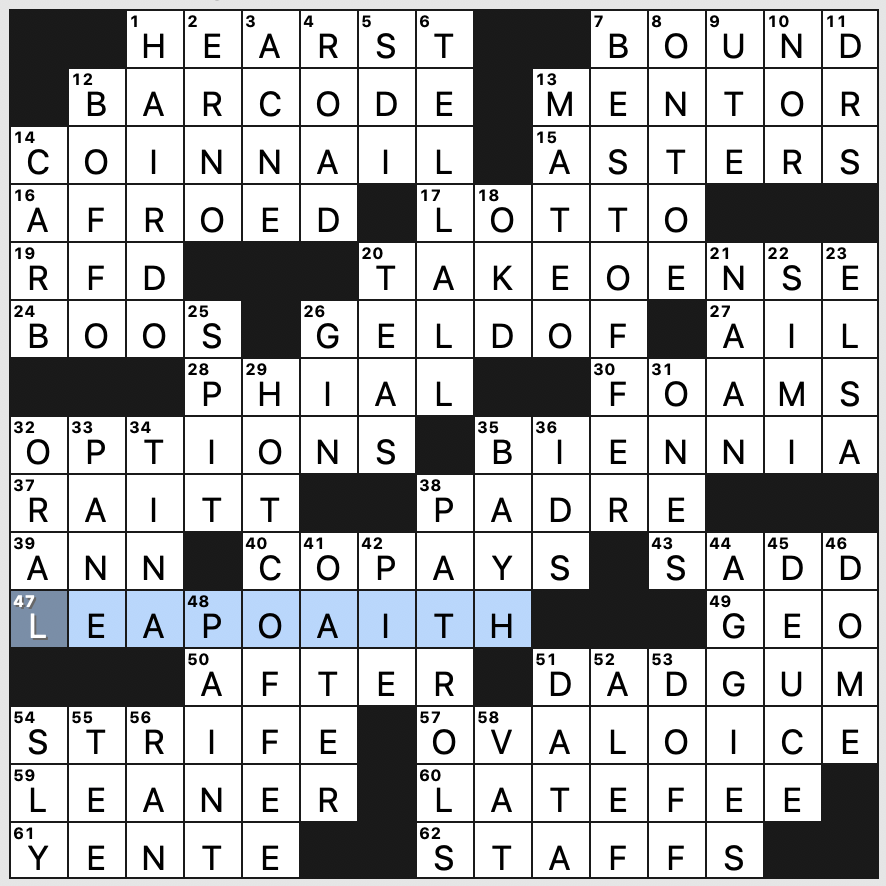 Solid theme. Even most of the crossing entries are good.  But it’s not exactly original, and I’m starting to get jaded with themes like this, especially when they leave nonsense entries in the grid like LEAPOAITH.

Other turnoffs: BIENNIA which I can’t imagine anyone ever using, and stale crosswordese OATER, ERNO, RFD, and SDI. How many solvers know the name BAYH [Big name in Indiana politics]? I only know it because I went to college in Indiana and a girl I know worked for Evan BAYH’s campaign.

I do like BARCODE, DADGUM, LATE FEE, and TELL-ALL.

The theme works and there’s some good fill, but also a number of distracting minuses. 3.4 stars. 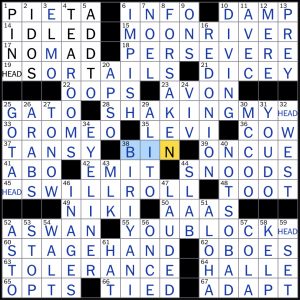 It’s Thursday, so rebus squares are fair game, and this has plenty of those under the hood:

All in all, it’s a nice debut.  There’s some cluing in here that felt weirdly obscure, even for a Thursday — cluing LEVI with Levi Eshkol, third prime minister of Israel — and other parts that felt weirdly out of time (I love The Fifth Dimension, but I don’t see Marilyn MCCOO clued too often these days), but that’s all a little nitpicky.

Still, it’s nice to learn something from the puzzle, and it turns out that Michaelangelo’s PIETA is his only signed work. Who knew? I also learned that KELP holds itself up with gas-filled bladders, and that felt neat.

Each theme answer has the word IS removed from a three-word phrase – sort of. The S remains attached to the first word. 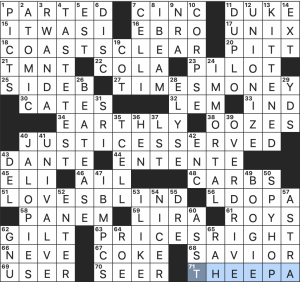 What I didn’t know before I did this puzzle: never heard of either ELYSE Sewell or ELYSE Knowles. 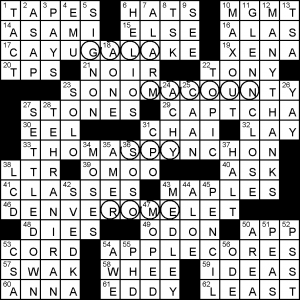 I can’t argue with today’s concept, though it is a familiar one. Members of a set are hidden between parts of four theme phrases. The circles didn’t make too much sense to me initially. I did drop SONOMAVALLEY in initially, but even once correctly MACOUN didn’t mean anything to me. SPY emerged, but also didn’t seem related. The revealer made everything a little clearer: APPLECORES. I found it hard to accept that a SPY is an Apple but Google confirmed, as it did for MACOUN. I hadn’t heard of 50% of the theme, but I expect you have different Apple varietals than us so. Also, Alex Bajcz, PhD is a plant ecologist and I’m pretty sure his pet subject is fruit. Write what you know!

About half of South Africa’s apple crop is grown one valley east of us; I wonder which varieties are grown there? One of the themers, GALA, is number one, but the others are too wordy to be useful thematically, except perhaps FUJI, but its UJ digram is awkward.

Pretty smooth design choice to include paired double tens GLENNCLOSE/MANYTHANKS and SETTLEDOWN/TEHRANIRAN across two theme answers. There are compromises, but given the crowded theme and awkward themer counts, I’d say within reason.

Clue of the day: [Modern test of humanity] for CAPTCHA

**This appears to be a debut for Hannah Pucker. Congrats! 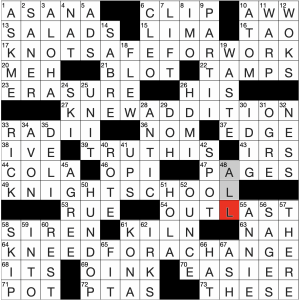 A familiar theme today, but fun answers nonetheless. Probably the most bizarre of the themers is KNEED FOR A CHANGE– I like that level of “out there.” That’s juxtasposed with KNIGHT SCHOOL, which is very vanilla in comparison.

HUNDO P is entirely knew… erm… new to me. According to this blog, it was essential 2017 slang. That’s the only year in the past 15 I wasn’t teaching in the classroom. Maybe I missed that fad. Seems like a fun phrase on the outset that would get on my nerves after my third time hearing it.

I was surprised to find the word count higher than normal at 80. I wonder why.

Good time overall- thanks for this!