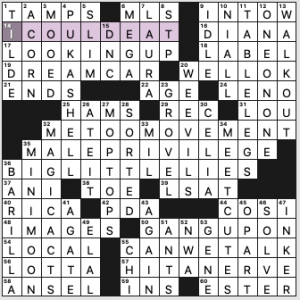 I enjoyed the heck out of this constructor’s prior themeless (Jan 2020) and I relished this one, too. “I COULD EAT” is definitely in my vernacular. DREAM CAR  is clued as [What you’d love to own and drive], but my mind goes straight to Barbie. That center stagger-stack is incredible–the “ME TOO” MOVEMENT, MALE PRIVILEGE, and BIG LITTLE LIES with lots of long Downs crossing them. LOOKING UP and GANG UP ON are both good, I think good enough that I can accept the UP dupe. “CAN WE TALK” and HIT A NERVE, also great. PUKA SHELL, GROVEL, MEET-CUTES, BARILLA dried pasta, and a WALKOUT are other highlights. The dullest entry is ESTER, but I forgive it because there is so much great stuff in this grid.

This appears to be a debut, and it’s an enjoyable one. 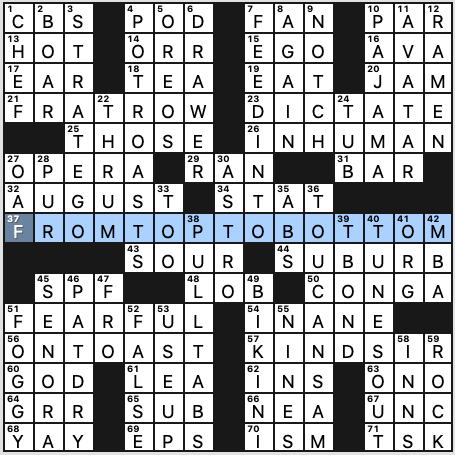 Nice! That was fun. When I got to the revealer and grokked the top half, I wondered if there were enough interesting phrases that incorporate “bottom.” Turned out I had nothing to worry about. These were all familiar and fun phrases for me to uncover.

It was just a little bit distracting that there were some Down answers that were longer than the theme answers, but since they’re not starred, it’s clear they’re not part of the theme. And for the most part, they’re wonderful: STRATEGO, POT ROASTS, PULL TABS, TOUCAN SAM, and TUNES OUT. I’m not a fan of preposition-ended phrases in general, but FEED INTO isn’t so bad as others. And in the Across direction, the highlights are FRAT ROW and KIND SIR, which I love since it can be said straight, as clued [Target of formal gratitude], or with an air of sarcasm.

There are a lot of three-letter entries in this grid; I counted 36, far more than standard cap of 20. But they don’t feel clunky, and I barely noticed during the solve. In fact, the fill feels surprisingly clean and lively with those fun long answers. This felt like a grid made by a seasoned pro, not by a debut constructor. Well done.

I enjoyed this grid quite a bit—both theme and fill. Four stars.

**nb: I composed this in error, as Friday is Jim P’s day to write about the Universal crossword**

The revealer—which is a fine 15-letter entry on its own—doesn’t exactly fit the theme, so the clue has to do some extra work finessing the affair. I bet there was a lot of editorial discussion about that.

I confess to tripping over 10d [Type of pants for bedtime] PAJAMA because it strongly suggested PAJAMA {BOTTOM(s)} but it originated in the TOP row, so it was all very disorienting.

I guess the price of the unusual theme format is that the first and last three rows each consist entirely of four three-letter words, which is less than ideal for a smooth-flowing grid.

So, an interesting theme weakened by a too-staccato grid. There are 34 three-letter words by my count! 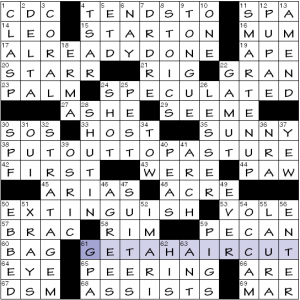 The theme for this one is re-parsing more literally words with different negating prefixes.

I like this theme; it’s a simple yet clever concept that lends itself well to a cruciverbal format.

Interesting theme, and there was a palpable, but not intrusive, effort to provide innovative clues for many entries, not just the few I chose to highlight in that way. Fun crossword. 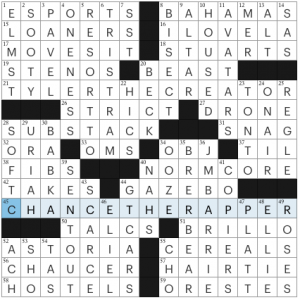 I love the mini-theme of “{name} the {noun}” Grammy winners TYLER, THE CREATOR and CHANCE THE RAPPER. Chance is a Chicagoan and a good citizen, doing some local philanthropy in his community.

Other highlights in the grid: E-SPORTS, SUBSTACK (the online newsletter company has been discussed so much this year, but if you’re not online much, you may have missed it), NORMCORE (this is my aesthetic), CHAUCER, HAIR TIE, BABKA, and J.M. BARRIE.

Not so keen on dated STENOS; weird plurals HICS OMS MAHS TALCS; airline SAS; wildly clunky (to my ear) GT CARS; and ELM ST. ELIEL is known to many of us almost exclusively through crosswords, but he’s salvaged a bit by the anagram cross-reference with ELLIE.