So many crossword announcements today! 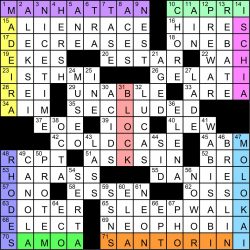 Hello everyone! Just like that, half of 2021 is over! More importantly, hoping all are doing well and keeping as cool as possible, especially those reading who are in the Pacific Northwest!

I am sure that many of you would not mind taking an island vacation, and today’s grid gives you a list of wonderful getaway spots to head to. As a matter-of-fact, all of the entries that make up the edges of the grid are all names of actual islands — though are not clued in reference to geography — and the BLOCK entry acts as the reveal (31D: [___ Island (New England vacation spot and a visual hint re the eight answers on this puzzle’s edge]).

Doubt that SECLUDED was part of the theme, but definitely an added bonus in the grid given the direction the puzzle went (35A: [Out-of-the-way, as a vacation spot]). Can’t say that I’ve ever gone to a location that could be described as such, but hope to do so one day and have fun taking that trip. Any out-of-the-way suggestions?

The concept of the theme allowed for stacked nines — along with other vertically-stacked long entries —  in the northwest and southeast, with WABI-SABI (41D: [Asian concept that finds beauty in imperfection]) definitely being a highlight, even if its crossing with LEW being a possible spot of bother (40A: [“Ben-Hur” author Wallace]). A nod to a journalism legend, Jimmy BRESLIN, brought a NYC flair to the grid, which is never bad for this New Yorker (46D: [Tough-talking newspaper columnist Jimmy ___]).

“Sports will make you smarter” moment of the day: ACES (8D: [High cards]) – Though the Las Vegas Aces play in the latest city to host a WNBA team, they are one of the founding members of the league. Of the eight teams that were in the inaugural season of the WNBA in 1997, one of the squads was the Utah Starzz (the double “z” mimicking the NBA team’s nickname, Utah Jazz, and the name mimicking the former ABA team, Utah Stars). In 2002, the team moved to San Antonio to become the San Antonio Silver Stars, with the nickname shortened to “Stars” in 2014. In 2018, the team moved to Las Vegas and is now one of the league’s best, finishing as league runner-up last season to the Seattle Storm.

I am traveling today and didn’t bring my laptop charger, so this will be a brief recap. 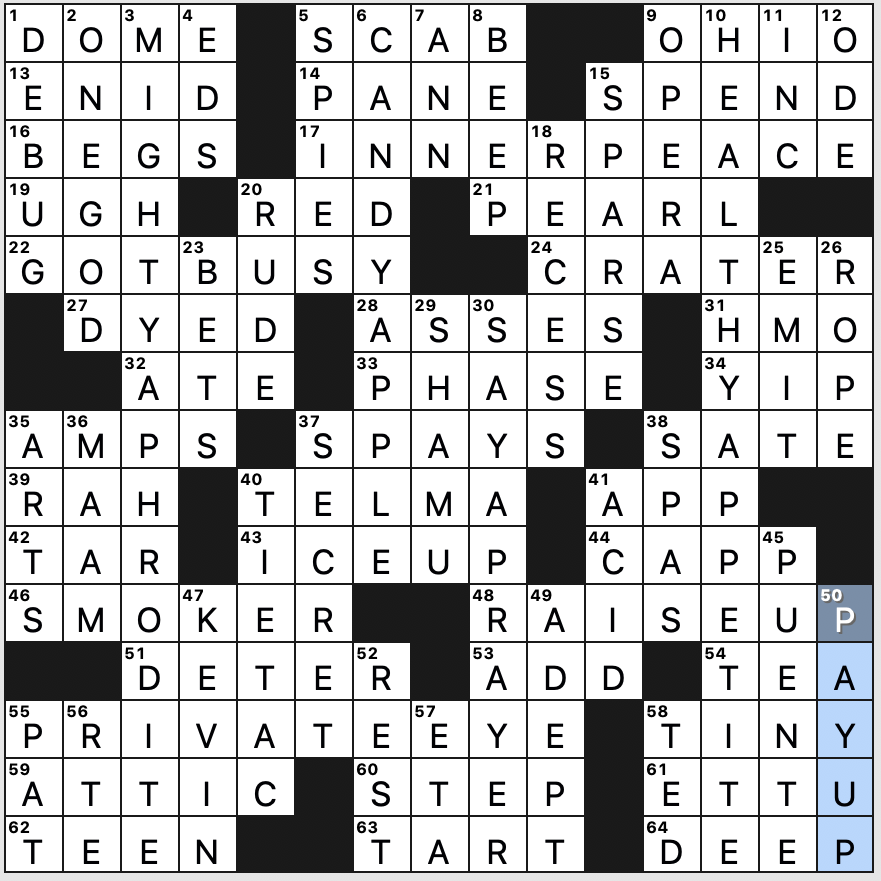 Hidden words aren’t particularly thrilling when it’s the same word in all theme answers and the word is only three letters long. That said, I do like all these theme answers for their liveliness.

Top fill: INNER PEACE, GOT BUSY, PRIVATE EYE (with the good clue [Spade or Hammer]). Did not know TELMA Hopkins of Gimme a Break! 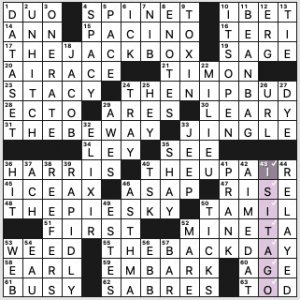 A plea to constructors: Please don’t jam six theme entries into a 15×15 grid unless you’re, say, Patrick Berry or Lynn Lempel. It’s too much, and it doesn’t let the surrounding fill breathe. There is so much stuff in this puzzle that’s wildly out of place in a Tuesday puzzle (heck, the theme is too hard for a Tuesday, too). My solving time was way out of whack for a Tuesday.

The theme is “X in the Y” phrases presented by putting the “X” word between “THE” and the “Y” word, so it visually represents the “in.”

I do like the entry JINGLE, but wasn’t finding a whole lot to like in this grid. Didn’t care for IS IT A GO (though it Googles okay), ENOTES, ONE RATE (beg pardon? 3d. [A fixed fee]?), ECTO-, LEY, ESTES Park, or SHAY (35d. Two-wheeled carriage]). And in a Tuesday puzzle!! That’s just wrong. I wouldn’t like the fill better on a Wednesday, but at least the folks who are new to puzzles might not be scared away.

Another celebration of bisexuality today!

THEME: Phrases that have both “BI” and “IB” in theme. 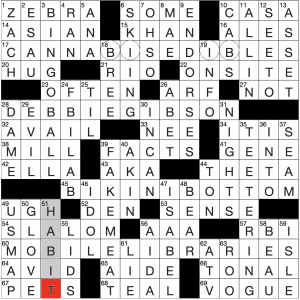 Nice finds! Especially enjoyed CANNABIS EDIBLES (not literally… I’ve never tried one. It’s on my list of things to do). And who doesn’t love a DEBBIE GIBSON throwback? I saw her as Belle in Beauty and the Beast on Broadway a very long time ago. She was going by “Deborah” then. Wonder what she’s up to these days…

BIKINI BOTTOM is a bit of an outlier as the backwards BI bridges the phrase, but I hadn’t even noticed that until typing it out. Looks fine in the grid.

I do appreciate that the BI/IB pairs weren’t circled in every themer. That would be awfully boring. And I’ll skip my (longer) rant about Universal’s inability to publish circles in its grids today. I don’t think this puzzle suffers from pitfall that like they often do.

Fairly standard non-flashy fill. BREE Newsome is new to me. As is ISABEL Allende. I’m not all that familiar with BEAR culture, but I’ve heard of it in passing. And hey, it’s a culture with a flag. Let’s look that one up. Guaranteed it’s gonna be a good one. Sure is! Diggin’ those earth tones. 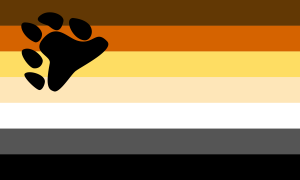 *This appears to be a debut for David Gold. Congrats! 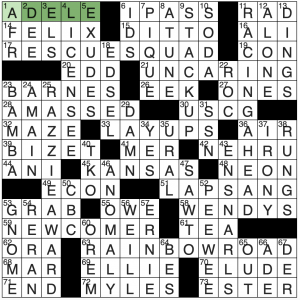 Yes, “pretty cool” indeed! The revealer is at the top at 11A, so it is fairly clear what is going on rather early in the solve:

Nicely done. All the themers are surrounded by the letters RAD. This was hip slang back when I was in high school – many millennia ago… Some interesting theme entries here, and I see no obscure trivia this week, so all of this made for a smooth solve. I will have to look up who won Razzies this past year, or if it was called off due to COVID! 4.3 stars today.

Another Jonesin’ comin’ next week! 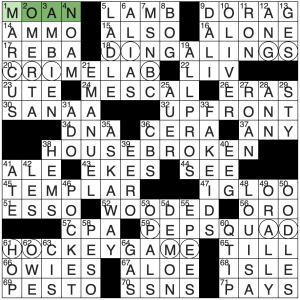 The circles didn’t make sense until I saw the revealer at 38A, but I also wasn’t paying a ton of attention since I was trying to zip around during the solve:

So yes, digs, crib, pad and home are all synonyms for house. Again, it’s Tuesday, so let’s keep it simple! We don’t want to think this hard this early in the week! Nice puzzle, Gary. Keep ’em coming! 4.2 stars today.