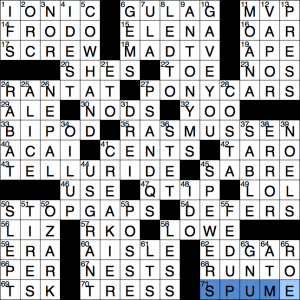 hello and welcome to episode #682 of matt gaffney’s weekly crossword contest, “Minty Fresh”. for this week 4 puzzle, the instructions tells us that This week’s 16-letter contest answer is what you must do to get the meta. okay. what are the theme answers? well, for the third week in a row (!), i haven’t solved the meta, so i’m guessing here, but the first steps are fairly clear:

i wonder if the puzzle title is suggesting that we need to make new words using these letters? that’s at least an idea, and could possibly fit with the “template” idea in the PRESS clue. i don’t know how we’re going to get 16 letters out of it, though. there are certainly plenty of answers in the grid where you could replace one of the letters with P/N/D/Q to get a new word. but that feels pretty underconstrained; i’d want the altered word to still fit the clue, and i don’t see any that do that.

there were a couple of clues in the fill that caught my eye, though: {Steep stones} for GEMS feels like it could have been something like CRAGS or CLIFFS if “steep” is used in the literal rather than metaphorical sense, and {Fish often smoked} SABLE definitely made me think SOLE first (which doesn’t fit), since i’ve never heard of smoked SABLE, or even that SABLE could refer to a fish as opposed to a mustelid (turns out to be short for sablefish, which is indeed a fish, but again, not one that i knew of). these would be interesting if the theme mechanic was “the revised entry can satisfy a different clue in the puzzle”.

for that matter, so would {Member of a certain NHL team} SABRE, since that could be 30 other things. (well, almost—some of the team names like wild, avalanche, and lightning don’t really have a singular word for a player on that team.) the ones that start with P/N/D/Q are PANTHER, PENGUIN, DEVIL, and DUCK, none of which are a one-letter change from a grid answer.

just for completeness, it’s definitely worth looking at the entries at 1, 5, 10 and 25 in the grid:

if there’s something we’re supposed to be doing with those, i don’t see what that something is.

as much as it pains me to punt three weeks in a row, here we are at noon and i have, once again, nothing. i can’t even muster a 16-letter guess, since i’d want it to be something involving COIN A NEW PHRASE and that’s only 14.