The Juggernaut, a digital publication focused on experiences of the global South Asian diaspora, has been running a crossword feature since April, with puzzles constructed by Sid Sivakumar. The Juggernaut Crossword is now accepting puzzle submissions from contributors of any experience level and cultural background; constructors identifying as South Asian are especially encouraged to submit. Sid will serve as crossword editor and has published a document with guidelines and specifications for constructors, as well as a South Asian-focused word list that anyone can freely use in crossword construction (including in puzzles not intended for The Juggernaut). Constructors should send theme queries to sid@thejuggernaut.com. Pay per puzzle is [a generous] $500.

DOOM SCROLLING is our theme (9d, [Habit of incessantly reading bad news online, and what’s happening in the circles]). Each successive entry has those circled letters—in order—scrolled down by one position with the bottom one coming back up to the top. 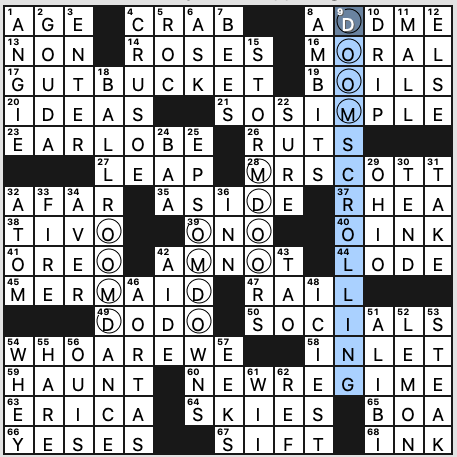 Very nice. All of these are nice entries and the theme helps the solver fill in the later entries while being modern and fun at the same time.

Also, it would be nicer if the circled groups of letters were evenly spread out. As it is, DOOM is up at the top of the grid, with all the rest bunched up in the center. Maybe it’s just not possible to lay them out more evenly given the letters involved, but it ends up looking somewhat inelegant this way. Still, I liked the theme and the entry choices.

There’s some colorful fill here, but some of it felt iffy. EARLOBE is fun, but I don’t think I’ve ever heard of a GUTBUCKET [Washtub bass in a jug band] (though it’s a great entry). “SO SIMPLE!” and MR. SCOTT are also great, but “WHO ARE WE?” [Meaning-of-life question] doesn’t feel very much in-the-language (“Who am I?” yes; “WHO ARE WE?” not so much). And NEW REGIME feels somewhat green painty. But it was all gettable and interesting at the very least. 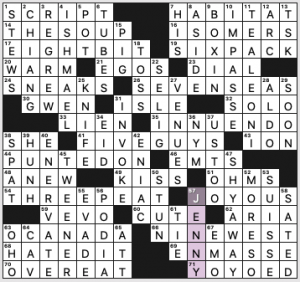 The theme is pitched at fans of 1980s hit songs, and I was a teenager when one-hit wonder Tommy Tutone’s “867-5309/Jenny” was popular. The theme is fine/fun, with EIGHT-BIT, SIX-PACK, SEVEN SEAS, FIVE GUYS, THREE-PEAT, O CANADA (not a number!), and NINE WEST giving the phone number and JENNY clued as 57d. [Woman in a 1982 hit who can be reached using the starts of the answers to the starred clues].

Now, the problem with the theme is the song itself. The video doesn’t reflect the lyrics. In the video, Jenny slips the guy her phone number. But the lyrics say “I know you’ll think I’m like the others before / Who saw your name and number on the wall,” the wall message promising “for a good time call…,” and the guy sings, “I need to make you mine.” So gross, right? Especially when you’ve heard of women being harassed by some a-hole writing her phone number on the wall in the men’s room, guaranteeing that a bunch of random dudes are going to call her looking for sex when she’s not at all a sex worker. I’m mad at how incredibly distasteful so many of the hit songs of my youth turn out to be. (Elton John & Kiki Dee’s “Don’t Go Breaking My Heart” doesn’t objectify or demean women. It’s a lovely 1970s tune! It’s not the norm.)

It’s a little bothersome that there are non-thematic 7s and 8s interspersed with the 7- to 9-letter theme answers. Putting that reservation aside, I liked THE SOUP, PUNTED ON and BOX IN, HATED IT (because of In Living Color), ISHMAEL, and the lovely SHY AWAY (from).

Does anyone really use the plural PODIA? I just did a Google news search and the first 20 hits include a bunch of Spanish-language links, one Polish link, and a couple talking about a company called Podia—so I’ll take that as a no.

Four stars for me, without the “ew, this song does not hold up” deduction. 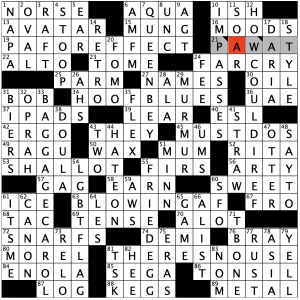 Rebecca Goldstein is making her AVCX debut today!  “Sad Trombone” was a LOT of fun to solve and figure out what was going on under the hood:

Indeed, each of the phrases above is missing a USE that would make it more sensical — PA(USE) FOR EFFECT, HO(USE) OF BLUES, WAX M(USE)UM and BLOWING A F(USE), HOW COULD I REF(USE), and BAGGAGE CARO(USE)L.  It’s a lovely debut, and has a lot of the great sense of humor I love from the AVCX puzzle

A few other nice grid bits: the word “freckles” is NORSE, the MOREL mushroom (state mushroom in MINN.), SEGA, STOOP, DARIA, “Weird FLEX, but OK”, the LGBT FLAG, and putting a FRIED EGG on breakfast pizza. 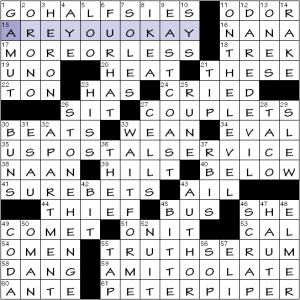 The grid features a full-spanning central across entry and triple-stacked 10s in the upper left and lower right.

The former is 35a [Organization the really delivers?] US POSTAL SERVICE. With diminished speed and efficiency under its current director.

The six stacked tens are nothing special individually, but it’s always nice to see hefty slabs like that in a grid.

And yes, this crossword was more than alright. 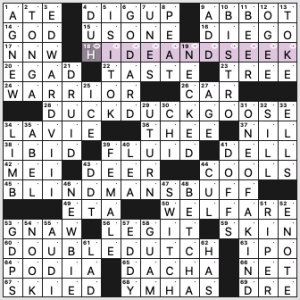 The core of today’s theme by Jeff Stillman is quite basic and list-y. Four theme answers are classic children’s games: HIDEANDSEEK, DUCKDUCKGOOSE, BLINDMANSBUFF and DOUBLEDUTCH. Three are clued as a specific vocation’s favourite, and then the fourth… isn’t.

The rest of the puzzle consists mostly of short answers, giving it an early week difficulty. I’m not sure the largely non-existent ENOTE was necessary for the grid, but ok.

I found this a smidgen easier than most New Yorker Wednesdays. I’m often on Liz’s wavelength, which is a pleasant place to be! 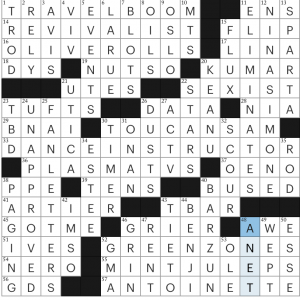 What I didn’t know before I did this puzzle: that Henrik Ibsen is buried in OSLO. I am not surprised.