Note: Fireball is a contest this week. We will post a review once the entry period closes. 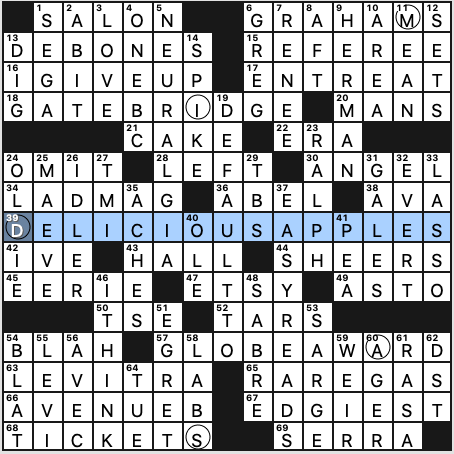 Multiple layers to the theme and a very nice aha moment made this fun to solve. And if you’re going to reference Willy Wonka, you get my vote. Well done, guys.

In the fill NEURALGIA [Shooting pain] is a new word to me but I’m glad to learn it. EASY READS and “I GIVE UP” are the other nice entries. I didn’t know LEVITRA [Its 2004 ads featured Mike Ditka] nor AVENUE B [1999 Iggy Pop album written while he lived in New York’s Alphabet City] which made that SW corner tough to crack.

Wow. I was especially loquacious today. I’ll try not to do that again. Anyway, a nifty puzzle. Four stars. 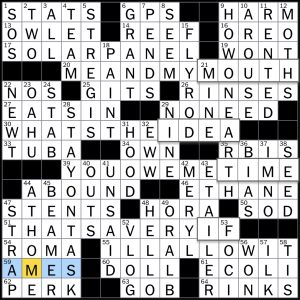 Joe Deeney’s puzzle for today’s NYT is a big deal.  No, literally, it’s a big deal.  We have four sets of raised squares in the app version of the puzzle, and I suspect the print version looks like this as well:

The slightly larger squares are indicate the word enclosed is BIG – ME AND MY (BIG) MOUTH, WHAT’S THE (BIG) IDEA, YOU OWE ME (BIG) TIME, and THAT’S A VERY BIG (IF).  It was a nice AHA when I solved this, but I’m not sure the formatting of the grid really feels “big” to me.

In case you haven’t seen an ophicleide (the instrument largely replaced by the TUBA), now we’ve both learned something!

Other grid bits of interest: OWLET delightfully clued as “A little snowy, perhaps?”, curling RINKS, the  ST REGIS hotel (which I was parsing forever as “Stregis?”), HOW ON EARTH, STAY ON TASK, and VLOG.

THEME: The word TOPS is anagrammed at the top of theme answers. 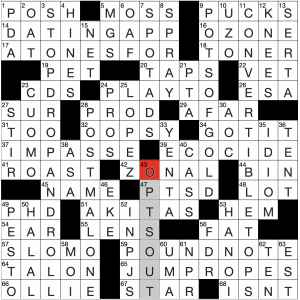 The theme isn’t anything new here, but the construction of this is remarkable in that there is A LOT of real estate being eaten up by all that theme, which (way more often than not) usually results in very cruddy fill. The fill here, however, sparkles for the most part.

Not much to grumble at either. Chris CUOMO is now the CUOMO of choice in crosswords, though I find his lack of coverage about his brother’s misgivings off-putting (I wouldn’t care much were it not so juxtaposed with his lavish praise and constant invitations for guest spots on his show during the height of the pandemic). And I don’t think I’ve seen OOPSY spelled like that before. I’m more of an OOPSIE kinda guy.

I learned that AKITAS clean themselves like cats. That’s fun. 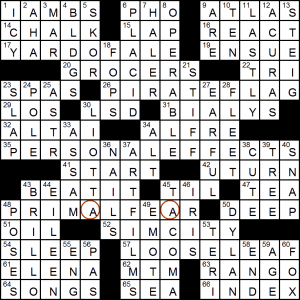 A fairly typical LAT theme is offered today by David Poole. LOOSE is an uncommon scramble signaler, but in any case, the revealer is LOOSELEAF and the word LEAF is hidden across four entries. Either A in PRIMALFEAR could be used to make LEAF, though the very specific text of the revealer suggests we use the second. The other entries are the obsolescent? YARDOFALE, the trickily clued as a standard PIRATEFLAG and PERSONALEFFECTS, which I don’t really associate with property insurance specifically, despite the clue.

With five theme entries, the grid was somewhat crowded, so not much too flashy. It felt like a lot of the medium length entries were names, albeit accessible ones.