I enjoyed this debut from the Inkubator. It’s a before-and-after theme with a little extra. Depending on how you count, there are either three or five theme entries. Something’s going on with the circle in the middle. I didn’t figure it out until I got to the revealer at 62a. [Permission to proceed….with this puzzle?] is GREEN LIGHT. That’s what goes in the circle. 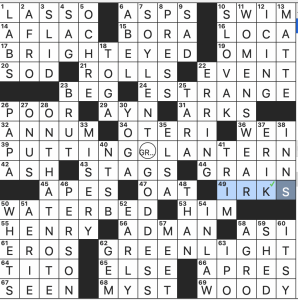 What I didn’t know before I did this puzzle: that baps are ROLLS (this entry is a dupe with the clue for 12d, which would have been easily avoidable, no matter how much I like cinnamon rolls). 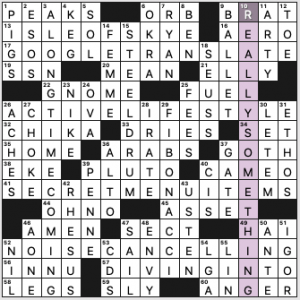 What on earth…? Another puzzle Brooke co-constructed, another puzzle with standard crossword symmetry? Fiiine, I can accept that, because the 15s are fresh and interesting. But the diagonal symmetry Brooke uses a lot—I’d have no problem contending with that in the NYT.

We’ve got four Across 15s bolted together by two Down 15s. I love GOOGLE TRANSLATE, really ought to embrace a more ACTIVE LIFESTYLE, pretty much never order SECRET MENU ITEMS, don’t need NOISE-CANCELLING headphones much (and might spell CANCELING with one L), and love A LONG TIME COMING. Boy, those 15s are REALLY SOMETHING!

There’s only room for a few more long entries in this grid, and they’re good too.

Trouble spot: The bottom left corner, with one word I’d never seen before and one usage I’d never seen before. 56a. [People of northeastern Canada], INNU? You can read about them here and learn some things if you didn’t know this, either. Then there’s 58a. [Streaks on the side of a wineglass], LEGS. Live and learn! Explanation here. Also new to me: 32a. [One-named rapper with the 2019 video “Can’t Explain It”], CHIKA. She hasn’t had any hit songs/albums yet, but she was nominated for a Best New Artist Grammy so she’s one to watch. And! The spoken portion before the song in the video below includes the words A LONG TIME COMING.

Theme: Common words with the prefixes PRE-, MID-, and POST- are re-imagined and clued wackily. 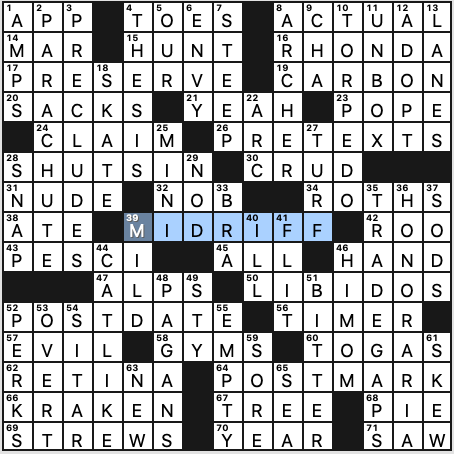 These are kinda cute. I especially liked MID-RIFF and POST-MARK. But the title would have you believe that it’s the prefixes that have changed meaning to be about time, but really it’s the latter half of each word that has changed meaning; the prefixes only change meaning when necessary. For example, the POST in POSTDATE means “after” in both the original word and in the clued entry, but in POSTMARK, it clearly changes meaning. If you look up the etymology of both PRESERVE and PRETEXTS, you find that the PRE originally did mean “before” although those meanings have evolved over the centuries.

On the other hand, as a constructor, I certainly would have excised PRECLUDES (3d) from this grid. It’s not thematic, and even though it’s in the Down direction, it’s quite noticeable.

Moving on, PARACHUTE, TRADE GAPS, HONORARIA make for fine long non-thematic entries. TORPEDO, CATLIKE, KRAKEN, and LIBIDOS are also colorful. And there’s very little in the way of CRUD (aside from CRUD).

Nice, if not entirely consistent theme. Some humor and very clean fill. 3.9 stars. 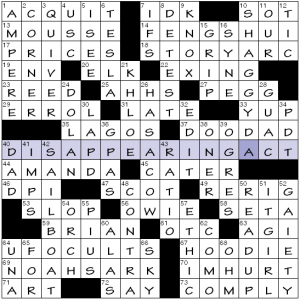 Ironically, the theme became self-evident rather quickly. Upon encountering the first asterisked answer I saw that the trigram ACT was pivotal, but it was a bit curious, as it was not functioning as a rebus square. Furthermore, the crossing entry had no use for it.

With the second theme entry also turning out to need ACT, I realized what was going on was a literal disappearing ACT. Since the Los Angeles Times crosswords don’t have titles, I knew it had to be the revealer, and sure enough that central spanner had the correct number of letters—I filled it in without even bothering to read the clue.

So that’s a big bunch of themers, with no symmetry as regards to placement or distribution. There’s no law set in stone that says one can’t do that, but it isn’t often seen.

Do note, however, that each of those theme answers is a legitimate word even in the absence of the ACT sequence: prices, exing (we usually see it as x-ing), reed, late, Brian, comply, tic, imps, for. 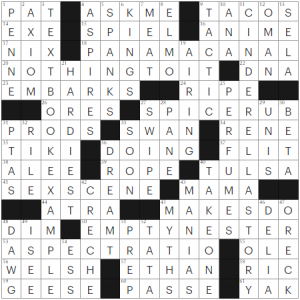 Just a smooth themeless here, with some nice long answers to hold it solidly together: two grid-spanning verticals and two offset stacks of eleven-letter acrosses.