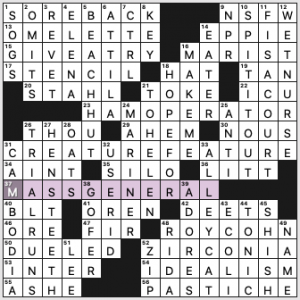 Kameron, as you may know, seems partial to lower-word-count themelesses, and this 66-worder is just as full of interesting, non-everyday fill as you’d expect from him.

Highlights: A SORE BACK (more in-the-language than most other SORE {body part}s would be), CREATURE FEATURE, MASS GENERAL, ROY COHN, PASTICHE, TRIAL RUNS, “TO HELEN,” an ALLEY CAT, “SPIT IT OUT!,” and FISA COURT. 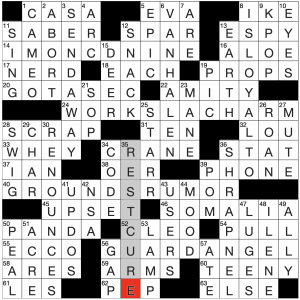 Another reliable Paul Coulter puzzle: nothing too flashy, but always well crafted and conceived. I really like the first two themers here. They follow the “go-big-or-go-home” rule for wackiness (see Evan Birnholz WaPo puzzles for a Masterclass in those types of themers). The only one that didn’t land solidly for me was GROUNDS RUMOR. I was unfamiliar with the base phrase GROUNDLESS RUMOR (I know it as BASELESS RUMOR), and the resulting entry felt a tad forced without the charm and ridiculousness of the first two.

REST CURE was new for me (needed every cross!). The clue for PEP might have some scratching their heads: [Dash forward and backward?]. The forward/backward portion of the clue refers to the palindromic nature of the word PEP. Dash seems a bit of an out-there way to clue PEP (my crossword instincts want to say ELAN!). So this clue might be a bit overly-clever, but no harm done.

IS LOYAL TO looks so strange in a grid! 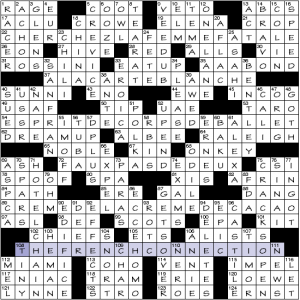 I enjoyed the cleverness and silliness of this theme. All the phrases are well-known and common enough borrowings in English. Left-right symmetry to accommodate the theme answers of different lengths (but it’s neat how three of them are 21-letter gridspanners). 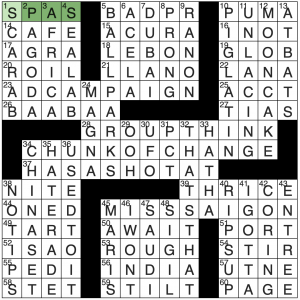 Got through this one fairly quickly, for once! Lots of fun stuff in here, and look at that wide open grid! At first glance it is hard to find the three-letter words in the grid, but there are a few of them right in the middle. But all in all, there are some really smooth sections of 4-, 5- and 6-letter words woven together quite well. There is almost nothing in here that seems forced. Extremely well done! 4.6 stars from me.

That is all for now! I think the NPL convention extravaganza puzzle is later today, so hopefully I can stay up that late! 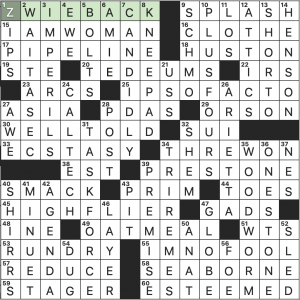 I messed this puzzle up during my solve. Lots of issues here, and I think I learned a new word or two! If I remember correctly, this is the pseudonym for Brad Wilber and Doug Peterson. Someone correct me if I am wrong! This has lots of trademark misdirection and clues that purposely make you think the tense is wrong. But in the end, as usual, all is fair! It seems as if sometimes these puzzles are slightly harder on long weekends; this may or may not be the case here! A solid 4.5 stars from me.

Everyone have a safe and healthy long weekend, if you’re fortunate enough to have Monday off!