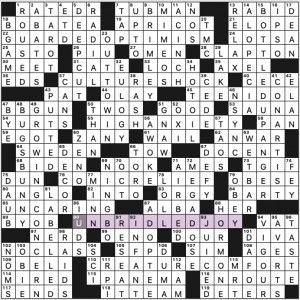 Quick recap, dinner is on its way. Theme is familiar phrases clued as if they’re the feelings experienced by specific individuals:

OUT TO WIN, BUGS BUNNY, DEEP CUT, CON ARTIST among the grid highlights. Overall experience so good, I forgave OENO-.

Did not know: 69d. [Silk Road city near the East China Sea], NINGBO.

Four stars from me. Enjoy the holiday if you’re not working!

Well. This is quite remarkable.

THEME: On what level? Let’s see… beginnings? America? The Declaration of Independence? Take your pick. 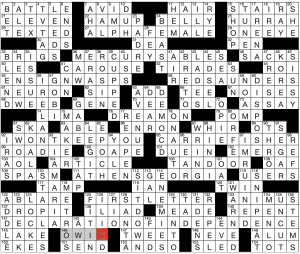 That theme is just fine on its own. But I suspected a Birnholzian layer immediately. That roughly translates to: Always look at the FIRST LETTERs of themers. You never know what you’re gonna get. So I patted myself on the back immediately as I saw the A and the M at the heads of the first two themers and thought AMERICA!

And indeed that is correct. What I didn’t see coming……….

125A [Highly important feature of seven answers (and every clue) in this puzzle] FIRST LETTER.

See that?! I’m right! Every first letter of the answer and… wait what? What’s that tossed-off parenthetical phrase in the clue? If I’m reading that correctly then….

Look at that. Look at the clues. And there it is.

We hold these truths to be self-evident, that all men are created equal, that they are endowed by their Creator with certain unalienable Rights, that among these are Life, Liberty and the pursuit of Happiness.

Okay. I’ve had a full 36 hours to digest this, and I’m still blown away. Is it a bit of a stunt puzzle? Sure… I guess you can say that. The stunt is ironically hiding at center stage, actually. But stunt puzzles are so often solely about the stunt. Not about solver enjoyment. In less deft hands, this could’ve been a nightmare. But with Evan at the helm, it’s truly a work of art. The stunt is modest in a sense (while simultaneously hogging the spotlight). It’s like if Nathan Lane and Matthew Broderick had been acting in chorus roles of a revival of The Producers for the entire show, but no one pointed it out until the end, and then it’s all your slack-jawed face was focused on.

So before criticism rolls in for the “stuntiness” of it, let’s not forget that this puzzle works primarily at a solver enjoyment level. The stunt is an *amazing* bonus. The puzzle itself is full of all that synergy that theme clues should have… If you don’t know who RED SAUNDERS is, then surely you know the first color in the rainbow, no? Never had the pleasure of driving 70 MPH into an unsuspecting deer whilst lighting a cigarette and cruising down I-84 in your MERCURY SABLE and are therefore unfamiliar with that particular no-frills model (not that that moment of my high school years sticks out as a vivid memory or anything…)? No prob. You know MERCURY is the first rock from the sun.

Then there’s the whole spelling of AMERICA in the first letters of the themers, which is trope that constant WaPo solvers are likely to take for granted. Evan employs that technique frequently. In fact, I’d flat out call it “his.” Still, it’s amazing. I never tire of it.

Then the whole clue thing. Didn’t see that coming at all. And that is exactly why it’s so brilliant. In retrospect, can I point to a clue or two and say “Yeah, I thought that was a tad awkwardly worded…”? Sure. But the fact that I didn’t immediately notice that there was a stunt happening in the clues (after solving nearly all of Evan’s published puzzles, WaPo or otherwise)… that’s quite remarkable. I know Birnholz clues. And while [Exchanged words on the phone] is indeed a weird way to clue TEXTED… it’s almost like he set himself up for this moment. Because that is indeed a very normal way for Evan to clue TEXTED (btw, anyone else want TALKED at first?).

This is a mic drop five-star (plus) moment. And I stopped star-rating Evan’s puzzles a while ago.

Hope the 1-star trolls stay under the bridge.

And, of course, Happy Fourth. America: It’s a Start. It’s the start of something great. We’re getting there. As long as we all keep trying.

P.S. Forgot to point out the oversized grid. 25×21. Doesn’t matter. Just, if I don’t point it out, then I’ll get called out for not pointing it out. So there. Done.

THEME: Phrases with the consecutive letters I-C-E in them must be parsed anew with the word ICE. 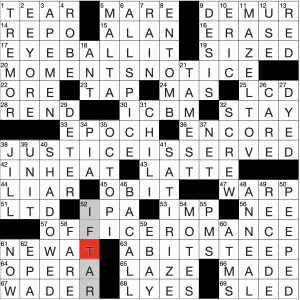 Three winners as themers. That’s all you need! I didn’t see the theme right away after uncovering MOMENT’S NOTICE and had to read the clue a couple of times (and then the title) before it clicked. A very satisfying click at that.

I found the puzzle in general waaaay more difficult than a typical Universal 15x. But in a good way. New for me: IFTAR, ANNEAL, ERIC Wareheim, Sarah Reich, “Treemonisha,” Valletta, DESIS (not new… just forgot it). I think that’s it. Clues in general just seemed tougher than normal (looking at you, APEMEN).

The title is a turn-off for me because I feel strongly that “under God” should not be in the Pledge of Allegiance. The phrase was only added in 1954, and logically, it has no business in an official pledge of a country that purports to espouse freedom of religion (which I also believe means freedom from religion). It was added as a response to the stated atheism of communism. The main instigator who got the phrase included was a Rev. George Docherty who, in a sermon at which Pres. Eisenhower was in attendance, stated, “To omit the words ‘under God’ in the Pledge of Allegiance is to omit the definitive factor in the American way of life…An atheistic American is a contradiction in terms. If you deny the Christian ethic, you fall short of the American ideal of life.” In my view, saying that non-Christians aren’t ideal Americans runs counter to the freedom of religion that this country was founded on. If you’re interested, here’s a history of legal challenges to the pledge.

But I needn’t have worried that any of that had anything to do with the puzzle which quickly won me over. 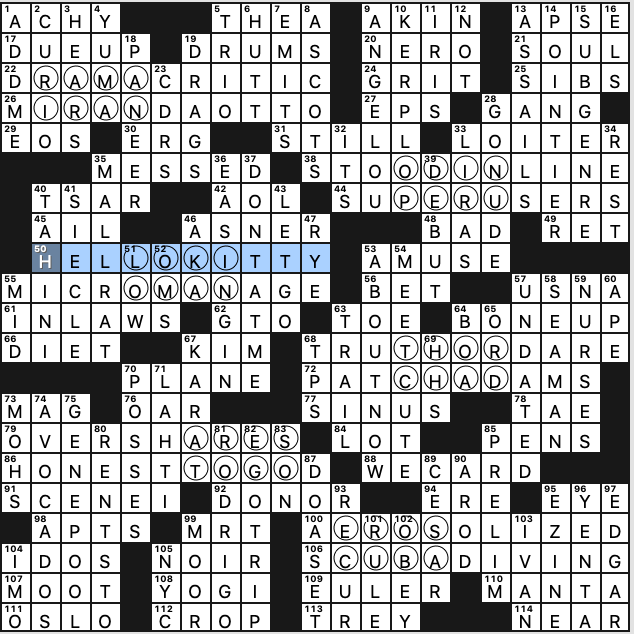 Final score: Hindu gods: 1, Norse gods: 3, Greek gods: 2, Roman/Judeo-Christian/Muslim/Native American gods: 0. It would have been nice if there was a little more balance in the gods chosen, but I’m not going to nitpick about that, because…

Wow, this is a really impressive execution of this theme. Just think on it for a bit. One, you have to find hidden god names and hidden country names in interesting entries. Two, you have to stack those entries so the gods and countries line up, and—crucially—they still allow you to have decent fill all around both entries. Three, you’ve got to fit all these paired theme answers symmetrically in the grid. And four, fill the rest of the grid with not-crud.

That’s a hugely tall order, but Joe meets it with flying colors.

Naturally, with so many constraints, a few bits of crosswordese creep in (THE A, CDRS). But there’s surprisingly little.

I didn’t figure out what was going on until I got to the revealer, which is the very last entry in the puzzle. 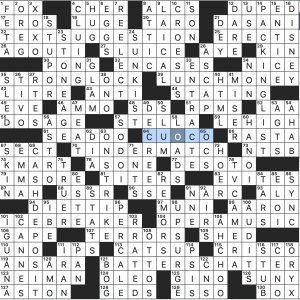 And the revealer: 130a [Shipping supply that links the answers to the starred clues] is BOX. That made me think BOX would actually be a link, following the first word and preceding the second. Nope. It follows both words. At least I think it does. I don’t know what a LIST BOX is, nor do I know what a BOX LIST would be. It would be a perfectly fine Sunday theme without that and without BATTER‘S CHATTER, which is not a phrase anyone uses. There’s a lot of CHATTER, no doubt, but that’s not the same thing. With those two….not my favorite theme.

What I didn’t know before I did this puzzle: that Kaley CUOCO played Penny on “The Big Bang Theory.” That probably has something to do with the fact that I’ve never seen the show. Wait, that’s not entirely true. I watched about five minutes of it a few years ago and was so annoyed by the gender garbage and stereotyping that I turned it off. Don’t @me about the smart women portrayed on the show. As pointed out in comments, it wasn’t Alyson Hannigan. I wonder who the hell it was? Anyway. And no, it was not Mayim Bialik – I know who she is.