No WSJ crossword today, as it’s a holiday for them.

I’ve written about a lot of Peter Gordon’s puzzles in the last few years. Oddly enough, this is the first non-contest puzzle in which the theme has eluded me. When I checked out Rachel’s column in Wordplay, I realized that once again I have been misled by the limitations of AcrossLite. I regularly look for puzzle notes for Evan’s WaPo puzzles. I don’t bother with other puzzles, especially not the Monday NYT, so I missed this: “In the print version of this puzzle, all of the squares preceding circled squares in the Across answers have been shaded.” I filled in the grid on the Times puzzle page so you could see it as it was intended to be solved.

Each circled letter is preceded by a word that carries the letter’s sound. 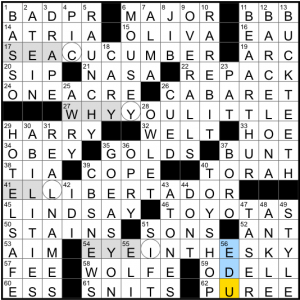 That’s the whole theme. It’s consistent and solid and certainly on a Monday solving level. I didn’t have all that much fun with it.

What I didn’t know before I did this puzzle: that BARCELONA is the only Spanish city to have hosted the Olympics.

Looks like we’ve got (half a) debut in the house. Huzzah! 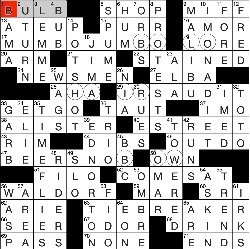 We’ve also got some circles in squares. What’s going on? Head down to the revealer at 63A [Overtime round, e.g. … and what a black square acts as for the circled words?] TIE BREAKER, and you’ll see that the circled squares each spell out a type of TIE.

When I see the name of Burnikel, I expect a nice easy ride, and it felt that way while I was doing the puzzle, which is why I was surprised to look up and see that my time was 2:26, which is more to be expected on Tuesday or Wednesday. I guess there were more proper names than I normally expect on Monday, although I’m never gonna cry when one of them is Idris ELBA, and I enjoy seeing ELIE clued as the designer Saab. (His couture line is to die for!) 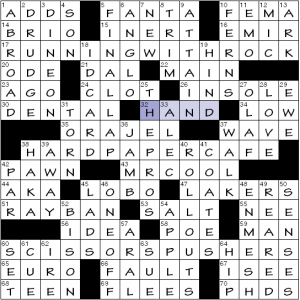 The theme today is the (32a) HAND game roshambo, but with a twist—the item that would normally complete each phrase is replaced by the item that wins against it in the game.

It’s a very tidy theme, and I appreciate how the items appear in the order it’s most often heard: ROCK, PAPER, SCISSORS. Notice, too, that each answer is a three-word phrase and each item appears in a different position (third, second, then first)—it seems to befit the cyclical nature of the theme.

In general the ballast fill is competent but not too exciting, which is (42d) PAR for the course on a Monday. A very nice crossword.

Hey besties, it’s great to meet y’all! I’m Malaika, and I’ll be blogging Monday’s USA Today puzzle for the foreseeable future. I’m so SO excited that I get to write about this refreshing (this is a normal adjective to use for crossword puzzles, right?) puzzle! If you’re new to the USA Today puzzle, you should expect subtle/light themes, ultra clean fill, and fresh (but straightforward) cluing angles. I’m thrilled that I get to exist in the same category (the category here is “USA Today Crossword Blogger”) as Sally Hoelscher– she’s been providing a review every day for over a year now on her blog! I hope it is fun for y’all to compare our thoughts. 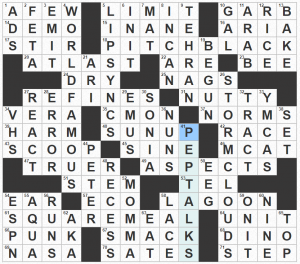 Anyways… on to the puzzle!

Theme: The word “perfect” can precede the first word of each of the theme answers

This is a very classic USA Today theme. I prefer when the title indicates which part of the theme answers is being used. (Like if “first perfect” happened to be a common phrase, but of course it’s not.) Laying the theme answers out in a pinwheel like this means that none of the fill needs to cross more than one of them.

I loved the two longer non-theme answers, PEP TALKS and LIP SYNCS– they both immediately put a picture in my head. It was also nice to get a SONIA Sanchez clue, and I love any PETER Piper reference because it reminds me of the Run-D.M.C. song, which was one of the first songs I memorized the lyrics to.

Hi all! Another newbie to Team Fiend here. Diary of a Crossword Fiend has been a huge resource to me over the years, and was part of the inspiration for the Daily Crossword Links newsletter I run, so I’m beyond thrilled to join the blogging team. 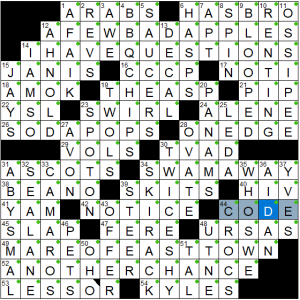 Fun grid from BEQ, with marquee entries A FEW BAD APPLES, I HAVE QUESTIONS stacked in the top, and MARE OF EASTTOWN and ANOTHER CHANCE in the bottom. Plenty of 6+ letter entries throughout the grid, too.

Other clues and entries of note:

29a – The VOLS [UT Athletes] play in Tennessee, not Texas. My first instinct was to consider possible abbreviations of “Longhorns.” Almost ten years after her retirement, legendary basketball coach Pat Summitt is still my first thought when I think of the Tennessee Volunteers.

47a – I needed all the crosses for [“The Ballad of the Goodly FERE” (Ezra Pound poem about the crucifixion)]. I am… not very well-read, but I’ll add this to my list!

19d – I filled in TWOLS ([Experienced law students, for short]) from the crossings, and gosh it looks weird in a grid if you didn’t see the clue. In my experience, “two-L” and “three-L” are just as common in the real world as “one-L”, so it’s nice to see, once I got over the double take.

32d – [Carnival’s location] had me running through Brazilian possibilities before landing on SEALANE – I was thinking the holiday, not the cruise line.

11d – OSSIPEE ([New Hampshire town named after an Algonquin tribe]) also claims to be where the snowmobile was invented. TIL! 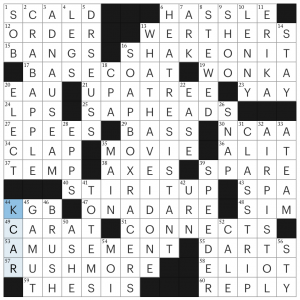 13a. [Original candy company?] –– What a clue for WERTHERS! Amusingly deceptive, and exciting to see it so close to WONKA.

40a. [Title shared by a Bob Marley song and a Patti LaBelle song] –– Interesting bit of trivia that inspired me to give both songs a listen.

5d. [Creator of Ish and his magic Ish wish dish] –– DR SEUSS has become a controversial figure as of late, in light of the racist images included in several of his books. Though this was an easily gettable entry, I was surprised to see his name appear.

9d. [Word that inspires you to go on?] –– My first instinct here was ALSO, which, unfortunately, fits the bill and shares a letter with SHOO. Served as a minor stumbling block for me.

16d. [Vehicles that go downhill fast] –– Oh how I wish this entry was ELECTRIC SLEDS! (So much so that I stubbornly refused to part with it long after it stopped making sense with the surrounding fill.) I confess that I’d never heard of SOAPBOX RACERS before today, but I’m now dying to try one out.

39d. [Ticket collector?] –– Fun clue for SPEEDER, turning what could have been a slightly contrived entry to a highlight of the puzzle for me.

45d. [Spectrum] — GAMUT is one of those quirky words that puts a smile on my face whenever I see it, and today was no exception.