This week we’re told, The answer to this week’s contest crossword is what’s involved in solving this crossword. There are five long themers, each with parenthetical numbers in the clues:

I am not a fast solver by any means (my usual pace is more Lazy Sunday), but I completed the grid in lightning speed (for me). I spotted LOBSTER right away, and the rest of step one fell quickly: each theme entry contained something “enclosed” in a shell: EGG, LOBSTER, ALMOND, PECAN, and OYSTER.

I attempted to apply the parenthetical numbers for awhile, but nothing clicked right away. So I used my tried-and-true meta-solving technique of going for a walk. I got three steps out my front door when the “aha” moment clicked: the numbers refer to the shell. For example: an “M” and “E” surround the EGG in the first themer: NUT(M)EGG(E)EK. Here’s a sign of a solid meta: I was convinced I had the right mechanism, even though I didn’t have the puzzle in front of me. The rest immediately fell into place after I returned: 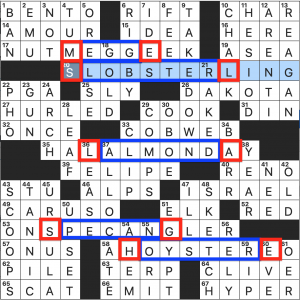 Applying the first and second numbers to the left and right sides of each shell reveals SHELLGAMES, our solution. Fun meta! I mentioned my solving speed because the grid can become taxed when serving a mechanism like this, but I found the fill easy-breezy. Let’s play one more shell game: Pulling Mussels (From the Shell), the song that has convinced the Internet that the title is British slang for sex (Chris Difford “made it up one fine day writing the words in a New York apartment”).