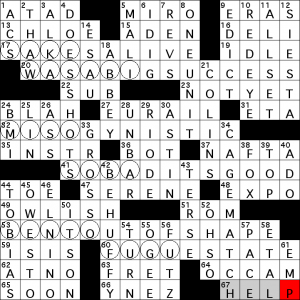 hello and welcome to episode #683 of matt gaffney’s weekly crossword contest, “First Taste”. for the first time in a month, i’m blogging a puzzle i was actually able to solve*, so there’s that. despite my losing streak, i went ahead and attempted this week 1 without the instructions, because hubris. what are the theme answers? the six long across answers all start with a japanese comestible/potable:

okay, so, about that asterisk: based on the title, i would have submitted UMAMI, which is the one of the five basic tastes with a japanese name. but after “solving” the meta, i did check the instructions, and what do you know? This week’s contest answer is a country. oops. i guess it’s just japan. well, at least i checked before submitting. missing three in a row was bad enough, there’s no need to extend the streak to four by whiffing on a week 1.

there’s not much else to say about the meta—it’s easy even by week 1 standards. but the grid itself is a marvel—despite six long theme answers, including two stacked pairs, it’s a 72-word grid, low enough to be a themeless. now, there are some less-than-lovely entries like the aforementioned BE HUFFY and a few others. but there’s also some cool medium-long fill like DOES SHOTS and CAGE MATCH (!). also {Italian for “large”} GROSSO reminded me of the italian footballer fabio GROSSO, who scored the winning goal against germany in the 2006 world cup semifinal and the clinching penalty kick in the final against france. he’s long since retired, and i was definitely rooting against italy in both of those matches, but i’ve really enjoyed watching italy play in the current euro 2020 (sic) championships. their semifinal against spain kicks off in a few hours, and you better believe i’ll be watching.

that’s all from me. have a great week!