You may have noticed that on Monday, Diary of a Crossword Fiend added the daily USA Today puzzles (edited by Erik Agard, who’s been addressing the industry’s gender imbalance by publishing mostly crosswords by non-male constructors) to our lineup, and we’re also delighted to welcome several new bloggers to Team Fiend! The USA Today puzzles will be reviewed by Malaika Handa, Emily Flynn, Sophia Maymudes, Darby Ratliff, and Nina Sloan. We’ve finally got a new roster for blogging the New Yorker themelesses now that Rachel Fabi has moved on to the NYT’S Wordplay: Matt Gritzmacher along with Nina and Malaika. The BEQ puzzles will be handled by Matt and Darby. (The rest of the puzzle/blogger lineup remains the same.) I’m excited to be able to bring you the puzzle perspectives of younger solvers to balance out the rather middle-aged lovelies who’ve been at Crossword Fiend for a while. It’ll be useful for constructors and editors to have that generational feedback, too.

To learn more about our newest Fiend writers, check out the “Meet Team Fiend” page. Everyone’s listed in reverse alphabetical order by last name because I grew up as a Z and was always last!—Amy 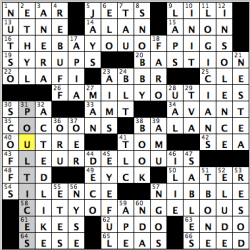 Hello everyone! Hope you all are doing well and that you had a safe time of it during the Fourth of July.

Today’s grid creates puns with the theme entries by adding the letters O-U to them to create some funny entries. For those in the know, seeing OU will remind people that those are the letters used when referencing the University of Oklahoma, in Norman, Okla. With that said, all I have to say right now is this…

Lots of chunkiness with the grid outside of the themes, with those paired nines going down looking pretty elegant. Of those, POULTICES is probably the pick of the litter for me since I think this is the first time I’ve ever come across the word in a crossword puzzle (31D: [Anti-inflammatory medicinal pastes]). LOGICIANS is pretty cool as well since I’m probably a closet Trekkie — at least with the original series (11D: [Folks who think like Spock]).  The clue for MAN was a refreshing one, and I’m sure I’ll be saying that when I head out the next couple of days when heat advisories are projected to be in effect (27D: [“Sheesh!”]). Hope you all will like the reviews of the USA Today puzzles, as its the beginning of AN ERA of wonderful blogs of those puzzles here on this site (3D: [“It’s the end of ___!”]). Welcome, new Fiendsters!

“Sports will make you smarter” moment of the day: JAYS (5D: [Toronto baseball team, for short]) – Can’t believe that it is almost 30 years since the Jays, aka the Toronto Blue Jays, made sports history by becoming the first Canada-based team to win the World Series, as well as the first non-US-based franchise to win a championship in either the NBA, NFL or MLB. Those 1992 Blue Jays went 96-66 and were not swept in any series that season, the first team to achieve that feat since the 1943 St. Louis Cardinals. Unlike the Redbirds, the Jays ended their season with a title, defeating Atlanta in six games to win the title. One year later, the Jays repeated as champions, defeating the Philadelphia Phillies in six games and producing a series-clinching walk-off home run from Joe Carter, one of the most dramatic ends to a baseball season ever. 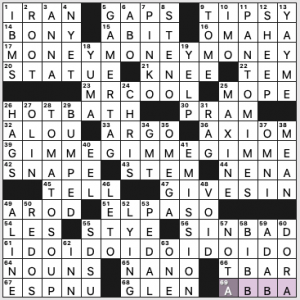 Cute theme with a 1970s pop music angle: ABBA is the 69a. [Pop group with the hits 17-, 39- and 61-Across], and those three themers all have reduplicative titles, clued as if they’re not the songs:

I didn’t actually know any of these songs back in the day—they were not the band’s biggest hits in the US. It bears noting that ABBA also recorded songs called “Honey, Honey” and “Ring Ring.” Guess that was kinda their thing?

Most relaxing fill: That HOT BATH and a bowl of TOMATO SOUP. Happy to see MAXINE Waters here.

Question: 5d. [User name on an Xbox], GAMER TAG. Is this a generic term (that I don’t know) or specific to the Xbox?

I see a bunch of entries that might give a new solver pause. That ALOU/OLIN crossing, a GLEN as a [Secluded valley] (I pretty much only see that usage in crosswords), A-LINE, dated IBMS …

What in the world is happening in this puzzle?! Or should I say WORWHATLD? Hehe. Had to.

THEME: Phrases that follow the pattern “____ in the ____” are represented literally. 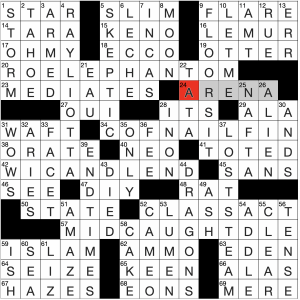 I don’t remember seeing this idea presented in Universal before, so I think it’s great to introduce this concept to more casual solvers that likely make up a large part of the Universal solving audience. Puzzles like this have potential to hook a solver and lead them down very deep and decades-long rabbit holes. I know because I’m currently blogging about a crossword- and puzzle like this are why.

The concept has been done many times over (very recently in the NYT ), but so have other theme types. This one just sticks out as “clever” because of the wacky looking themers, so when it’s repeated it’s more noticeable.

I think the very strong nudge in each of the clues is a tad unnecessary (I mean, why not just circle the letters if you’re going to point solvers in exactly the direction they need to go?) I can understand giving a more general hint in the first of the themers, but all of them?

And hey, I don’t like to directly compare specific puzzles to one another, especially across publications, but since I already did bring up the NYT puzzle with this concept published last week, let’s compare the execution. This one has four themers rather than six, and the resulting fill is so, so, so much better. Like night and day. So I much prefer Jared’s willingness to pull back and focus on four strong themers rather than cramming in more. Because wading through cruddy fill is always a ASPAINS (see middle-ish four letters first).

Also, fun way to start the puzzle at 1-Across with the simple * clue. 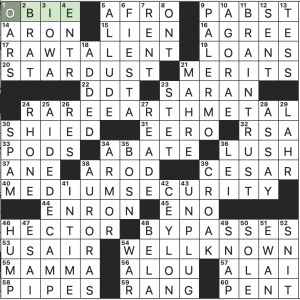 This was a quick solve for me. Nothing too hard in here. The theme answers all have to do with steak!

I don’t like to nitpick, but it would have been nice to include a revealer in here, which could simply have been an entry STEAK or something similar. Perhaps that may have constrained the fill too much. Some of you may not be big meat eaters, but that is OK! Even vegans should be familiar with these terms, even if the thought of RAW or RARE steak is terrifying! 4.2 stars today.

Matt Jones’s Jonesin’ Crossword, “Get It Together” – Derek’s write-up

We are going to postpone the regular Jonesin’ write-up until Thursday this week. There is something quite special going on with the puzzle. Please solve as you normally would, and check back to this site in a couple of days for the full story. Hopefully you are intrigued as to what is going on! Consider it sort of a contest puzzle, in a way!

See you on Thursday!

Ha! A perfect title for a puzzle with the revealer “I’D EAT MY SHOE!” (57a, [Hyperbolic pledge if the improbable were to happen, and a phonetic hint to the theme answers]). The other theme answers are food items with a homophone of “shoe” in them. 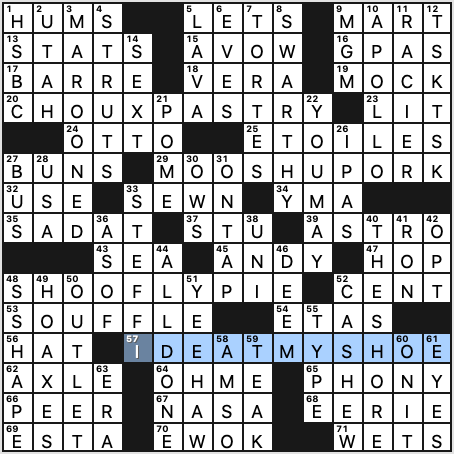 Cute. Although, with each clue starting with “What 57-Across might refer to…”, I thought 57a was going to be a person, so I was befuddled for a couple seconds when I got there. But aside from that, I’m impressed with these finds and that they all fit symmetrically. (I expect the constructor would have preferred I’LL EAT MY SHOE, but went with “I’D” to get it to fit. And in truth, it feels like “I’ll eat my hat!” is the more common phrase.)

In the fill, I love the word SWARTHY; it’s just a fun word to have around. MAROONED is good, as is “ALL DONE!” and “YEEHAW!” Not so sure about THE SHORE though. This grid’s a little heavy with the French with SOUFFLE and BARRE (not so bad) and ETOILES (a fair bit harder). I do like the staid “YOU MAY” [Formal allowance].

Cute puzzle with a little nits that are easy to look past. 3.75 stars.

Super excited to be joining Team Fiend on Tuesdays for the USA Today! What a great puzzle to start with as my first–and I even got a cookie when finished, too. 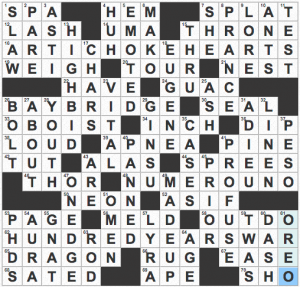 Today’s puzzle flowed well, though I did get hung up on a few clues, being misdirected slightly. The theme had a clear hint from the title, yet the first themer of ARTICHOKEHEARTS made me expect card suits rather than the clever actual theme of card games. It took my the whole puzzle to figure it out, since I was too focused on the clues and not thinking more about the theme in the midst of it, though I throughly enjoyed NUMEROUNO as I filled it in and I figured that a bridge was the connecter from San Fran to Oakland but BAYBRIDGE didn’t come to mind, only the Golden Gate for me at the time. Once complete, HUNDREDYEARSWAR helped me piece together the card game theme. As a kid I played many hours of “war” and even had a robot deck of cards for it! Looks like someone is selling the cards in sets of 8 on ETSY.com as “vintage”. With everything they saved, I wondered if my parents still have the deck packed away with all of the boardgames; might have to check during the next trip home. 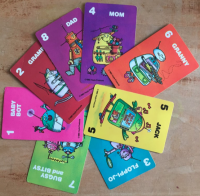 OREO snuck in at the end, which seems appropriate. Who doesn’t like a little sweet treat at the end of a meal…er, puzzle?