This week’s AVCX is a meta contest closing on Sunday, July 11. We’ll have a writeup available once the deadline has closed.

Theme: Certain two-word animals (real or fictional) are given jobs by adding the suffix -ING to their first words. 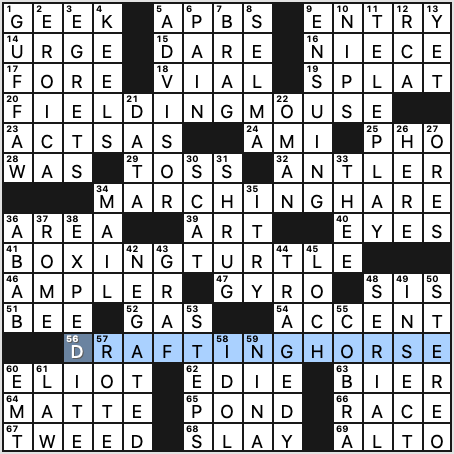 Another cute theme. I’m imagining these professionals engaging in their work with their service animals by their sides. The one who seems the most unsuited to their profession is the turtle, and that makes that one funnier. 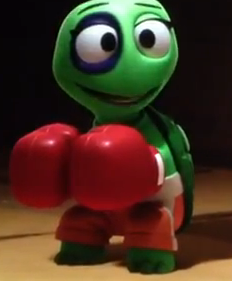 Roxy Boxy from a Pixar cartoon

My only nit is the clue for the last one. “Drafting” is not an activity a writer engages in, AFAIK. A writer may produce a draft, but I’ve never heard anyone call that process “drafting.” I’d have gone with an architect myself.

Looking at the fill, hmm, nothing jumps out as especially colorful. I struggled to piece together the Bee Gees song at 44d [1979 #1 hit for the Bee Gees], but then had an aha moment when the G fell into place to give me TRAGEDY. Everything else is fairly workmanlike…which turns out to be appropriate for the theme.

Cute theme. Not so much sparkle in the fill. 3.5 stars. 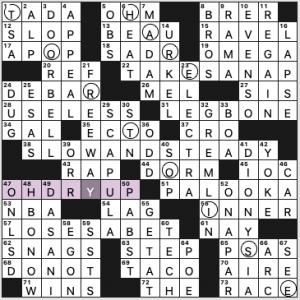 The theme is scattered all around the grid. The TORTOISE in circled squares on the diagonal from top left to bottom right competes against the HARE diagonally starting in square #6. 38a SLOW AND STEADY / 71a WINS / 72a THE / 73a RACE, the moral of the Aesop fable. The hare 22a TAKES A NAP and also 57a LOSES A BET. But hang on, this doesn’t work visually: The tortoise is leaping to every second square, racing to the far corner, while the hare takes a few baby steps. Is this tortoise not tearing through the grid pell-mell?

The diagonal entries mean plenty of compromises in the fill. Nobody loves to see a single ALP, DEBAR, ON LSD (memo to contructors: please do nix ONPOT from your word lists!), ECTO AIRE DONOT SSTS. Presumably the puzzle was constructed before HBO NOW fell into obsolescence last year.

And then there’s 47a. [“Quiet, you!,” quaintly], OH, DRY UP. Beg pardon?? I’ll send you $5 if you can prove you’ve ever said this out loud prior to this crossword’s publication.

Did not know but pieced together 41d. [Ancient Greek festival honoring the god of wine], DIONYSIA.

I don’t care for dupes, especially when they cross. BRER Rabbit crossing Warner BROS.? That’s br[oth]er and bro[ther]s, you know.

Super-smooth grid from Aimee this morning, and the stars of the show for me was the long downs. I cannot stomach ranch dressing, but dropped in JALAPENO POPPER [20a – Appetizer often served with ranch] pretty quickly and then got to enjoy all this goodness: 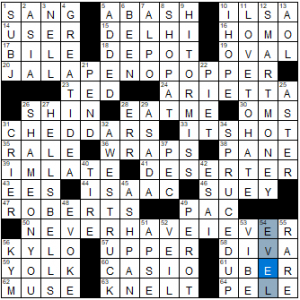 That’s eight flavor-filled clues and entries crammed into fifteen columns. A joy to solve. Other notes: 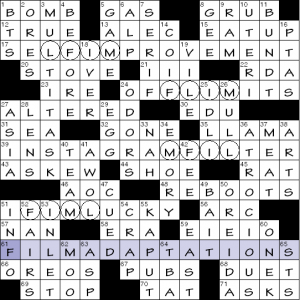 As one would expect, the various appearances of the tetragram are distinct permutations. Additionally, they all span at least two words. No flimflammery.

Since I’m obviously not going to share a Rush song here, there must be something else I can hook a video to. Hmm…

Hi folks! I’m Sophia, and I’m thrilled to be joining Team Fiend as your Wednesday/Thursday USA Today recapper. Let’s get into it!

Theme: MIDDLE TON – each theme answer has the letters “TON” in its center, and each “TON” is centered horizontally in the puzzle. 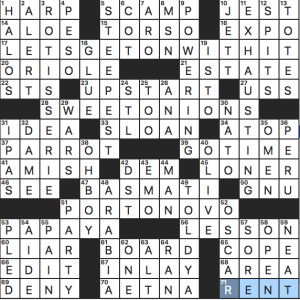 Today’s puzzle is a perfect example of why you should always read the title before solving the puzzle – the title acts as a revealer and perfectly explains the puzzle’s gimmick, giving the solver another hint at the theme. Figuring out the theme early definitely bailed me out on the final theme answer, as I didn’t know Benin’s capital (the name literally means “new port” in Portuguese).

I love how the puzzle’s use of mirror symmetry means that, even though the theme answers are all different lengths, the “tons” all line up in the center of the puzzle – very aesthetically pleasing. Mirror symmetry also allows for two fun longer pieces of fill in ROTISSERIE (a word it took me a few tries to spell correctly in the grid!) and EXHAUSTING. It’s worth nothing too that each “ton” is spread across multiple words, which made the puzzle more interesting than if each answer were a single long word with “ton” in the center. 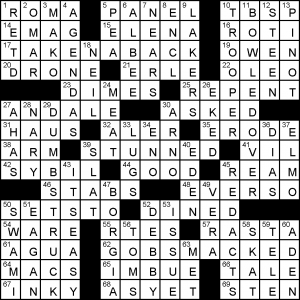 Today’s theme by Kurt Krauss is pretty basic in concept. We get a list of five synonyms for [Amazed]: TAKENABACK, BOWLEDOVER, STUNNED, DUMBSTRUCK and GOBSMACKED.

Even if you have a basic theme, a puzzle can still shine with a carefully filled grid. A few difficult names like EAGAN and ALBEE can actually be a good thing, but today was a full on assault of tired fill: is EMAG even real? ALER is apparently restricted to a very few newspaper headlines. SKAT and STEN are one a puzzle type entries, but today they cross?