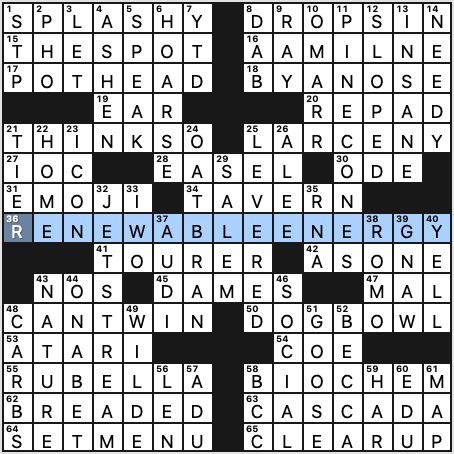 Conceptually, I’m struggling to make sense of this one. First, I wouldn’t equate the terms RENEWABLE ENERGY and “continuous power.” Second, how is “continuous” represented by having the words broken up by blocks? To me, it looks the opposite of continuous (i.e. interrupted). And the title seems nonsensical.

The fill is hit and miss. JET STREAM and PINE CONES are great, as is OAT BRAN, POTHEAD, and BY A NOSE. And then there’s TOURER, OMARR, REPAD(?!) and new-to-me CASCADA and Freddy ADU.

I’m still struggling with the theme which feels like it’s stretching some definitions too far. Three stars.

Definitely not blazingly hard or even hard-boiled. Each theme entry ends with a word that describes something that can be done to an EGG. I figured that out halfway through with help from the title. Peter made sure we got it by putting EGG as the revealer at 63d. 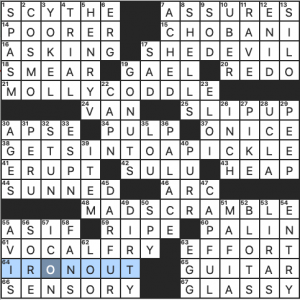 So that’s it. It’s a solid, consistent, accessible theme. I didn’t find it challenging or all that much fun. I am sure opinions vary!

What I didn’t know before I did this puzzle: that CAP‘N Crunch has a first and middle name: Horatio Magellan. 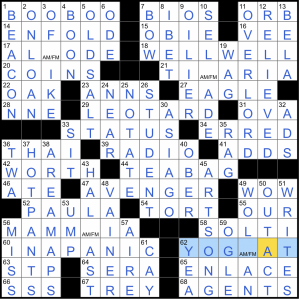 It took me a solid minute of staring at various grid quadrants to figure out what was going on with this Thursday’s NYT.  It was something rebus-y, but not in a consistent way across vs down:

Once you have all the squares put together, though, it’s really clear that it’s AM one way and FM another, bolstered by the revealer “It can be two-way … with a hint to four squares in this puzzle” resolving to RADIO.  All in all, it’s cute and had plenty to chew on.

Other grid bits of interest: Jules LEOTARD, a TEABAG “always getting into hot water”, IN A PANIC, BEACON, OLD SALT, OVERLORD, HOT PANTS, and OUTACT

THEME: Words reimagined as if they are titles for certain jobs. 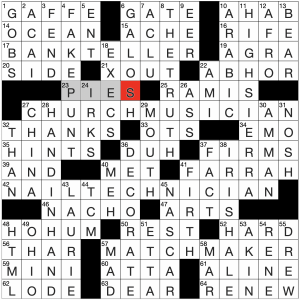 Solid, consistent puzzle with a clever idea. I like how the clues all change meaning completely and that they are all the same number of syllables with the same suffix. Gives it a rather poetic feel. The title makes me picture all of them as G.I. Joe-esque figures, which is a hilarious visual, especially for church organizer (organ-izer). I just picture a kindly old lady absolutely shredding on Jesu, Joy of Man’s Desiring in the style of Mannheim Steamroller. Then perhaps smashing it with a sledgehammer at the finale.

Theme: The last word of each theme answer forms a common phrase when followed by the word “interest”. 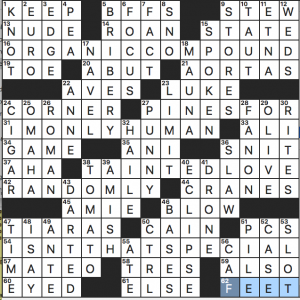 Fun, simple theme today from Wendy – I always like in “words followed by X” themes when X is a longer word that is used in different ways in each of the resulting phrases like it is here. It took me a while to parse “love interest” as a phrase, because I was still thinking about the monetary form of interest, so I had a mini aha-moment once I actually got it. The last three theme answers in particular shine in their own right – they’re all answers I would be happy to see in a themeless puzzle, which is a true sign of sparkle.

The grid felt very smooth today, and each section flowed well. This is probably due to the lack of 3-letter answers – there are only 9 in the entire grid! The wealth of mid-length answers kept the grid from feeling choppy, and kept me from having to stop and start in a bunch of different areas. As a trade off, there aren’t too many long bonuses, but the ones that we do get – ECLIPSE, BRIBERY, RANDOMLY PINES FOR (more fun to combine those two) – are all lovely.

Hey, y’all, I’m Darby. I’m pumped to be joining Team Fiend. It’s been such a resource to me and has given me a lot of insights into different puzzles and constructing styles. I hope you’ll enjoy my love for puns in puzzles and the occasional nerdy reference.

Kicking it off with Brendan Emmett Quigley’s Themeless Thursday “Think Fast,” 37A HOLLYWOODSTUDIO spanned the center of the grid as a clever answer to “Place where many people get shot.” If the target was a laugh, this was a direct hit. 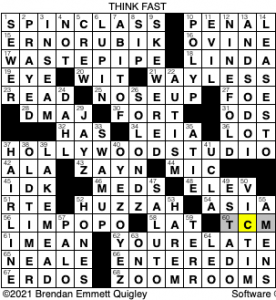 Some other fun clues:

23a — I love to READ [“Start a new chapter”] but struggled here at first. I should’ve taken it literally (or perhaps I should be READing more?)

34a — A less well-known Princess LEIA [“Princess who says ‘I knew there was more to you than money”] quote from Star Wars made my morning. It was definitely a little different from the usual “You’re a little short for a stormtrooper” or play on the “I love you”/”I know” clues that even I, a lifelong fan, paused before filling it in.

68a — ZOOMROOMS [“Modern day conference centers, or a jokey way to describe 1-Across and 37-Across”]  felt very appropriate in this brave new world of remote learning and virtual experiences, so it provided a pleasant final across clue for this puzzle.

Overall, this one was tough for me. The lower right corner had a tough combo of names with 65a NEALE [“Money Doesn’t Grow on Trees coauthor ____ Godfrey”] and 67a ERDOS [“Hungarian mathematician Paul” ]. 37d HAIRLINE [“One that gets wiped out during a recession”], 38d OLDTIMER [“Fogy”], and 57d PALO [“___ Alto”]  helped a bit in getting these, but I don’t think it saved the solvers.

Overall, still a solid start to my day, and it’s definitely made me excited to spend more time with BEQ puzzles. Too many names made for a difficult fill, but I appreciated the word play in clues like 37d HAIRLINE and some of the others I’ve mentioned above. 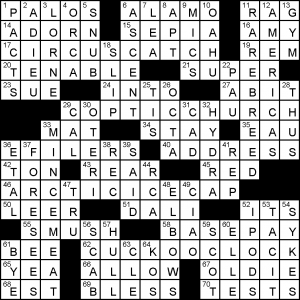 Another fairly uncomplicated theme, this time from Mark McClain, but a more interesting execution for me. The revealer is in the bottom left corner: FORESEES; interpreted as “four c’s”. Four long across answers have that letter configuration: CIRCUSCATCH, a new phrase on me, but evocative; COPTICCHURCH clued rather incongruously as a specific one not the entire body; ARCTICICECAP; and CUCKOOCLOCK.

Also, a much more controlled grid than yesterday, provided one buys EFILERS (that reminds me, July is tax month here…) But not much that jumps out at me as daring or unusual: SMUSH is just a fun word to say.